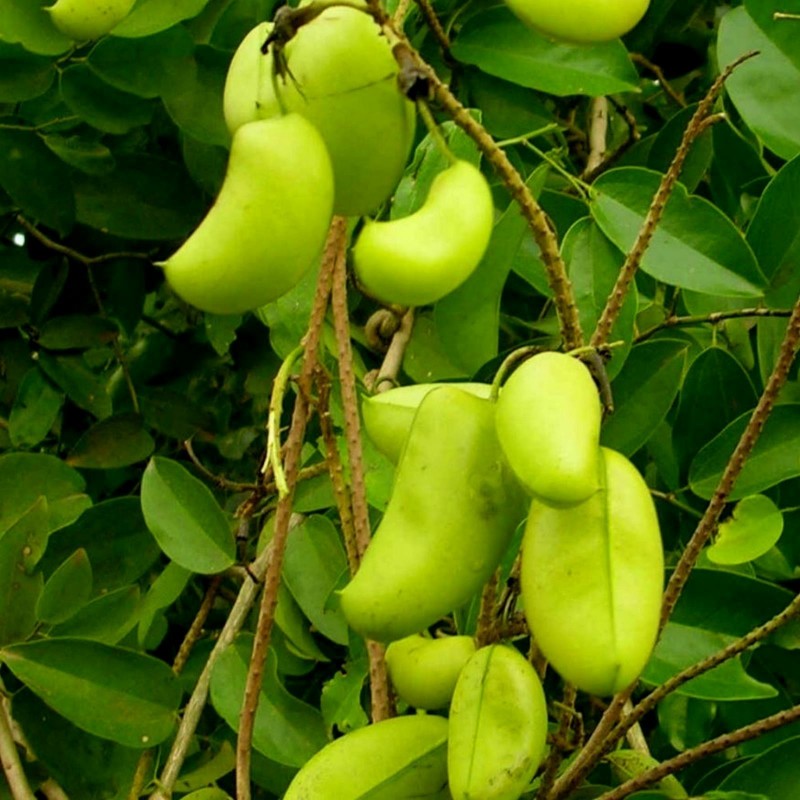 Griffonia simplicifolia is an evergreen, hard-wooded shrub or large climbing plant with short strong woody tendrils. It can grow to about 3 meters tall. A multipurpose plant with a wide range of medicinal uses

Griffonia simplicifolia is an evergreen, hard-wooded shrub or large climbing plant with short strong woody tendrils. It can grow to about 3 meters tall.

A multipurpose plant with a wide range of medicinal uses, some minor edible uses, and various miscellaneous uses, it is commonly harvested from the wild for the local community. The seeds are a commercial source of 5-HTP, a serotonin precursor widely used in the treatment of depression and other conditions. The seeds are collected from the wild on a commercial basis and are sold internationally in large quantities.

Even though Griffonia simplicifolia is reportedly common, the high commercial value of the seeds forms a serious threat. Destructive harvesting combined with high grazing pressure could contribute to the reduction of populations.

Although many species within the family Fabaceae have a symbiotic relationship with soil bacteria, this species is said to be devoid of such a relationship and therefore does not fix atmospheric nitrogen

The leaves are used in the production of palm wine and give the wine a bitter taste.

The sap that exudes from cut stems can be drunk to quench thirst.

The pulped bark is applied to syphilitic sores.

A leaf decoction is used as an emetic, cough medicine, and aphrodisiac.

The leaf sap and is drunk or applied as an enema to cure kidney problems.

The leaf sap is used as eye drops to cure inflamed eyes.

A paste made from the leaves is applied to burns.

A decoction of stems and leaves is taken as a purgative to treat constipation and is used externally as an antiseptic wash to treat suppurating wounds.

Chewing the stems is claimed to produce an aphrodisiac effect.

Stems and stem bark are made into a paste that is applied to decaying teeth.

The powdered twig bark, combined with lemon juice and Capsicum pepper, is applied to scarifications to treat intercostal pain.

An extract from the powdered roots has been used to treat sickle cell anaemia.

The seed is a commercial source of 5-hydroxytryptophan (5-HTP), a serotonin precursor. In humans, 5-HTP increases the synthesis of serotonin in the central nervous system and has been shown to be effective in treating a wide variety of conditions, including depression, fibromyalgia, obesity, chronic headaches and insomnia.

The leaves contain a volatile oil and coumarins.

The cyanoglucoside lithospermoside (= griffonin) has been isolated from the roots; it is the active ingredient against sickle-cell anaemia.

Isolectin B4, isolated from Griffonia simplicifolia, is used as a marker of small primary sensory neurons in neurological research[

The leaves are put in chicken pens to kill lice.

The roots are chewed and dried to produce a white powder that is used by women to powder their face.

A black dye is obtained from the leaves.

The stems are used to make baskets and cages.

The stems are beaten into fibres that serve as chewing sponges, a popular means of tooth cleaning in Ghana.

The stems and roots are used as chew-sticks to clean the teeth and maintain gum health and oral hygiene.

The seeds contain the compound 5-HTP, which is poisonous to certain insects, i.e. bruchids (Callosobruchus maculatus).

A number of lectins are found in the seeds. One of them is of the acetylglucosamine-group, which is commonly found in Poaceae and Solanaceae, but is rare in Fabaceae. Some lectins have insecticidal properties.

The pods are made into toy whistles and spoons.

The wood is hard and fairly tough. It can be bent and after crooking is used for making walking-sticks.