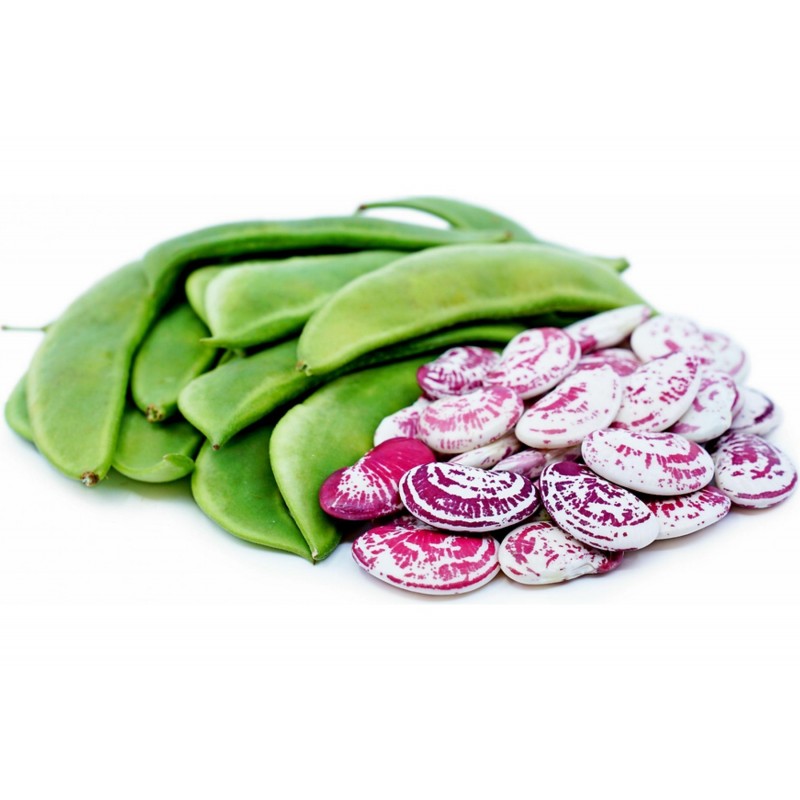 Originated in Peru, first recognized in the 1840s. This bean is also known as Chestnut Bean because of its flavor. The maroon markings remain even after cooking. Christmas Limas are now adapted to the high

Originated in Peru, first recognized in the 1840s. This bean is also known as Chestnut Bean because of its flavor. The maroon markings remain even after cooking. Christmas Limas are now adapted to the high desert region of the American Southwest.

Christmas Lima beans are tucked inside of a wide, curved and flat roughly four-inch green pod speckled with earthy brown tones. The pod is easily opened at its stringless seam, revealing three tender and semi-succulent creamy white beans that are variegated with raspberry-colored patterns. Eventually, the beans will harden and dry, their coloring reversing, with more of the beans' surface covered with tones of burgundy with white speckles. The flavor of Christmas Lima beans is buttery, sweet and reminiscent of chestnuts.

Christmas Lima beans, Phaseolus lunatus, are defined in culinary terms, as a legume, their appearance as a pole bean merely serving the purpose of the pod securing the beans inside through maturity. Unlike snap beans, the pod is not eaten. Christmas Limas are an heirloom variety of Lima beans, their place within the commercial market quite rare, especially because they are mainly grown as a fresh shelling bean and most legumes are grown and processed as a dry or canned bean.

Christmas Lima beans do not require soaking. They can be simply rinsed prior to preparation. They can be treated as a fresh shelling bean or a dry bean, thus their cooking time will vary depending on their age. Christmas Lima beans compliment a variety of flavors and dishes from season to region. Hearty Winter stews, spicy soups, and bright, fresh Spring salads are each enhanced by Christmas Lima beans' buttery texture and nutty flavor. Christmas Limas are rich enough to stand up to curries and chiles, indulgent meats such as lamb and pork. They can also be prepared simply with the addition of olive oil, fresh herbs such as mint, cilantro, and basil. Perfect companion ingredients include garlic, forest mushrooms and fresh hulled corn along with cheeses like feta and gorgonzola.

Christmas Lima beans were named for Lima, Peru, the capital city that they were first cultivated in the 19th Century, although their exact origins are unknown. Christmas Limas perform best in similar climates that other pole beans thrive in. Their growing season is boosted by warm soil, arid climates and long sunny days. Regions throughout the Americas create abundant harvests of the Christmas Lima bean, though their commercial recognition is nearly obsolete. They have actually been listed as an endangered heirloom vegetable variety, at risk of becoming void of the food chain - this status is designed to promote and encourage the Christmas Lima to be grown by farmers and gardeners, to ensure they remain in production and in turn continue to be appreciated by consumers for decades and centuries to come.