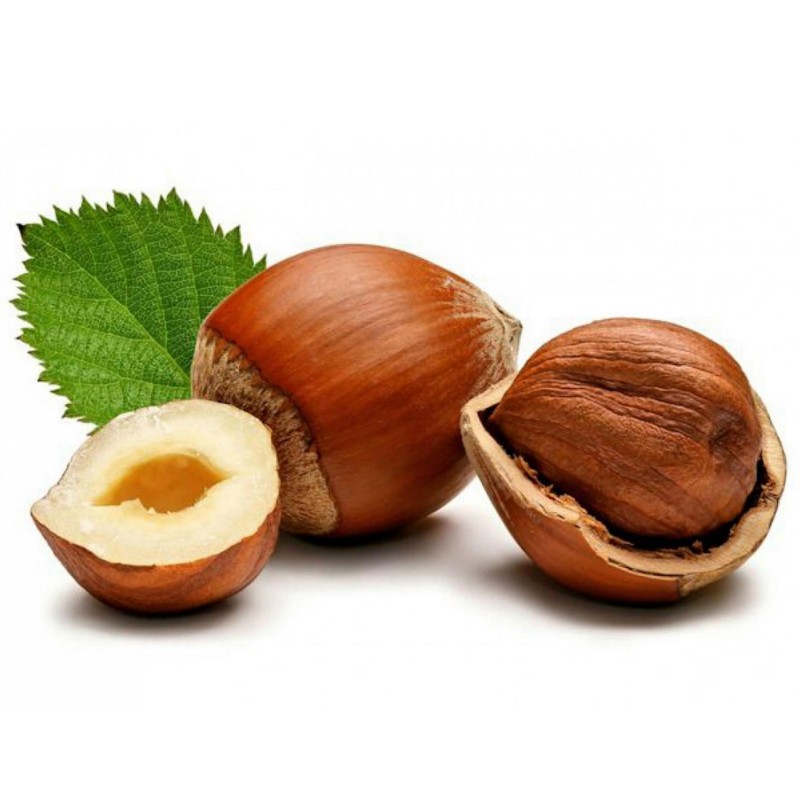 A hazelnut is the nut of the hazel and is also known as cobnut or filbert nut according to species. A cob is roughly spherical to oval, about 15–25 mm long and 10–15 mm in diameter, with an outer fibrous husk

A hazelnut is the nut of the hazel and is also known as cobnut or filbert nut according to species. A cob is roughly spherical to oval, about 15–25 mm long and 10–15 mm in diameter, with an outer fibrous husk surrounding a smooth shell. A filbert is more elongated, being about twice as long as it is round. The nut falls out of the husk when ripe, about seven to eight months after pollination. The kernel of the seed is edible and used raw or roasted, or ground into a paste. Hazelnuts are also used for livestock feed, as are chestnuts and acorns. The seed has a thin, dark brown skin, which is sometimes removed before cooking.

Hazelnuts are produced in commercial quantities in Turkey, Italy, Greece, Georgia, in south of the Spanish region of Catalonia, in the UK county of Kent and in the American states of Oregon and Washington. Turkey is the largest producer of hazelnuts in the world with approximately 75% of worldwide production.

Hazelnuts are used in confectionery to make praline, and also used in combination with chocolate for chocolate truffles and products such as Nutella and Frangelico liqueur. Hazelnut oil, pressed from hazelnuts, is strongly flavoured and used as a cooking oil.

Hazelnuts are rich in protein and unsaturated fat. Moreover, they contain significant amounts of thiamine and vitamin B6, as well as smaller amounts of other B vitamins.

In 1995, evidence of large-scale Mesolithic nut processing, some 9,000 years old, was found in a midden pit on the island of Colonsay in Scotland. The evidence consists of a large, shallow pit full of the remains of hundreds of thousands of burned hazelnut shells. Hazelnuts have been found on other Mesolithic sites, but rarely in such quantities or concentrated in one pit. The nuts were radiocarbon dated to 7720+/-110BP, which calibrates to circa 7000 BC. Similar sites in Britain are known only at Farnham in Surrey and Cass ny Hawin on the Isle of Man.[2][3] See also Sruwaddacon Bay, Kilcommon, Erris, County Mayo, Ireland.

This discovery gives an insight into communal activity and planning in the period. The nuts were harvested in a single year, and pollen analysis suggests the hazel trees were all cut down at the same time.[3] The scale of the activity, unparalleled elsewhere in Scotland, and the lack of large game on the island, suggest the possibility that Colonsay contained a community with a largely vegetarian diet for the time they spent on the island. The pit was originally on a beach close to the shore, and was associated with two smaller, stone-lined pits whose function remains obscure, a hearth, and a second cluster of pits.[2]

Because hazelnuts do not generally need to be toasted, indeed Kentish Cobnuts are still traditionally sold fresh, it has been speculated this was done to make them more digestible for children. Toasting the nuts was thought to increase how long they would keep, and they have historically been a useful food for mariners because they keep well.

Hazel has been grown historically in coppices for use in wattle and daub buildings, and in hedges. The Romans cultivated hazelnuts including in Britain, although there is no evidence that they spread specific cultivars. Cultivated varieties have been grown since at least the 16th century, with a great increase in varieties during the 1800s. In particular, the first really widespread cultivar, the Kentish Cobnut, was introduced in 1830.

The traditional method to increase nut production is called 'brutting', which involves prompting more of the trees' energy to go into flower bud production, by snapping but not breaking off the tips of the new year's shoots six or seven leaf groups from the join with the trunk or branch, at the end of the growing season. The traditional term for an area of cultivated hazelnuts is a plat.

The harvesting of hazelnuts is done either by hand or by manual or mechanical raking of fallen nuts. Common hazel is widely cultivated for its nuts, including in commercial orchards in Europe, Turkey, Iran and the Caucasus. The name "hazelnut" applies to the nuts of any of the species of the genus Corylus. This hazelnut, the kernel of the seed, is edible and used raw or roasted, or ground into a paste. The seed has a thin, dark brown skin, which has a bitter flavour and is sometimes removed before cooking.

The top producer of hazelnuts, by a large margin, is Turkey, specifically Ordu and Giresun Province. Turkish hazelnut production of 625,000 tonnes accounts for approximately 75% of worldwide production.[5]

In North America: in the United States, hazelnut production is concentrated in Oregon; they are also grown extensively just to the north, in the Fraser Valley of British Columbia, Canada. In 1996, the in-shell production in Oregon was about 19,900 tons (18,000 tonnes), compared to 100 tons (91 tonnes) in Washington. The hazelnut is growing in popularity in the U.S., where the Hazelnut Marketing Board was established in 1949 by Federal Hazelnut Marketing Order section 982.

Hazelnuts are also found in the Pangi Valley of Chamba district in India, where they are known as thangi.

The many cultivars of the hazel include: 'Barcelona', 'Butler', 'Casina', 'Clark' 'Cosford', 'Daviana', 'Delle Langhe', 'England', 'Ennis', 'Fillbert', 'Halls Giant', 'Jemtegaard', 'Kent Cob', 'Lewis', 'Tokolyi', 'Tonda Gentile', 'Tonda di Giffoni', 'Tonda Romana', 'Wanliss Pride', and 'Willamette'.[6] Some of these are grown for specific qualities of the nut; these qualities include large nut size and early- and late-fruiting cultivars, whereas others are grown as pollinators. The majority of commercial hazelnuts are propagated from root sprouts.[6] Some cultivars are of hybrid origin between common hazel and filbert.[7] One cultivar grown in Washington state, the 'DuChilly', has an elongated appearance, a thinner and less bitter skin, and a distinctly sweeter flavor than other varieties.

Turkish hazelnuts are not to be confused with the wild hazelnut of Turkey, Corylus colurna.

Hazelnuts are harvested annually in midautumn. As autumn comes to a close, the trees drop their nuts and leaves. Most commercial growers wait for the nuts to drop on their own, rather than use equipment to shake them from the tree.

Four primary pieces of equipment are used in commercial harvesting: the sweeper, the harvester, the nut cart and the forklift. The sweeper moves the nuts into the center of the rows, the harvester lifts and separates the nuts from any debris (i.e. twigs and leaves), the nut cart holds the nuts picked up by the harvester, and the forklift brings a tote to offload the nuts from the nut cart and then stacks the totes to be shipped to the processor (nut dryer). The sweeper is a low-to-the-ground machine that makes two passes in each tree row. It has a 2 m belt attached to the front that rotates to sweep leaves, nuts, and small twigs from left to right, depositing the material in the row's center as it drives forward. On the rear of the sweeper is a powerful blower to blow material left into the adjacent row with air speeds up to 90 m/s. Careful grooming during the year and patient blowing at harvest can eliminate the need for hand raking around the trunk of the tree, where nuts can accumulate. The sweeper prepares a single center row of nuts narrow enough for the harvesting tractor to drive over without driving on the center row. It is best to only sweep a few rows ahead of the harvesters at any given time, to prevent the tractor that drives the harvester from crushing the nuts that may still be falling from the trees. Hazelnut orchards may be harvested up to three times during the harvest season, depending on the quantity of nuts in the trees and the rate of nut drop as a result of weather.

The harvester is a slow-moving machine pulled by a tractor, which lifts the material off the ground and separates the nuts from the leaves, empty husks, and twigs. As the harvester drives over the rows, a rotating cylinder with hundreds of tines rakes the material onto a belt. The belt takes the material over a blower and under a powerful vacuum that sucks the lightweight dirt and leaves from the nuts, and discharges it into the orchard. The remaining nuts are conveyed into a nut cart pulled behind the harvester. Once a tote is filled with nuts, the forklift will haul away the full totes and bring empties back to the harvester to maximize the harvester's time.

Two different timing strategies are used for collecting the fallen nuts. The first is to harvest early when approximately half of the nuts have fallen. With less material on the ground, the harvester can work faster with less chance of a breakdown. The second option is to wait for all the nuts to fall before harvesting. Though the first option is considered the better of the two,[10] two or three passes do take more time to complete than one. Weather must also be a consideration. Rain inhibits harvest and should a farmer wait for all the nuts to fall after a rainy season, it becomes much more difficult to harvest. Pickup also varies with how many acres are being farmed and the number of sweepers, harvesters, nut carts and forklifts available.

A dry orchard can be dusty, so equipment operators should wear breathing protection. Conversely, if it is too wet, mud cakes in the machinery and moisture weighs down the material, making it impossible for the equipment to function without picking up large quantities of mud.

Hazelnuts are used in confectionery to make some pralines, in chocolate for some chocolate truffles, and in hazelnut paste products. In Austria (especially Vienna), hazelnut paste is an ingredient in the making of tortes (such as Viennese hazelnut torte) which are famous there. In Kiev cake, hazelnut flour is used to flavor its meringue body, and crushed hazelnuts are sprinkled over its sides. Dacquoise, a French dessert cake, often contains a layer of hazelnut meringue. Hazelnut is a primary ingredient of the vodka-based liqueur frangelico. Hazelnuts are used abundantly in Turkish cuisine especially on the Pontic coast of Anatolia. In Georgian cuisine, traditional snack churchkhela and sauce satsivi are often cooked with hazelnuts (along with walnuts).[11]

Hazelnut-flavoured coffee seems (to many users) to be slightly sweetened and less acidic, though the nut is low in natural saccharides.[citation needed] The reason for such perception is not yet understood.

Over 2,000 tonnes are imported annually into Australia, mostly to supply the demand from the Cadbury-Schweppes company. Hazelnut oil pressed from hazelnuts is strongly flavoured and used as a cooking oil.

Common hazel plants are eaten by these species of Lepidoptera.

Hazelnuts have a significant place among the types of dried nuts in terms of nutrition and health because of the composition of fats (primarily oleic acid), protein, carbohydrates, vitamins (vitamin E), minerals, dietary fibers, phytosterol (beta-sitosterol), and antioxidant phenolics[13] such as flavan-3-ols.