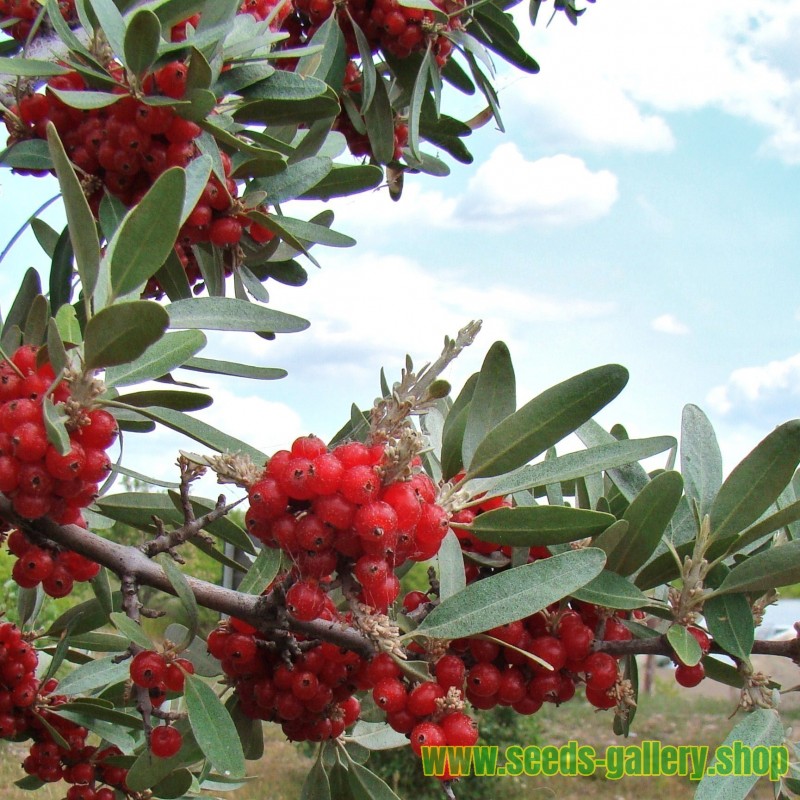 Hardy, Adaptable, Easy to Grow, Fast Growth, Edible Fruits, Attracts Birds, Wildlife Food/Shelter, Cold, Heat, Drought, Salt and Wind Tolerant, Nitrogen Fixing.
Shepherdia canadensis, also known as Russet Buffaloberry, Soopolallie, Soapberry, or Foamberry, is one of a small number of shrubs of the genus Shepherdia bearing edible red berries. The berries have an extremely bitter taste. The plant is a deciduous shrub found in open forests and thickets all over North America. Its northern limit is around the Arctic Circle. The shrub reaches a height of 3 to 13 feet. Fruits are extensively collected by some Canadian First Nations peoples such as Nlaka'pamux (Thompson), St̓átimc and Secwepemc (Shuswap) in the province of British Columbia. The bitter berries are not eaten directly but rather processed as sxusem ("sxushem") or "Indian ice-cream". Branches bearing fruit are hit with a stick and only the very ripe fruits that fall off are collected. A clean mat or tarpaulin is placed below the bush for collection. The berries are later placed into a great bowl that is absolutely free of oil or fat and are mixed with some sweet fruit such as raspberries. The mixture of berries is crushed and vigorously beaten in the manner of whipping cream in order to raise the typical foam of the sxusem confection. Sxusem has an agreeable blend of sweet and somewhat bitter tastes, possibly comparable to that encountered in sweetened coffee. The substance is believed by the First Nations peoples who prepare it to have many healthful properties, but the saponin chemicals making up the foam may also cause gastrointestinal irritation if consumed greatly. Native theme restaurants in British Columbia have occasionally had sxusem on the menu in recent years.
Leaf: Alternate, simple, elliptical to ovate, entire margins, 1 to 2 inches long, somewhat thickened dark green above with numerous silvery white scales, silvery white below with red-brown scales.
Flower: Dioecious; male and female flowers both light yellow-green, small (1/6 inch) and inconspicuous, appearing in early spring.
Fruit: A bright red drupe-like achene, 1/3 inch long and somewhat elongated, generally with a few silvery scales, ripen in mid to late summer and often occur in great abundance.
Twig: Slender, light brown and covered in numerous reddish brown, scruffy scales; buds stalked with valvate scales, flower buds more round.
Bark: Shiny reddish gray with numerous lenticels that develop into larger cracks and splits.
Form: A small shrub reaching up to 6 feet in height (occasionally much larger) with a dense rounded crown.
Other Names: Russet Buffaloberry, Russet Buffalo berry, Hippophae canadensis, Rabbitberry, Foamberry Soapberry, Soopalollie, Canadian Buffaloberry
Zone: 2 to 6
Growth Rate: Fast
Plant Type: Deciduous Shrub
Family: Elaeagnaceae
Height: 6 to 8 feet
Spread: 6 to 8 feet
Shape: Upright, rounded
Bloom Time: April-May
Bloom Color: Yellow
Flower/Fruit: Small, inconspicuous, yellow flowers are followed by yellowish-red, oval-shaped fruits.
Sun: Sun-Part Shade
Drought Tolerance: High
Water: Medium
Maintenance: Medium
Site Requirements/ Soil Tolerances: Easily grown in average, medium, well-drained soil in full sun to part shade. Tolerates wide range of soils. Very hardy and adaptable. Give it plenty of room to spread.
Culture: Can be pruned to a small tree. Remove root suckers and runners to control any unwanted spread of the plant. To keep it at a low height, cut it back to knee high every 5 to 10 years. If it gets too leggy, it can be cut back to the ground and it will come back bushier and with more berries the next year.
Uses: Wildlife shelter, screens, windbreaks. Naturalize in open woodland areas where it can be allowed to spread. Erosion control on slopes. Native plant gardens. Informal hedge. Good for dry, salty, high-pH soils, such as along highways.
V 64 (5 S)
27 عناصر