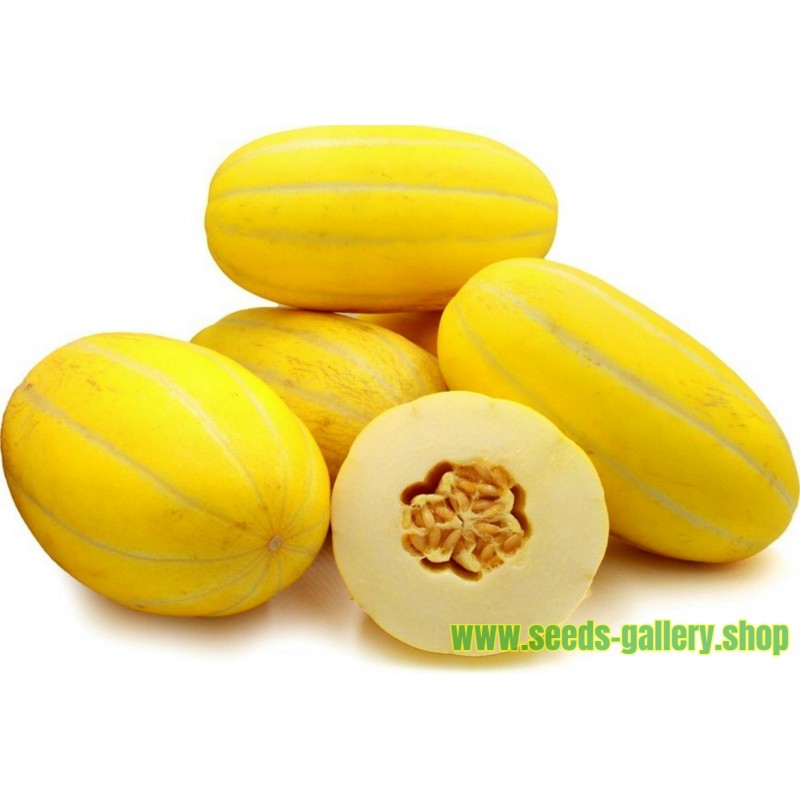 The Sun Jewel melon is oblong with gently blunted ends, averaging 18 centimeters in length. It has a buttery yellow skin with shallow white sutures that run end to end. The inner flesh is translucent white with a crisp

The Sun Jewel melon is oblong with gently blunted ends, averaging 18 centimeters in length. It has a buttery yellow skin with shallow white sutures that run end to end. The inner flesh is translucent white with a crisp yet juicy consistency. When ripe, the melon's flesh has subtly sweet aroma of bubblegum and pear offering a flavor that is a cross between cucumber and honeydew. The fruits are usually heavy between 250 and 400 grams. Though commonly served peeled, the melon is known to be completely edible from the seed to skin. It is highly perishable and is recommended to be eaten within one week of harvest.

Sun Jewel melons are available in the late summer and fall.

The Sun Jewel melon is also known as Chamoe or simply Korean melon, which is a bit of a broad term but quite accurate since the melons are ubiquitous in Korea come summertime. Botanically a variety of Cucumis melo, the Sun Jewel is technically a sweet melon, but often treated more like its cousin the cucumber, as in savory dishes and pickling applications. It its homeland in Korea, an exhibition space showcases the history and cultivation of the Sun Jewel melon at the Korean Melon Ecology Center.

Sun Jewel melons are rich in vitamins A and C.

The Sun Jewel melon has a lower than average brix level (approximately 7 or 8) and slightly vegetal characteristic making it equally appropriate for savory and sweet dishes. They are most often simply served chilled, with the yellow rind peeled off, and the sweet seeds and pith intact. Chop and add to sweet or savory salads, serve atop desserts or with yogurt as a breakfast item. Pureed, it can be used to make smoothies, ice cream or other frozen desserts. Use under ripe fruits to make quick pickles or kimchee. Sun Jewel melon pairs well with cucumber, mint, ginger, citrus, berries, lychee, shrimp, coconut milk, feta cheese and chili powder. Once cut, refrigerate in a plastic bag or sealed container and consume within two to three days.

In its native land of Korea, the Sun Jewel melon is made into a pickle known as chamoe jangajji. The fruit has adopted many aliases throughout the Asian countries in which it is enjoyed. In China, it is known as Huangjingua or Tian Gua, in Japan as Makuwa, in Korea as Chamoe and in Vietnam as Dura Gan.

Sun Jewel melons have been enjoyed in Korea for hundreds of years, with images of the fruits appearing on 12th century celadon from the Goryeo Dynasty. Originally, the melons were suspected to be a native of India, eventually making their way to China and subsequently Korea via the Silk Road. It is also thought that some green varieties, both with and without stripes, may have been a result of wild melons growing in ancient China. They are relatively drought tolerant plants if grown in moisture retentive soils.