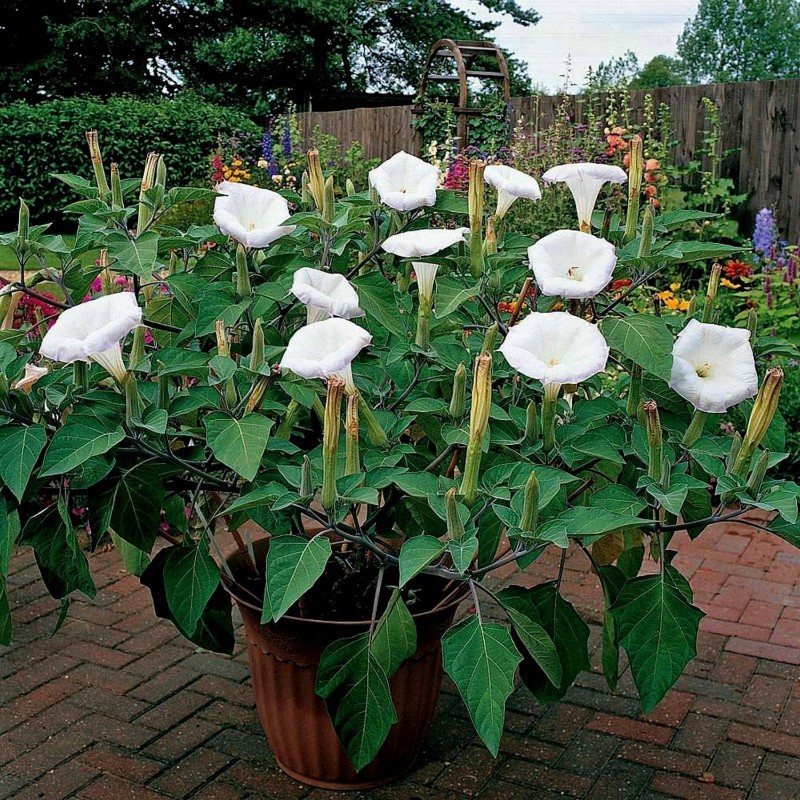 Datura stramonium, known by the common names Jimson weed or Devil's snare, is a plant in the nightshade family. It is believed to have originated in Mexico, but has now become naturalized in many

Datura stramonium, known by the common names Jimson weed or Devil's snare, is a plant in the nightshade family. It is believed to have originated in Mexico, but has now become naturalized in many other regions. Other common names for D. stramonium include thornapple and moon flower,[6] and it has the Spanish name Toloache. Other names for the plant include hell's bells, devil’s trumpet, devil’s weed, tolguacha, Jamestown weed, stinkweed, locoweed, pricklyburr, and devil’s cucumber.

Datura has been used in traditional medicine to relieve asthma symptoms and as an analgesic during surgery or bonesetting. It is also a powerful hallucinogen and deliriant, which is used spiritually for the intense visions it produces. However, the tropane alkaloids responsible for both the medicinal and hallucinogenic properties are fatally toxic in only slightly higher amounts than the medicinal dosage, and careless use often results in hospitalizations and deaths.

Datura stramonium is a foul-smelling, erect, annual, freely branching herb that forms a bush up to 60 to 150 cm (2 to 5 ft) tall.

The root is long, thick, fibrous and white. The stem is stout, erect, leafy, smooth, and pale yellow-green. The stem forks off repeatedly into branches, and each fork forms a leaf and a single, erect flower.

The leaves are about 8 to 20 cm (3–8 in) long, smooth, toothed,[10] soft, and irregularly undulated.[11] The upper surface of the leaves is a darker green, and the bottom is a light green.[10] The leaves have a bitter and nauseating taste, which is imparted to extracts of the herb, and remains even after the leaves have been dried.

Datura stramonium generally flowers throughout the summer. The fragrant flowers are trumpet-shaped, white to creamy or violet, and 6 to 9 cm (2 1⁄2–3 1⁄2 in) long, and grow on short stems from either the axils of the leaves or the places where the branches fork. The calyx is long and tubular, swollen at the bottom, and sharply angled, surmounted by five sharp teeth. The corolla, which is folded and only partially open, is white, funnel-shaped, and has prominent ribs. The flowers open at night, emitting a pleasant fragrance, and are fed upon by nocturnal moths.

The egg-shaped seed capsule is 3 to 8 cm (1–3 in) in diameter and either covered with spines or bald. At maturity, it splits into four chambers, each with dozens of small, black seeds.

Datura stramonium is native to North America, but was spread to the Old World early. It was scientifically described and named by Swedish botanist Carl Linnaeus in 1753, although it had been described a century earlier by herbalists, such as Nicholas Culpeper.[13] Today, it grows wild in all the world's warm and moderate regions, where it is found along roadsides and at dung-rich livestock enclosures. In Europe, it is found as a weed on wastelands and in garbage dumps.

The seed is thought to be carried by birds and spread in their droppings. Its seeds can lie dormant underground for years and germinate when the soil is disturbed. People who discover it growing in their gardens, and are worried about its toxicity, have been advised to dig it up or have it otherwise removed.

All parts of Datura plants contain dangerous levels of the tropane alkaloids atropine, hyoscyamine, and scopolamine, which are classified as deliriants, or anticholinergics. The risk of fatal overdose is high among uninformed users, and many hospitalizations occur amongst recreational users who ingest the plant for its psychoactive effects.

The amount of toxins varies widely from plant to plant. As much as a 5:1 variation can be found between plants, and a given plant's toxicity depends on its age, where it is growing, and the local weather conditions.[14] Additionally, within a given datura plant, toxin concentration varies by part and even from leaf to leaf. When the plant is younger, the ratio of scopolamine to atropine is about 3:1; after flowering, this ratio is reversed, with the amount of scopolamine continuing to decrease as the plant gets older.[19] In traditional cultures, a great deal of experience with and detailed knowledge of Datura was critical to minimize harm.[14] An individual datura seed contains about 0.1 mg of atropine, and the approximate fatal dose for adult humans is >10 mg atropine or >2–4 mg scopolamine.

Datura intoxication typically produces delirium (as contrasted to hallucination), hyperthermia, tachycardia, bizarre behavior, and severe mydriasis with resultant painful photophobia that can last several days. Pronounced amnesia is another commonly reported effect.[21] The onset of symptoms generally occurs around 30 to 60 minutes after ingesting the herb. These symptoms generally last from 24 to 48 hours, but have been reported in some cases to last as long as two weeks.[22]

As with other cases of anticholinergic poisoning, intravenous physostigmine can be administered in severe cases as an antidote.

USE IN TRADITIONAL MEDICINE

In traditional Ayurvedic medicine in India, datura has long been used for asthma symptoms. The active agent is atropine. The leaves are generally smoked either in a cigarette or a pipe. During the late 18th century, James Anderson, the English Physician General of the East India Company, learned of the practice and popularized it in Europe.

John Gerard's Herball (1597) states that "the juice of Thornapple, boiled with hog's grease, cureth all inflammations whatsoever, all manner of burnings and scaldings, as well of fire, water, boiling lead, gunpowder, as that which comes by lightning and that in very short time, as myself have found in daily practice, to my great credit and profit."

The Zuni once used datura as an analgesic, to render patients unconscious while broken bones were set.[27] The Chinese also used it in this manner, as a form of anaesthesia during surgery.

The ancient inhabitants of what is today central and southern California used to ingest the small black seeds of datura to "commune with deities through visions".[29] Across the Americas, other indigenous peoples such as the Algonquin, Navajo, Cherokee, Marie Galente, and Luiseño also used this plant in sacred ceremonies for its hallucinogenic properties.[30][31][32] In Ethiopia, some students and debtrawoch (lay priests), use D. stramonium to "open the mind" to be more receptive to learning, and creative and imaginative thinking.

In his book, The Serpent and the Rainbow, Canadian ethnobotanist Wade Davis identified D. stramonium, called "zombi (sic) cucumber" in Haiti, as a central ingredient of the concoction vodou priests use to create zombies.

The common name "datura" has its roots in ancient India, where the plant is considered particularly sacred—believed to be a favorite of the Hindu god Shiva Nataraja.

Datura prefers rich, calcareous soil. Adding nitrogen fertilizer to the soil will increase the concentration of alkaloids present in the plant. Datura can be grown from seed, which is sown with several feet between plants. Datura is sensitive to frost, so should be sheltered during cold weather. The plant is harvested when the fruits are ripe, but still green. To harvest, the entire plant is cut down, the leaves are stripped from the plant, and everything is left to dry. When the fruits begin to burst open, the seeds are harvested. For intensive plantations, leaf yields of 1,100 to 1,700 kilograms per hectare (1,000 to 1,500 lb/acre) and seed yields of 780 kg/ha (700 lb/acre) are possible.

In the United States, the plant is called jimson weed, or more rarely Jamestown weed; it got this name from the town of Jamestown, Virginia, where British soldiers consumed it while attempting to suppress Bacon's Rebellion. They spent 11 days in altered mental states:

The James-Town Weed (which resembles the Thorny Apple of Peru, and I take to be the plant so call'd) is supposed to be one of the greatest coolers in the world. This being an early plant, was gather'd very young for a boil'd salad, by some of the soldiers sent thither to quell the rebellion of Bacon (1676); and some of them ate plentifully of it, the effect of which was a very pleasant comedy, for they turned natural fools upon it for several days: one would blow up a feather in the air; another would dart straws at it with much fury; and another, stark naked, was sitting up in a corner like a monkey, grinning and making mows [grimaces] at them; a fourth would fondly kiss and paw his companions, and sneer in their faces with a countenance more antic than any in a Dutch droll.

In this frantic condition they were confined, lest they should, in their folly, destroy themselves — though it was observed that all their actions were full of innocence and good nature. Indeed, they were not very cleanly; for they would have wallowed in their own excrements, if they had not been prevented. A thousand such simple tricks they played, and after eleven days returned themselves again, not remembering anything that had passed.

– The History and Present State of Virginia, 1705