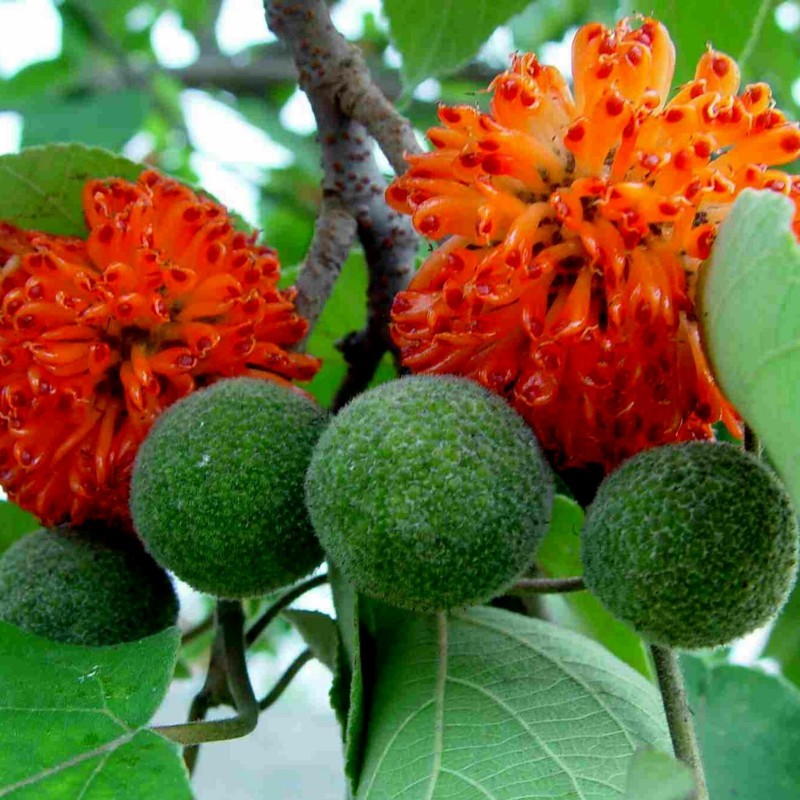 The paper mulberry (Broussonetia papyrifera, syn. Morus papyrifera L.) is a species of flowering plant in the family Moraceae. It is native to Asia, where its range includes China, Japan, Korea, Laos, Cambodia, Thailand, Burma, and India. It is widely cultivated elsewhere and it grows as an introduced species in parts of Europe, the United States, and Africa. Other common names include tapa cloth tree.

This species is a deciduous shrub or tree usually growing 10 to 20 meters tall, but known to reach 35 meters at times. The leaves are variable in shape, even on one individual. The blades may be lobed or unlobed, but they usually have toothed edges, lightly hairy, pale undersides, and a rough texture. They are up to about 15 to 20 centimeters long. The species is dioecious, with male and female flowers on separate plants. The staminate inflorescence is a catkin up to 8 centimeters long with fuzzy male flowers. The pistillate inflorescence is a spherical head up to about 2 centimeters wide with greenish female flowers trailing long styles. The infructescence is a spherical cluster 2 to 3 centimeters wide containing many red or orange fruits. Each individual protruding fruit in the cluster is a drupe.

Tapa cloth is a textile made from the inner bark in many Pacific Island nations. It was the main material for clothing in places such as Fiji, Tonga, Samoa and Tahiti until recent times, and it is still worn ceremonially. It is also used to make bags and bedding.