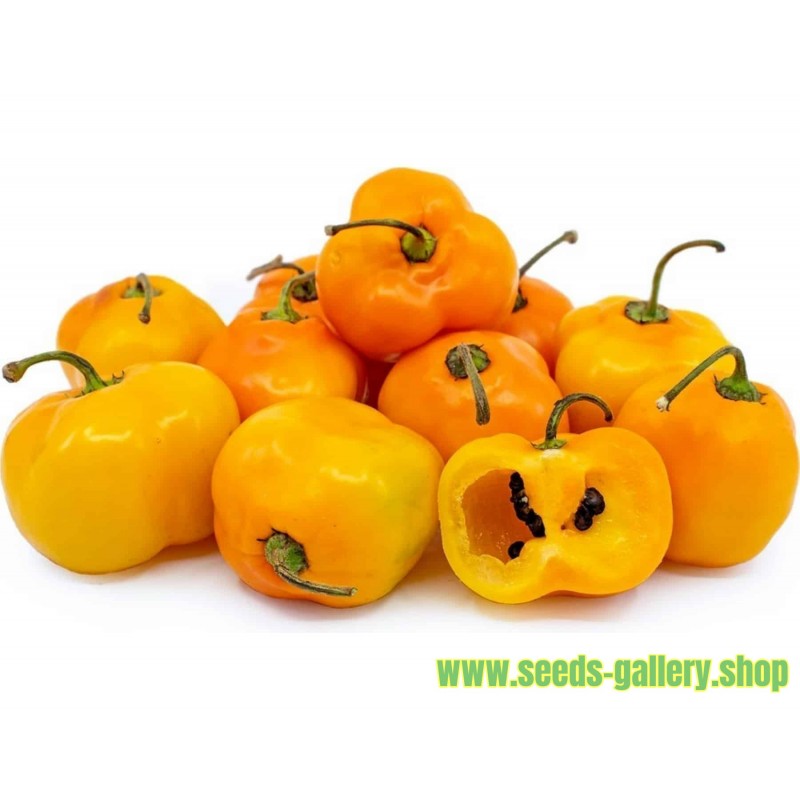 These plants produce HUGE chilies the size of racquetballs! The heat is similar to a habanero but these have MUCH BETTER FLAVOR (almost like a spicy butternut squash). Their thick flesh makes an amazing stuffed or grilled pepper! The plants leaves grow "hairy" and they produce beautiful purple leaves.

These plants produce HUGE chilies the size of racquetballs! The heat is similar to a habanero but these have MUCH BETTER FLAVOR (almost like a spicy butternut squash). Their thick flesh makes an amazing stuffed or grilled pepper! The plants leaves grow "hairy" and they produce beautiful purple leaves.
Capsicum pubescens is a species of the genus Capsicum (pepper), known as rocoto (Quechua: ruqutu) and locoto (Aymara: luqutu), which is found primarily in Central and South America. It is known only in cultivation. The species name, pubescens, means hairy, which refers to the hairy leaves of this pepper. The hairiness of the leaves, along with the black seeds, distinguish this species from others.[4] As they reach a relatively advanced age and the roots lignify quickly, sometimes they are called tree chili. Of all the domesticated species of peppers, this is the least widespread and systematically furthest away from all others. It is reproductively isolated from other species of the genus Capsicum.[3] A very notable feature of this species is its ability to withstand cooler temperatures than other cultivated pepper plants,[5] but cannot withstand frost.
Vegetative characteristics
Like all other species of the genus Capsicum, plants of the species Capsicum pubescens grow as a shrub, but sometimes as climbing plants. They grow into four-meter woody plants relatively quickly, and live up to 15 years, which gives them, especially with age, an almost tree-like appearance.[6] After a first impulse is formed, the plant branches at a height of about 30 cm for the first time, and forms during growth by further dividing into a bushy appearance. More shoots develop from the leaf axils. Some varieties have purple discoloration on the branches, as can be observed in other Capsicum species. The leaves have a 5–12 mm long petiole and a leaf blade ovate to 5–12 cm long, 2.5 to 4 cm wide, tapering at the top and the base is wedge-shaped.
In addition to the relatively long life, Capsicum pubescens differs in many other characteristics from related species.
Flowers
The flowers appear singly or in pairs (rarely up to four) on the shoots, and the branches are at about 1 cm long flower stems, which extend on the fruit to around 4–5 cm. The calyx has five triangular pointed teeth, which have in the fruit a length of about 1 mm. A characteristic different from other cultivated species of the genus Capsicum is the blue-violet-colored petals, brighter in the centre. The anthers are partly purple, partly white.
Distribution
Capsicum pubescens is found in cultivation primarily in north-western South America, as well as southern Central America.[citation needed] It is believed to have evolved from other, more primitive Capsicum species also occurring in the same area.[citation needed] C. pubescens grows at higher elevations than other species, and cannot survive the tropical heat in the lowlands.
There are several cultivars of C. pubescens; most are rarely cultivated, and are now relatively scarce.
Cultivars include 'Canario' (yellow), 'Manzano' (red), 'Peron' (pear-shaped), and 'Rocoto Longo' (which was developed in the Canary Islands).
30.000 - 50.000 SHU

Be the first to write your review !
 
Obsah není k dispozici