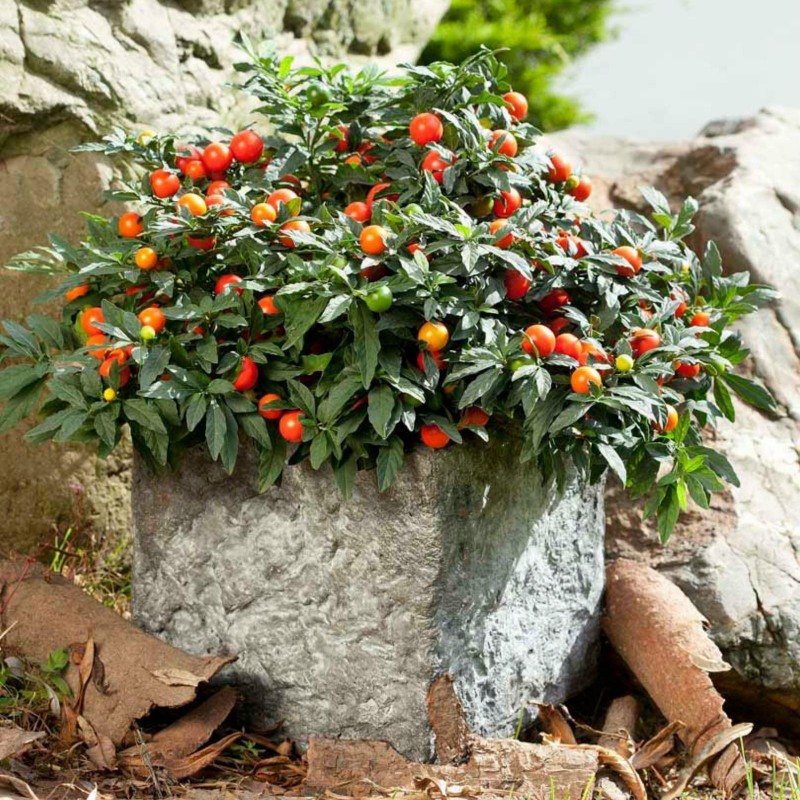 Solanum pseudocapsicum is a nightshade species with poisonous fruit. It is commonly known as the Jerusalem Cherry, Madeira Winter Cherry, or, ambiguously, "winter cherry". These perennials can be

Solanum pseudocapsicum is a nightshade species with poisonous fruit. It is commonly known as the Jerusalem Cherry, Madeira Winter Cherry, or, ambiguously, "winter cherry". These perennials can be grown decoratively as house plants, but in some areas of Australia and New Zealand the plant has become a weed.

The plant is perennial in zones up to USDA 8. Native to Peru and Ecuador, they can survive frosts and cold weather. They generally live up to 10 years, producing fruit usually in their second or third year, and every year after that. They are congeners of tomatoes and the fruit is extremely similar to cherry tomatoes in taste and texture, and are therefore easily confused with them.

The Jerusalem Cherry's poison is primarily solanocapsine, which is similar to other alkaloids found in their genus, such as solanine and atropine. Although the toxin is poisonous, it is generally not life-threatening. It may cause gastric problems, including vomiting and gastroenteritis as referenced in the obsolete scientific name S. ipecacuanha (roughly "ipecac nightshade").

Jerusalem cherries are also highly poisonous to dogs,[2] cats,[3] and some birds. Though Jerusalem Cherry is distributed by certain birds in the wild – both where native and where introduced, e.g. in Australia by the Pied Currawong (Strepera graculina) –, most popular pet birds, namely parrots and relatives, are not immune to its poison.

Supposedly, the plant described as Solanum capsicastrum and called False Jerusalem Cherry is closely related but distinct species, and the trade name "Winter Cherry" is also held to apply to this exclusively. It is said to be recognizable by more mediocre size, and/or a greyish hue to the foliage and/or stems, and/or fruit that have a pronounced yellow hue when unripe and whose pulp is not or less poisonous (though the seeds still are, making the whole fruit still inedible), and/or higher frost hardiness. But these supposed differences are inconsistently given in various horticultural sources, and no botanical source has in recent times distinguished between the two. Indeed, these taxa are now generally held to refer to the same species, and the "False Jerusalem Cherry", if it is at all distinguishable, seems to be a chemotype at best, or just a motley collection of cultivars.