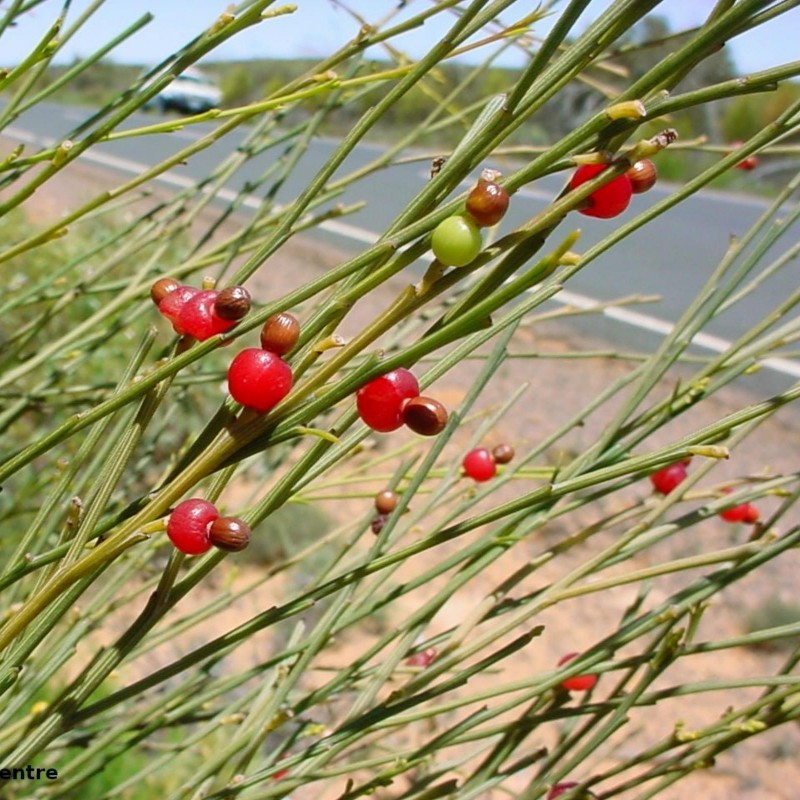 Exocarpos sparteus is an Australian endemic plant species, commonly known as the Broom Ballart or native cherry. The species is found in all states of mainland Australia. A shrub, four meters tall, erect, with drooping branchlets, almost

Exocarpos sparteus is an Australian endemic plant species, commonly known as the Broom Ballart or native cherry. The species is found in all states of mainland Australia.
A shrub, four metres tall, erect, with drooping branchlets, almost leafless. The species bears flowering branchlets, which may have small, greenish-yellow, and stalkless leaves. The flowers are just 1 mm across and of a similar colour, occasionally white. The fruit of this species is egg-shaped, pink or red, and between 4 and 5 mm long.
The habit of this plant is upright, becoming slightly curved, combining with the many regular branches to form a rounded aspect. The smooth and spherical appearance of the species is given by the droop of the branchlets, the similar colour and size of the leaves and flowers, and upcurving of the outward branches.
The specific name is derived from the Latin word esparto, referring to a kind of Spanish grass that was used for its fibre. It was first described by Robert Brown, in 1810, having collected the plants on his visit to King George Sound in 1802. One of the species' common names, Native Cherry, is given to another cogenor with an edible fruit, Exocarpos cupressiformis; both of these species are known as sorts of Ballart.
A shrub, four metres tall, erect, with drooping branches.
The fruit is egg-shaped, pink or red.
The tree look similar to a small cypress tree, but it has sweet, juicy fruits which are eaten fresh.
The sap was used by the Aboriginals  as a treatment for snake bites.
V 61
183 ks

Běžná cena 1,65 € -13% Cena 1,44 € (SKU: VT 51)
Offer ends in:
Seeds Gallery Shop,
5/ 5
<h2><strong>GOLD NUGGET Tomato Yellow Cherry Seeds</strong></h2> <h2><span style="color:#ff0000;"><strong>Price for Package of 10 or 20 seeds.</strong></span></h2> <p>A fantastic golden yellow cherry tomato producing heavy yields of 1" sweet and flavourful early fruits. Plants are compact at 24-30 in. Determinate.</p> <p>Sow in spring 1/16 inch deep. Germination takes around 6-14 days at 65-75F.</p> <p>Transplant the seedlings when large enough to handle into 3 inch pots. Grow on under cooler conditions and when about 8 inches tall, either plant in their growing position in the greenhouse or gradually acclimatise them to outdoor conditions and plant out 18 inches apart in a warm and sunny spot in moist, fertile well drained soil and keep watered.</p> <p>What's the difference between "indeterminate" and "determinate" tomatoes?</p> <p>Determinate tomatoes, or "bush" tomatoes, are varieties that grow to a compact height (generally 3 - 4'). Determinates stop growing when fruit sets on the top bud. All the tomatoes from the plant ripen at approximately the same time (usually over period of 1- 2 weeks). They require a limited amount of staking for support and are perfectly suited for container planting.</p> <p>Indeterminate tomatoes will grow and produce fruit until killed by frost. They can reach heights of up to 12 feet although 6 feet is normal. Indeterminates will bloom, set new fruit and ripen fruit all at the same time throughout the season. They require substantial staking for support and benefit from being constrained to a central growing stem.</p>
VT 51 (10 S)