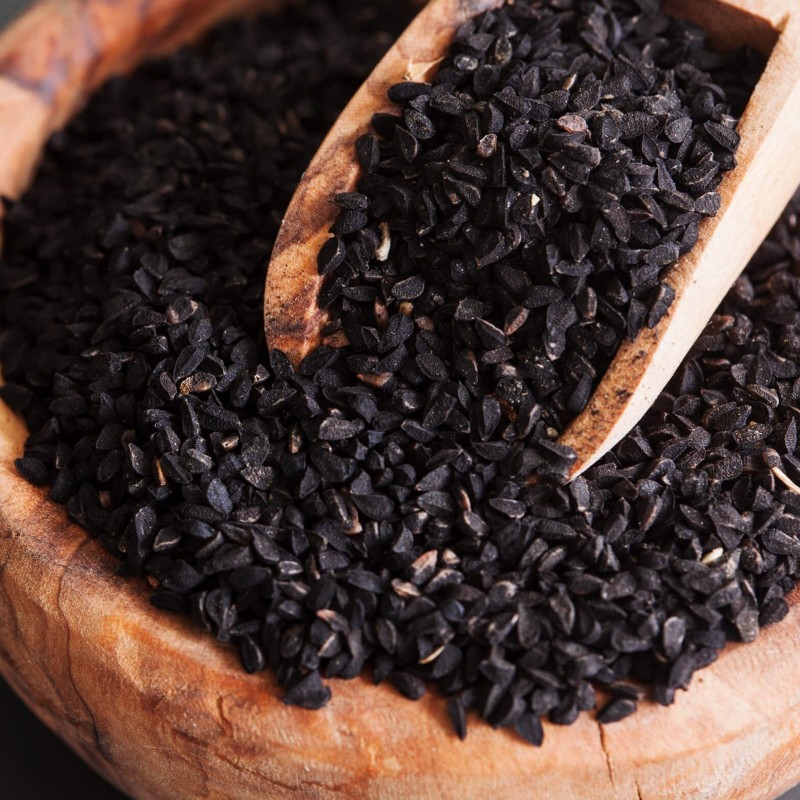 Black cumin unground - cures many diseases
The price is for packaging of 5 grams of this spice.

Black cumin unground - cures many diseases
The price is for packaging of 5 grams of this spice.

Nigella sativa (black caraway, also known as black cumin, nigella, and kalonji) is an annual flowering plant in the family Ranunculaceae, native to south and southwest Asia. N. sativa grows to 20–30 cm (7.9–11.8 in) tall, with finely divided, linear (but not thread-like) leaves. The flowers are delicate, and usually colored pale blue and white, with five to ten petals. The fruit is a large and inflated capsule composed of three to seven united follicles, each containing numerous seeds which are used as spice, sometimes as a replacement for black cumin (Bunium bulbocastanum).

The genus name Nigella is a diminutive of the Latin niger (black), referring to the seeds. In English, N. sativa and its seed are variously called black caraway, black seed, black cumin, fennel flower, nigella, nutmeg flower, Roman coriander, and kalonji (from Hindi-Urdu). Blackseed and black caraway may also refer to Bunium persicum.

The seeds of N. sativa are used as a spice in Indian and Middle Eastern cuisines. The black seeds taste like a combination of onions, black pepper, and oregano. They have a pungent, bitter taste and smell.

The dry-roasted seeds flavor curries, vegetables, and pulses. They can be used as a "pepper" in recipes with pod fruit, vegetables, salads, and poultry. In some cultures, the black seeds are used to flavor bread products, and are used as part of the spice mixture panch phoron (meaning a mixture of five spices) and alone in many recipes in Bengali cuisine and most recognizably in naan. Nigella is also used in Armenian string cheese, a braided string cheese called majdouleh or majdouli in the Middle East.