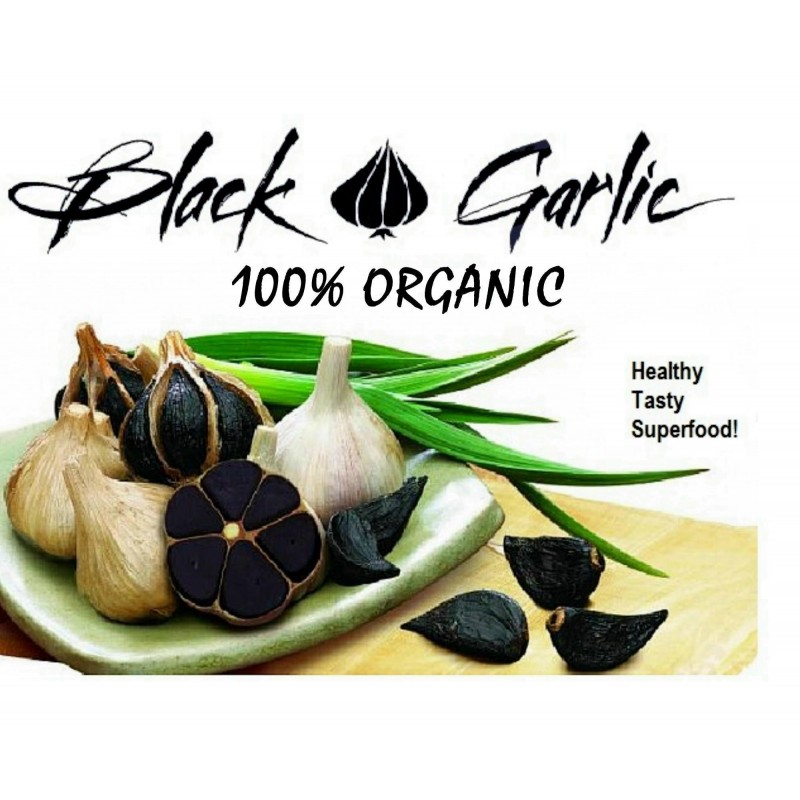 Price for Package of 5 Cloves.

Price for Package of 5 Cloves.

Black garlic is a type of "caramelized" garlic (in reality, browned by the Maillard reaction rather than truly caramelized) first used as a food ingredient in Asian cuisine. It is made by heating whole bulbs of garlic (Allium sativum) over the course of several weeks, a process that results in black cloves. The taste is sweet and syrupy with hints of balsamic vinegar[1] or tamarind.[2] Black garlic's popularity has spread to the United States as it has become a sought-after ingredient used in high-end cuisine.

The process of producing black garlic is sometimes incorrectly referred to as fermentation, but it does not in fact involve microbial action.[3] Black garlic is made when heads of garlic are aged under specialized conditions of heat and humidity. Bulbs are kept in a humidity-controlled environment at temperatures that range from 60 - 77ºC (140 to 170 degrees Fahrenheit) for 60 to 90 days. There are no additives, preservatives, or burning of any kind. The enzymes that give fresh garlic its sharpness break down. Those conditions also facilitate the Maillard reaction, the chemical process that produces new flavour compounds responsible for the deep taste of seared meat and fried onions, the cloves turn black and develop a sticky date-like texture.

Black garlic is prized as a food rich in antioxidants and added to energy drinks, and in Thailand is claimed to increase the consumer's longevity. It is also used to make black garlic chocolate.

In black garlic, the garlic flavour is softened such that it almost or entirely disappears depending on the length of time it was heated. Additionally, its flavour is dependent on that of the fresh garlic that was used to make it. Garlic with a higher sugar content produces a milder, more caramel-like flavour, whereas garlic with a low sugar content produces a sharper, somewhat more acidic flavour, similar in character to tomato paste. Burnt flavours may also be present if the garlic was heated for too long at too high a temperature or not long enough: during heating, the garlic turns black in colour well before the full extent of its sweetness is able to develop.

Black garlic can be eaten alone, on bread, or used in soups, sauces, crushed into a mayonnaise or simply tossed into a vegetable dish. A vinaigrette can be made with black garlic, sherry vinegar, soy, a neutral oil, and Dijon mustard. Its softness increases with water content.

Unlike the vegetable from which it is made, white garlic, black garlic has a very subtle and muted flavour that is easily overpowered.

One method to release the subtle flavours of black garlic is to knead a peeled clove between the fingers until its structure is thoroughly broken down and then to dissolve the resulting paste in a small amount of hot water. This produces a dark brown, coffee-coloured suspension of the fibrous black garlic particles in a solution that carries most of its flavour, acidity, and sugar content. This liquid may then be added to foods that are otherwise neutral in flavour (like, for example, mashed potatoes) to better showcase the flavour of the black garlic.

Likely owing to its harsh and concentrated colour, the potent reputation of fresh garlic, and the association of Maillard reactions with the browning of meat, it is a common misconception that black garlic has a "meaty" flavour. It does not. It is commonly eaten out of hand by enthusiasts, who sometimes liken the flavour to a savoury, slightly acidic caramel candy or to sweet tamarind fruit. The most prominent flavour it imparts is sweetness when used in high concentrations and when used in low concentrations, provided that there are no other flavours to compete with that of the black garlic, the flavour and aroma are somewhat similar to those of instant coffee, though without any bitterness.

It garnered television attention when it was used in battle redfish on Iron Chef America, episode 11 of season 7 (on Food Network), and in an episode of Top Chef New York (on Bravo),[8] where it was added to a sauce accompanying monkfish.

In the United Kingdom,[6] where it made its TV debut on the BBC's Something for the Weekend cooking and lifestyle program in February 2009,[10] farmer Mark Botwright, owner of the South West Garlic Farm, explained that he developed a process for preserving garlic after finding a 4000-year-old Korean recipe for "black garlic."

In 2011, it was used on an episode of Food Network's Chopped Champions. In September 2011, it was a mandatory ingredient in the final round of the second episode of Ron Ben-Israel's Sweet Genius.

It also was mentioned in the animated series Bob's Burgers in episode "Best Burger", in which Bob enters a best burger contest, but quickly realizes his main ingredient - black garlic - is missing and sends his kids back to the restaurant to retrieve it in time for its preparation and inclusion in the burger.

AFTER YOU BUY THIS PRODUCT WE WILL SEND YOU LINK WITH VIDEO HOW YOU CAN MAKE BLACK GARLIC EASY AT HOME FOR ONLY 10 DAYS!