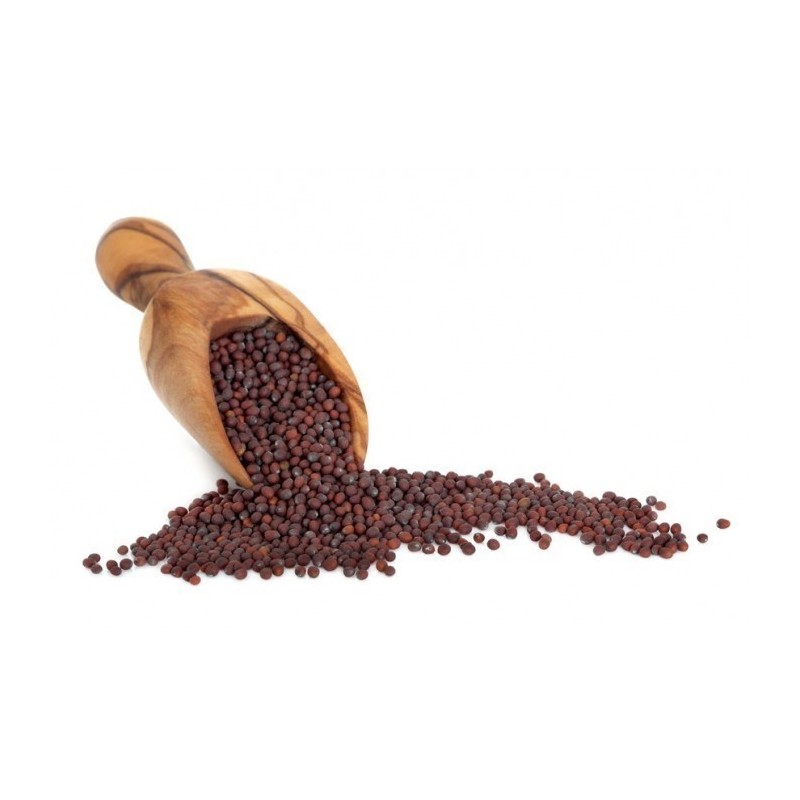 Black/brown mustard spices - unground
The price is for packaging of 10 grams of this spice.

Black/brown mustard spices - unground
The price is for packaging of 10 grams of this spice.

Brassica juncea, commonly brown mustard, Chinese mustard, Indian mustard, leaf mustard, Oriental mustard and vegetable mustard, is a species of mustard plant.One subvariety is southern giant curled mustard, which resembles a headless cabbage such as kale, but with a distinct horseradish or mustard flavor. It is also known as green mustard cabbage.

The leaves, seeds, and stems of this mustard variety are edible. The plant appears in some form in African, Bangladeshi, Chinese, Italian, Indian, Japanese, Nepali, Pakistani, Korean, and African-American (soul food) cuisines. Cultivars of B. juncea are grown for their greens, and for the production of oilseed. The mustard condiment made from the seeds of the B. juncea is called brown mustard and is considered to be spicier than yellow mustard.

Because it may contain erucic acid, a potential toxin, mustard oil is restricted from import as a vegetable oil into the United States. Essential oil of mustard, however, is accepted as GRAS (Generally Recognized as Safe). But in Russia, this is the main species grown for the production of mustard oil. It is widely used in canning, baking and margarine production in Russia, and the majority of Russian table mustard is also made from B. juncea.

The leaves are used in African cooking, and all plant parts are used in Nepali cuisine, particularly in the mountain regions of Nepal, as well as in the Punjab cuisine of India and Pakistan, where a dish called sarson da saag (mustard greens) is prepared. B. juncea subsp. tatsai, which has a particularly thick stem, is used to make the Nepali pickle called achar, and the Chinese pickle zha cai.

The Gorkhas of Darjeeling, Sikkim and Nepal prepare pork with mustard greens (also called rayo in Nepali). It is usually eaten with relish and steamed rice, but can also be eaten with roti (griddle breads). In Nepal it is also a common practice to cook these greens with meat of all sorts specially goat meat; which is normally prepared in a pressure cooker with minimal use of spices to focus on the flavour of the greens and dry chillies. Brassica juncea (especially the seeds) is more pungent than greens from the closely related Brassica oleracea (kale, broccoli, and collard greens),[8] and is frequently mixed with these milder greens in a dish of "mixed greens".

Chinese and Japanese cuisines also make use of mustard greens. In Japanese cuisine, it is known as takana and often pickled for use as filling in onigiri or as a condiment. Many varieties of B. juncea cultivars are used, including zha cai, mizuna, takana (var. integrifolia), juk gai choy, and xuelihong. Asian mustard greens are most often stir-friedor pickled. A Southeast Asian dish called asam gai choy or kiam chai boey is often made with leftovers from a large meal. It involves stewing mustard greens with tamarind, dried chillies and leftover meat on the bone. Brassica juncea is also known as gai choi, siu gai choi, xaio jie cai, baby mustard, Chinese leaf mustard or mostaza.