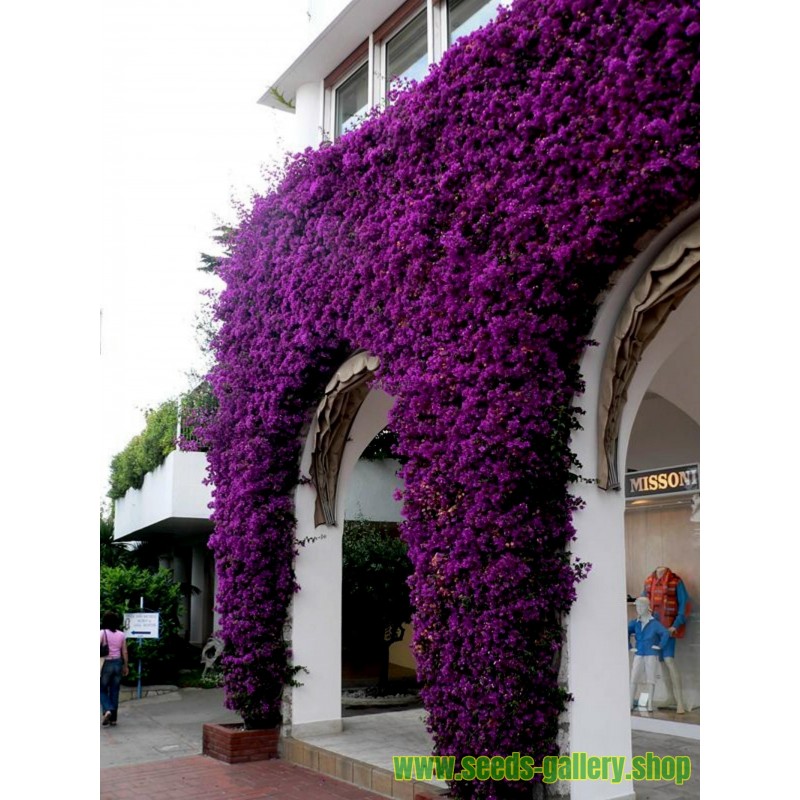 Planting bougainvillea seeds is sure way to add a vibrant splash of color to the home or garden. These tropical favorites are relatively easy to maintain. They can thrive for many years, becoming even more

Planting bougainvillea seeds is sure way to add a vibrant splash of color to the home or garden. These tropical favorites are relatively easy to maintain. They can thrive for many years, becoming even more beautiful with age.

Bougainvillea plants can be grown in the garden where they can be trained to climb 10-20 feet to cover porches, archways or walls or they can be grown as a colorful, spreading ground cover.

Bougainvilleas are also well adapted to growing in containers and can be grown as house plants.

Bougainvilleas have strong, woody thorns.The older the plant gets, the longer and bigger the thorns will be.

Growing Bougainvillea Plants in the Garden

Bougainvillea plants do not transplant well, so select a sheltered planting site in full sun where they can grow undisturbed. They aren't overly fussy about the soil as long as it is well drained. However, the addition of compost, processed manure or peat moss to the planting hole will get your Bougainvillea off to a good start.

Bougainvilleas are very drought tolerant once established and should only be watered when the soil is dry an inch below the surface, except when growing in containers which should be kept slightly moist.

Feed your Bougainvillea monthly beginning in early spring using a low-nitrogen, bloom type fertilizer, following label directions carefully. Do not fertilize in the fall or winter.Prune freely after blooming. Flowers appear on the new growth.

Bougainvilleas can be grown as house plants but they will not bloom well indoors unless you can provide a minimum of five hours of bright sun each day and adequate humidity.

They should be grown in a rich, well-drained commercial planting mix that is NOT pre-fertilized. Repotting should be done in late winter or early in the spring.

Keep the soil evenly moist during the growing season, but allow it to gradually dry out by winter.Feed actively growing plants every two weeks with a soluble house plant type fertilizer, following label directions carefully.

Grow your Bougainvillea on a strong trellis or prune it in the spring to maintain a shrubby growth habit. Container grown Bougainvilleas can be moved to a sunny spot in the garden for the summer, but should be allowed to gradually dry out before bringing them back indoors by mid autumn.

Inspect your plants carefully for spider mites, mealybugs and scale before returning them to the house.Propagating Bougainvillea Plants and Growing them from Seed

Bougainvillea seeds can be sown indoors at any time of the year. Maintain a temperature of 70°-75° within the growing medium until germination, which typically takes 30 days or longer.

The requirements for bougainvillea seed growth are quite similar to those of the mature plant. Bougainvilleas demand well draining soil. Any quality potting soil will suffice as a growing medium as long as it drains well and is slightly acidic. Select a container that does not narrow at the top. The roots of bougainvilleas and delicate, when the time comes for transplanting, the bougainvillea needs to be able to slide easily out of the old container. The pot does not need to be deep, but should hold enough of the growing medium to make frequent watering unnecessary. The seeds will need a good light source.

The vine species grow anywhere from 1 to 12 m (3 to 40 ft.) tall, scrambling over other plants with their spiky thorns. The thorns are tipped with a black, waxy substance. They are evergreen where rainfall occurs all year, or deciduous if there is a dry season. The leaves are alternate, simple ovate-acuminate, 4–13 cm long and 2–6 cm broad. The actual flower of the plant is small and generally white, but each cluster of three flowers is surrounded by three or six bracts with the bright colours associated with the plant, including pink, magenta, purple, red, orange, white, or yellow. Bougainvillea glabra is sometimes referred to as "paper flower" because the bracts are thin and papery. The fruit is a narrow five-lobed achene.

Bougainvillea are relatively pest-free plants, but they may suffer from worms, snails and aphids. The larvae of some Lepidoptera species also use them as food plants, for example the giant leopard moth (Hypercompe scribonia).

The first European to describe these plants was Philibert Commerçon, a botanist accompanying French Navy admiral and explorer Louis Antoine de Bougainville during his voyage of circumnavigation of the Earth, and first published for him by Antoine Laurent de Jussieu in 1789.[2] It is possible that the first European to observe these plants was Jeanne Baré, Commerçon's lover and assistant who was an expert in botany. Because she was not allowed on ship as a woman, she disguised herself as a man in order to make the journey (and thus became the first woman to circumnavigate the globe).

Twenty years after Commerçon's discovery, it was first published as 'Buginvillæa' in Genera Plantarum by A.L. de Jussieu in 1789.[4] The genus was subsequently spelled in several ways until it was finally corrected to 'Bougainvillea' in the Index Kewensis in the 1930s. Originally, B. spectabilis and B. glabra were hardly differentiated until the mid-1980s when botanists recognized them to be totally distinct species. In the early 19th century, these two species were the first to be introduced into Europe, and soon, nurseries in France and England did a thriving trade providing specimens to Australia and other faraway countries. Meanwhile, Kew Gardens distributed plants it had propagated to British colonies throughout the world. Soon thereafter, an important event in the history of bougainvillea took place with the discovery of a crimson specimen in Cartagena, Colombia, by Mrs. R.V. Butt. Originally thought to be a distinct species, it was named B. buttiana in her honour. However, it was later discovered to be a natural hybrid of a variety of B. glabra and possibly B. peruviana - a "local pink bougainvillea" from Peru. Natural hybrids were soon found to be common occurrences all over the world. For instance, around the 1930s, when the three species were grown together, many hybrid crosses were created almost spontaneously in East Africa, India, the Canary Islands, Australia, North America, and the Philippines.

Bougainvilleas are popular ornamental plants in most areas with warm climates. Locarno in Switzerland, with its mild Mediterranean climate, is famous for its bougainvilleas.[citation needed]

Although it is frost-sensitive and hardy in U.S. Hardiness Zones 9b and 10, bougainvillea can be used as a houseplant or hanging basket in cooler climates. In the landscape, it makes an excellent hot season plant, and its drought tolerance makes it ideal for warm climates year-round. Its high salt tolerance makes it a natural choice for color in coastal regions. It can be pruned into a standard, but is also grown along fence lines, on walls, in containers and hanging baskets, and as a hedge or an accent plant. Its long arching thorny branches bear heart-shaped leaves and masses of papery bracts in white, pink, orange, purple, and burgundy. Many cultivars, including double-flowered and variegated, are available.

Many of today's bougainvillea are the result of interbreeding among only three out of the eighteen South American species recognized by botanists. Currently, there are over 300 varieties of bougainvillea around the world. Because many of the hybrids have been crossed over several generations, it is difficult to identify their respective origins. Natural mutations seem to occur spontaneously throughout the world; wherever large numbers of plants are being produced, bud-sports will occur. This had led to multiple names for the same cultivar (or variety) and has added to the confusion over the names of bougainvillea cultivars.

The growth rate of bougainvilleas varies from slow to rapid, depending on the variety. They tend to flower all year round in equatorial regions. Elsewhere, they are seasonal, with bloom cycles typically four to six weeks. Bougainvilleas grow best in dry soil, in very bright full sun and with frequent fertilization; but they require little water once established, and in fact will not flourish if over-watered. They can be easily propagated via tip cuttings.

The bougainvillea is also a very attractive species for Bonsai enthusiasts, due to their ease of training and their radiant flowering during the spring.[6] They can be kept as indoor houseplants in temperate regions and kept small by bonsai techniques.

Various species of Bougainvillea are the official flowers of Guam (where it is known as the Puti Tai Nobiu);[8] Lienchiang and Pingtung Counties in Taiwan; Ipoh, Malaysia;[9] the cities of Tagbilaran, Philippines; Camarillo, California; Laguna Niguel, California; San Clemente, California; the cities of Shenzhen, Huizhou, Zhuhai, and Jiangmen in Guangdong Province, China; and Naha, Okinawa.

Native to South America, Bougainvillea carries several names in the different regions where it is expontaneously present. Apart from Rioplatense Spanish santa-rita and Peruvian Spanish papelillo, it may be variously named primavera, três-marias, sempre-lustrosa, santa-rita, ceboleiro, roseiro, roseta, riso, pataguinha, pau-de-roseira and flor-de-papel in Brazilian Portuguese. Nevertheless, buganvílea [buɡɐ̃ˈviʎ̟ɐ] in Portuguese and buganvilia [buɣamˈbilja] in Spanish are the most common names accepted by people of the regions where these languages are spoken but it is an introduced plant.

The sap of the Bougainvillea can cause serious skin rashes, similar to toxicodendron species.