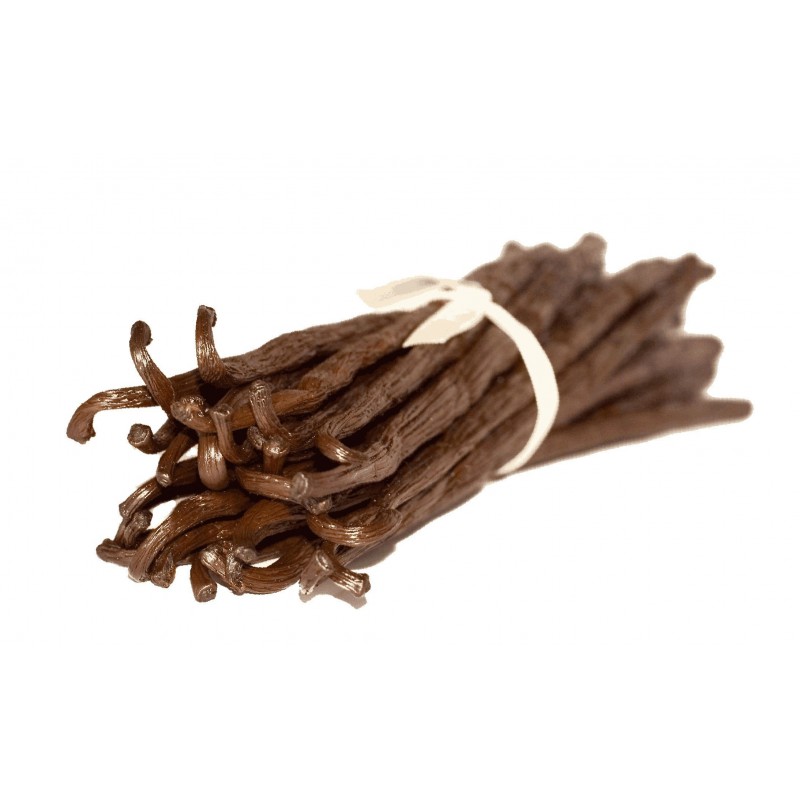 The price is for 2 sticks of 10cm of this spice.

Vanilla is a flavoring derived from orchids of the genus Vanilla, primarily from the Mexican species, flat-leaved vanilla (V. planifolia). The word vanilla, derived from vainilla, the diminutive of

The price is for 2 sticks of 10cm of this spice.

Vanilla is a flavoring derived from orchids of the genus Vanilla, primarily from the Mexican species, flat-leaved vanilla (V. planifolia). The word vanilla, derived from vainilla, the diminutive of the Spanish word vaina (vaina itself meaning a sheath or a pod), is translated simply as "little pod". Pre-ColumbianMesoamerican people cultivated the vine of the vanilla orchid, called tlilxochitl by the Aztecs. Spanish conquistador Hernán Cortés is credited with introducing both vanilla and chocolate to Europe in the 1520s.

The four main commercial preparations of natural vanilla are:

Vanilla flavoring in food may be achieved by adding vanilla extract or by cooking vanilla pods in the liquid preparation. A stronger aroma may be attained if the pods are split in two, exposing more of a pod's surface area to the liquid. In this case, the pods' seeds are mixed into the preparation. Natural vanilla gives a brown or yellow color to preparations, depending on the concentration. Good-quality vanilla has a strong, aromatic flavor, but food with small amounts of low-quality vanilla or artificial vanilla-like flavorings are far more common, since true vanilla is much more expensive.

Regarded as the world's most popular aroma and flavor, vanilla is a widely used aroma and flavor compound for foods, beverages and cosmetics, as indicated by its popularity as an ice cream flavor.Although vanilla is a prized flavoring agent on its own, it is also used to enhance the flavor of other substances, to which its own flavor is often complementary, such as chocolate, custard, caramel, coffee, and others. Vanilla is a common ingredient in Western sweet baked goods, such as cookies and cakes.

The food industry uses methyl and ethyl vanillin as less-expensive substitutes for real vanilla. Ethyl vanillin is more expensive, but has a stronger note. Cook's Illustrated ran several taste tests pitting vanilla against vanillin in baked goods and other applications, and to the consternation of the magazine editors, tasters could not differentiate the flavor of vanillin from vanilla; however, for the case of vanilla ice cream, natural vanilla won out. A more recent and thorough test by the same group produced a more interesting variety of results; namely, high-quality artificial vanilla flavoring is best for cookies, while high-quality real vanilla is slightly better for cakes and significantly better for unheated or lightly heated foods. The liquid extracted from vanilla pods was once believed to have medical properties, helping with various stomach ailments.