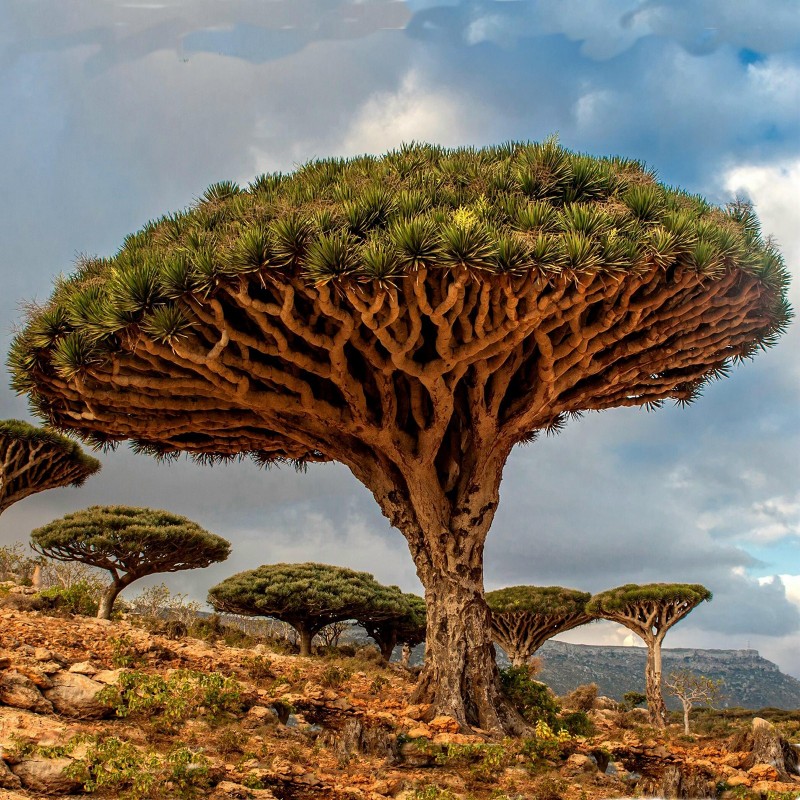 Dracaena draco, the Canary Islands dragon tree or drago, is a subtropical tree in the genus Dracaena, native to the Canary Islands, Cape Verde, Madeira, western Morocco, and introduced to the Azores. It is the natural symbol of the island of Tenerife, together with the blue chaffinch.

Dracaena draco is a monocot with a branching growth pattern currently placed in the asparagus family (Asparagaceae, subfamily Nolinoidae).[5] When young it has a single stem. At about 10–15 years of age, the stem stops growing and produces a first flower spike with white, lily-like perfumed flowers, followed by coral berries. Soon a crown of terminal buds appears and the plant starts branching. Each branch grows for about 10–15 years and re-branches, so a mature plant has an umbrella-like habit. It grows slowly, requiring about ten years to reach 1.2 meters (4 ft) in height but can grow much faster.

Being a monocotyledon, it does not display any annual or growth rings so the age of the tree can only be estimated by the number of branching points before reaching the canopy. The specimen called "El Drago Milenario" (the thousand-year-old dragon) growing at Icod de los Vinos in northwest Tenerife is the oldest living plant of this species. Its age was estimated in 1975 to be around 250 years, with a maximum of 365 years, not several thousand as had previously been claimed.[7] It is also the largest D. draco tree alive. Its massive trunk comes from the contribution of clusters of aerial roots that emerge from the bases of lowest branches and grow down to the soil. Descending along the trunk, they cling tightly to the trunk, integrate with it and contribute to its radial growth.[8] There is considerable genetic variation within the Canary Island dragon trees. The form found on Gran Canaria is now treated as a separate species, Dracaena tamaranae, based on differences in flower structure. The form endemic to La Palma initially branches very low with numerous, nearly vertical branches arranged fastigiately. There is a forest of such trees at Las Tricias, Garafia district, La Palma.[9][10]

When the bark or leaves are cut they secrete a reddish resin, one of several sources of substances known as dragon's blood. Red resins from this tree contain many mono- and dimeric flavans that contribute to the red color of the resins. Dragon's blood has a number of traditional medical uses, although dragon's blood obtained from Dracaena draco was not known until the 15th century, and analyses suggest that most dragon's blood used in art was obtained from species of the genus Daemonorops.[13] The primary and secondary plant bodies is the site of the secretory plant tissues that form the dragon's blood. These tissues include ground parenchyma cells and cortex cells.[14] Dragon's blood from Dracaena draco and Dracaena cinnabari can be distinguished by differences in 10 compounds and a dominant flavonoid DrC11 missing in Dracaena draco.[13]

The Guanches worshiped a specimen in Tenerife and hollowed its trunk into a small sanctuary. Humboldt saw it at the time of his visit. It was 70 feet (21 m) tall and 45 feet (14 m) in circumference, and was estimated to be 6000 years old. It was destroyed by a storm in 1868.[15]

Dracaena draco is cultivated and widely available as an ornamental tree for parks, gardens, and drought-tolerant water-conserving sustainable landscape projects. It has gained the Royal Horticultural Society's Award of Garden Merit.