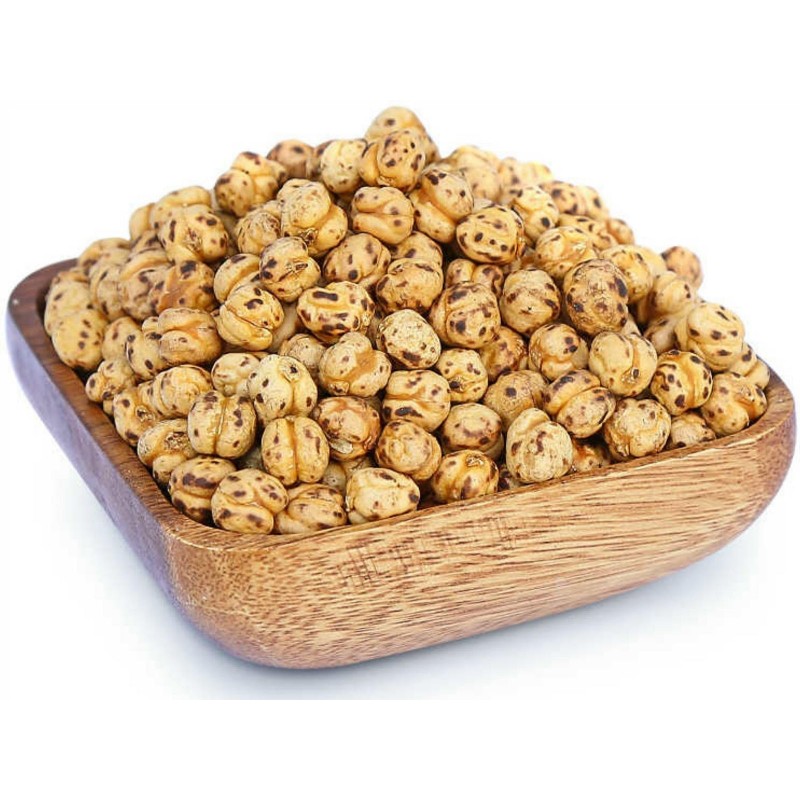 The chickpea (Cicer arietinum) is a legume of the family Fabaceae, subfamily Faboideae. Formerly known as the gram, it is also commonly known as garbanzo or garbanzo bean and sometimes known as ceci

The chickpea (Cicer arietinum) is a legume of the family Fabaceae, subfamily Faboideae. Formerly known as the gram,[1] it is also commonly known as garbanzo or garbanzo bean and sometimes known as ceci, cece, channa, or Bengal gram. Its seeds are high in protein. It is one of the earliest cultivated legumes: 7,500-year-old remains have been found in the Middle East.

The plant grows to between 20–50 cm (8–20 inches) high and has small feathery leaves on either side of the stem. Chickpeas are a type of pulse, with one seedpod containing two or three peas. It has white flowers with blue, violet or pink veins.

The name "chickpea" traces back through the French chiche to cicer, Latin for ‘chickpea’ (from which the Roman cognomen Cicero was taken). The Oxford English Dictionary lists a 1548 citation that reads, "Cicer may be named in English Cich, or ciche pease, after the Frenche tongue." The dictionary cites "Chick-pea" in the mid-18th century; the original word in English taken directly from French was chich, found in print in English in 1388.

The word garbanzo came first to English as garvance in the 17th century, from an alteration of the Old Spanish word arvanço (presumably influenced by garroba), being gradually anglicized to calavance, though it came to refer to a variety of other beans (cf. Calavance). The current form garbanzo comes directly from modern Spanish. This word is still used in Latin America and Spain to designate chickpeas.[3] Some have suggested that the origin of the word arvanço is in the Greek erebinthos. Another possible origin is the word garbantzu, from Basque — a non-Indo-European tongue, believed to be one of the oldest languages in Europe — in which it is a compound of garau, seed + antzu, dry.

Domesticated chickpeas have been found in the aceramic levels of Jericho (PPNB) along with Cayönü in Turkey and in Neolithic pottery at Hacilar, Turkey. They were found in the late Neolithic (about 3500 BCE) at Thessaly, Kastanas, Lerna and Dimini, Greece. In southern France Mesolithic layers in a cave at L'Abeurador, Aude have yielded wild chickpeas carbon dated to 6790±90 BCE.[4]

By the Bronze Age, chickpeas were known in Italy and Greece. In classical Greece, they were called erébinthos and eaten as a staple, a dessert, or consumed raw when young. The Romans knew several varieties such as venus, ram, and punic chickpeas. They were both cooked down into a broth and roasted as a snack. The Roman gourmet Apicius gives several recipes for chickpeas. Carbonized chickpeas have been found at the Roman legion fort at Neuss (Novaesium), Germany in layers from the first century CE, along with rice.

Chickpeas are mentioned in Charlemagne's Capitulare de villis (about 800 CE) as cicer italicum, as grown in each imperial demesne. Albertus Magnus mentions red, white and black varieties. Nicholas Culpeper noted "chick-pease or cicers" are less "windy" than peas and more nourishing. Ancient people also associated chickpeas with Venus because they were said to offer medical uses such as increasing sperm and milk, provoking menstruation and urine and helping to treat kidney stones.[5] "White cicers" were thought to be especially strong and helpful.

In 1793, ground-roast chickpeas were noted by a German writer as a substitute for coffee in Europe. In the First World War, they were grown for this use in some areas of Germany. They are still sometimes brewed instead of coffee.

Sequencing of the chickpea genome has been completed for 90 chickpea genotypes, including several wild species. A collaboration of 20 research organizations, led by the International Crops Research Institute for the Semi-Arid Tropics (ICRISAT) identified more than 28,000 genes and several million genetic markers. Scientists expect this work will lead to the development of superior varieties. The new research will benefit the millions of developing country farmers who grow chickpea as a source of much needed income, as well as for its ability to add nitrogen to the soil in which it grows. Production is growing rapidly across the developing world, especially in West Asia where production has grown four-fold over the past 30 years. India is by far the world largest producer but is also the largest importer.

Mature chickpeas can be cooked and eaten cold in salads, cooked in stews, ground into a flour called gram flour (also known as chickpea flour and besan and used frequently in Indian cuisine), ground and shaped in balls and fried as falafel, stirred into a batter and baked to make farinata or panelle.

In the Iberian Peninsula, chickpeas are very popular: In Portugal it is one of the main ingredients in Rancho, consumed with pasta, and meat, including Portuguese sausages, or with rice. they are also often used in other hot dishes with bacalhau and in soup. In Spain they are often used cold in different tapas and salads, as well as in cocido madrileño. In Egypt, chickpeas are used as a topping for Kushari.

Hummus is the Arabic word for chickpeas, which are often cooked and ground into a paste and mixed with tahini, sesame seed paste, the blend called hummus bi tahini, or chickpeas are roasted, spiced, and eaten as a snack, such as leblebi. By the end of the 20th century, hummus had emerged as part of the American culinary fabric. By 2010, 5% of Americans consumed hummus on a regular basis, and it was present in 17% of American households.

Some varieties of chickpeas can be popped and eaten like popcorn.

Chickpeas and Bengal grams are used to make curries and are one of the most popular vegetarian foods in the Indian Subcontinent and in diaspora communities of many other countries. Popular dishes in Indian cuisine are made with chickpea flour, such as Mirchi Bajji and Mirapakaya bajji Telugu. In India, as well as in the Levant, unripe chickpeas are often picked out of the pod and eaten as a raw snack and the leaves are eaten as a green vegetable in salads.

In the Philippines, garbanzo beans preserved in syrup are eaten as sweets and in desserts such as halo-halo. Ashkenazi Jews traditionally serve whole chickpeas at a Shalom Zachar celebration for baby boys.

Guasanas is a Mexican chickpea recipe in which the beans are cooked in water and salt.

Dried chickpeas need a long cooking time (1–2 hours) but will easily fall apart when cooked longer. If soaked for 12–24 hours before use, cooking time can be shortened by around 30 minutes. To make smooth hummus the cooked chickpeas must be processed while quite hot, since the skins disintegrate only when hot.

Chickpeas (Cicer arietinum) do not cause lathyrism. Similarly named "chickling peas" (Lathyrus sativus) and other plants of the genus Lathyrus contain the toxins associated with lathyrism.

Chickpeas are an excellent source of the essential nutrients iron, folate, phosphorus, protein and dietary fiber (USDA nutrient table). Chickpeas are low in fat and most of this is polyunsaturated. The nutrient profile of the smaller variety appears to be different, especially for fiber content which is higher than in the larger light colored variety.