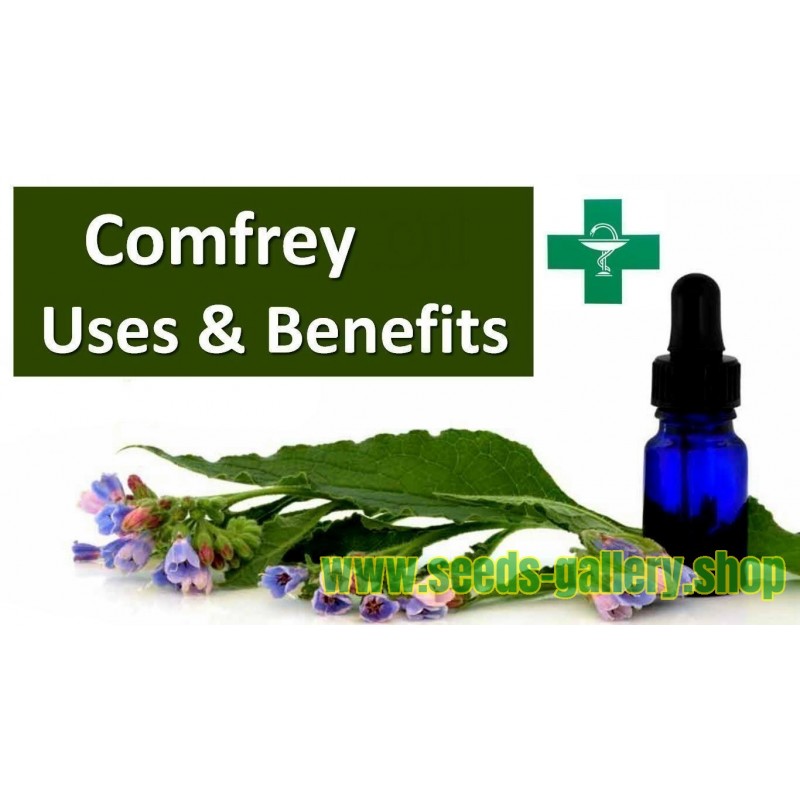 One of the most useful plants on the allotment with the widest range of uses in a permaculture system of any plant.  Comfrey is a herbaceous perennial herb with large, hairy leaves and grows in a rosette to 1

One of the most useful plants on the allotment with the widest range of uses in a permaculture system of any plant.  Comfrey is a herbaceous perennial herb with large, hairy leaves and grows in a rosette to 1 m (3’4”) in height. The mauve flowers are bell-like and borne in clusters that are extremely attractive to insects. The leaves are a useful addition to compost or used as mulch, as they contain silica, nitrogen, magnesium, calcium, potassium, and iron. Comfrey leaves are about 17% nitrogen (horse manure is about 14%) and the leaves readily decompose when soaked in water to make organic liquid manure. Comfrey grows in any soil, preferably moist, in the sun or part shade.

Symphytum officinale is a perennial flowering plant in the family Boraginaceae. Along with thirty four other species of Symphytum, it is known as comfrey. To differentiate it from other members of the genus Symphytum, this species is known as common comfrey[1] or true comfrey.[2] Other English names include Quaker comfrey, cultivated comfrey,[2] boneset, knitbone, consound, and slippery-root.[3] It is native to Europe, growing in damp, grassy places. It is locally frequent throughout Ireland and Britain on river banks and ditches. It occurs elsewhere, including North America, as an introduced species and sometimes a weed. The flowers are mostly visited by bumblebees.[4] Internal or long-term topical use of comfrey is discouraged due to its strong potential to cause liver toxicity.[5]

Over centuries, comfrey was cultivated in Asia, Europe, and the United Kingdom as a vegetable and herbal medicine.[5][6][7] Its early common names, knitbone or boneset, reflect its historical use by poultices of leaves and roots to treat sprains, bruises or bone fractures.[5][6]

Comfrey is a perennial plant found in moist grasslands in western Asia, Europe, and North America.[7] The hardy plant can grow to a height of 1–3 ft (0.3–0.9 m).[7] It is a perennial herb with a black, turnip-like root and large, hairy broad leaves that bears small bell-shaped flowers of various colors, typically cream or purplish, which may be striped.

A common hybrid is formed between Symphytum officinale and S. asperum, Symphytum × uplandicum, known as Russian comfrey, which is widespread in the British Isles, and which interbreeds with S. officinale. Compared to S. officinale, S. × uplandicum is generally more bristly and has flowers that tend to be bluer or violet.[8] The plant produces significant nectar when compared to other UK plants tested.[9]

In folklore, Symphytum officinale roots were used in traditional medicine internally (as an herbal tea or tincture) or externally (as an ointment, compresses, or alcoholic digestion) for treatment of various disorders,[5][7][10] including commonly as a treatment for reducing the pain of osteoarthritis.[11] A 2013 review of clinical studies assessing the possible effect of comfrey on osteoarthritis found the research quality was too low to allow conclusions about its efficacy and safety.[11] In Europe as of 2015, there were no comfrey products for oral use, and those for topical uses to treat bruises or joint pain were evaluated as having risk of liver toxicity.[6]

Comfrey contains pyrrolizidine alkaloids which are toxic compounds readily absorbed via the stomach or skin, and have the potential to increase the risk of fatal liver toxicity.[5][6][12] In 2001, the US Food and Drug Administration and Federal Trade Commission banned the sale of comfrey products from the market due to its potential toxicities.[13][14] A 2018 review on pyrrolizidine alkaloids present in comfrey indicated widespread potential toxicity to humans and livestock and the opportunity for drug development from these compounds.