Variety from United States of America 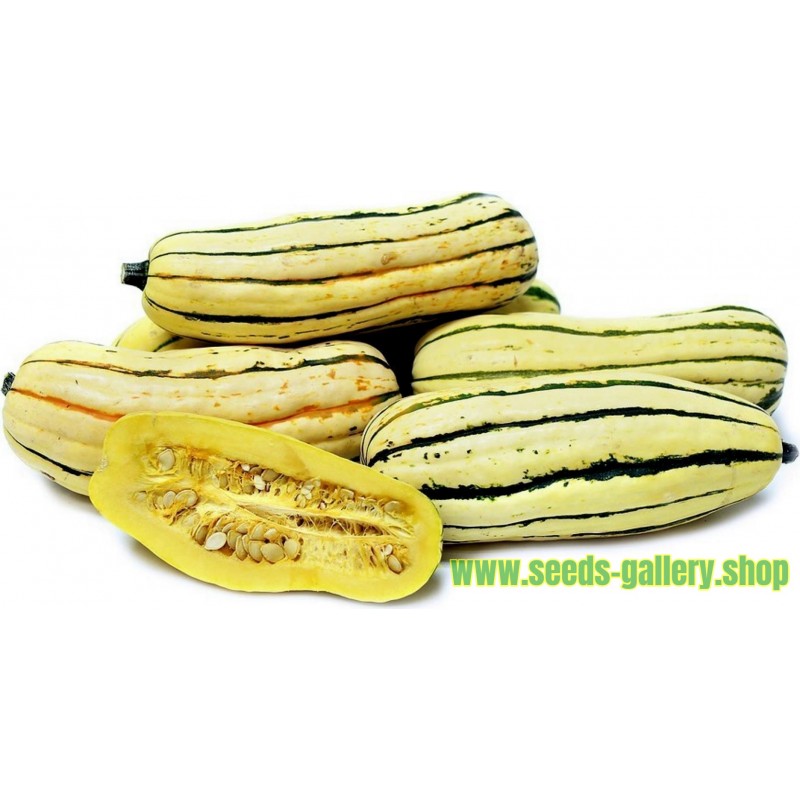 If you have never eaten a Delicata squash, this is the one to grow. The vivid orange flesh color indicates it is rich in Vitamin A.   The sweet flesh is fine-textured without coarse strings,

Delicata squash is a variety of winter squash with cream-colored cylindrical fruits striped in green or orange that are cooked. As its name suggests, it has characteristically a delicate rind (or skin). It is also known as peanut squash, Bohemian squash, or sweet potato squash. It is a cultivar of the species Cucurbita pepo, which also includes the summer squash varieties pattypan squash, zucchini, and yellow crookneck squash, as well as winter squash varieties including acorn squash, spaghetti squash, and most pumpkins used as Jack-o-lanterns.

Delicata squash is easily grown. Seeds are started after all danger of frost is past and the soil is warm or within 3–4 weeks before the predicted last frost date in the area. Seeds directly sown are placed one inch deep, 5-6 to a hill; hills are 6 feet in all directions from other hills. Roughly 105 days after germinating, delicata squash is ready to be harvested. Curing takes approximately a week in a warm, dry place that is protected from frost, such as a garage.

Delicata squash is most commonly baked, but can also be microwaved, sautéed, or steamed. It may be stuffed with meat or vegetable mixtures and is known for its ease of cooking and creamy flavor and texture. The seeds of the squash are also eaten, usually after being toasted. This squash is not as rich in beta-carotene as other winter squashes but is a good source of dietary fiber and potassium, as well as smaller amounts of vitamins C and B, magnesium, and manganese.

Indigenous to North and Central America, squash was introduced to early European settlers by Native Americans. "'Delicata' was first introduced by a seedsman in the USA in 1894 (Tapley et al. 1937), but a fruit very much like those of this cultivar was illustrated by Naudin (1856)." (Paris 1989). As a cultivar, is "more or less unique and is not readily classifiable in any one modern group" (Paris 198). The standard delicata is vinous; however, bush varieties have arisen including 'Bush Delicata' and seed sellers offer varieties with more sweetness as 'Sugar Loaf and 'Honey Boat'. Delicata squash almost disappeared after the Great Depression, and wasn't widely grown due to its susceptibility to mildew diseases. This was changed in the early 2000s, when a group at Cornell University's Department of Plant Breeding, led by Molly Jahn, bred a non-hybrid open-pollinated variety, Cornell's Bush Delicata that was resistant to most known squash diseases, and won the 2002 All-America Selection (AAS), a seed-industry award and is now the primary commercial cultivar.