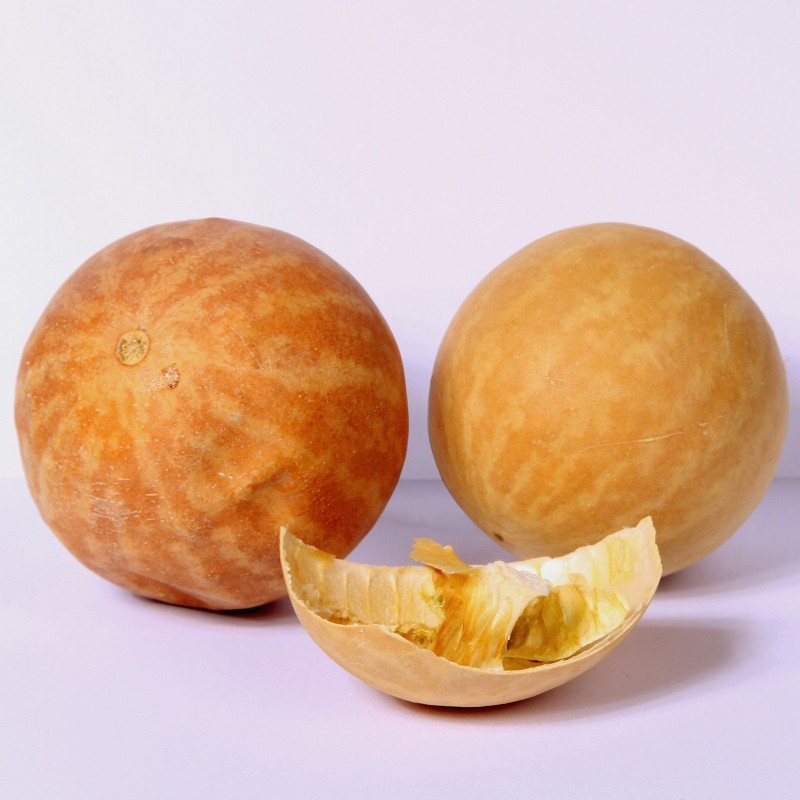 Citrullus colocynthis, with many common names including colocynth, bitter apple, bitter cucumber, desert gourd,[citation needed] egusi, vine of Sodom, or wild gourd, is a desert viny plant native to the

Citrullus colocynthis, with many common names including colocynth, bitter apple, bitter cucumber, desert gourd,[citation needed] egusi, vine of Sodom, or wild gourd, is a desert viny plant native to the Mediterranean Basin and Asia, especially Turkey (especially in regions such as İzmir), and Nubia.

It resembles a common watermelon vine, but bears small, hard fruits with a bitter pulp. It originally bore the scientific name Colocynthis citrullus.

The roots are large, fleshy, and perennial, leading to a high survival rate due to the long tap root. The vine-like stems spread in all directions for a few meters looking for something over which to climb. If present, shrubs and herbs are preferred and climbed by means of axiliary branching tendrils.[4]

Very similar to watermelon, the leaves are palmate and angular with three to seven divided lobes.

The flowers are yellow and solitary in the axes of leaves and are borne by yellow-greenish peduncles. Each has a subcampanulated five-lobed corolla and a five-parted calyx. They are monoecious, so the male (stamens) and the female reproductive parts (pistils and ovary) are borne in different flowers on the same plant. The male flowers’ calyx is shorter than the corolla. They have five stamens, four of which are coupled and one is single with monadelphous anther. The female flowers have three staminoids and a three-carpel ovary. The two sexes are distinguishable by observing the globular and hairy inferior ovary of the female flowers.[4]

The fruit is smooth, spheric with a 5– to 10-cm-diameter and extremely bitter taste. The calyx englobe the yellow-green fruit which becomes marble (yellow stripes) at maturity. The mesocarp is filled with a soft, dry, and spongy white pulp, in which the seeds are embedded. Each of the three carpels bears six seeds. Each plant produces 15 to 30 fruits.[5]

The seeds are grey and 5 mm long by 3 mm wide. They are edible but similarly bitter, nutty-flavored, and rich in fat and protein. They are eaten whole or used as an oilseed. The oil content of the seeds is 17–19% (w/w), consisting of 67–73% linoleic acid, 10–16% oleic acid, 5–8% stearic acid, and 9–12% palmitic acid. The oil yield is about 400 l/hectare.[6] In addition, the seeds contain a high amount of arginine, tryptophan, and the sulfur-containing amino acids.[7]

Cultivated colocynth suffers of climatic stress and diseases such as cucumber mosaic virus, melon mosaic virus, Fusarium wilt, etc. as any other crop. To improve it, a relatively new protocol for regeneration has been developed with the aim of incorporating disease and stress resistance to increase yield potential and security avoiding interspecific hybridization barriers.[11]

Colocynth has been widely used in traditional medicine for centuries.[13] In premodern medicine, it was an ingredient in the electuary called confectio hamech, or diacatholicon, and other laxative pills.[14]

In Arabia the colocynth had numerous uses in traditional medicine, such as a laxative, diuretic, or for insect bites.[15] The powder of colocynth was sometimes used externally with aloes, unguents, or bandages.[14] Troches made of colocynth were called "troches of alhandal" used as an emetic.[14]

The desert Bedouin are said to make a type of bread from the ground seeds. Some confusion exists between this species and the closely related watermelon (Citrullus lanatus (Thunb)), whose seeds may be used in much the same way. In particular, the name "egusi" may refer to either or both plants (or more generically to other cucurbits) in their capacity as seed crops, or for a soup made from these seeds and popular in West Africa. The seed flour is rich in micronutrients, and could therefore be used in food formulations especially in regions with low milk consumption, such as West Africa.[7]

The oil obtained from the seeds (47%) can be used for soap production.[5] The production is not very time- and energy-consuming due to the ability of colocynth to grow on poor soils with just a little moisture and organic fertilizer. The fruits are harvested still unripe by hand, the rind is removed by peeling and the inner pulp filled with seeds is dried in the sun or in ovens. The seeds yield is about 6.7-10 t/ha, which means that for an oil profit of 31-47%, oil yields may reach up to 3 t/ha.[5][16]

Ingestion may cause irritation of the mucous membranes in the gastrointestinal tract, bloody diarrhea, or kidney damage. The ill effects are caused by cytotoxic and antimitotic cucurbitacins. The active substances pass into urine and breast milk and can lead to abortions in pregnant women. Other symptoms of poisoning include ulcers, wall perforation, peritonitis, kidney bleeding and bladder inflammation. Often brain hyperemia, delirium and collapse occur. Death may occur as a result of respiratory arrest. Cross-fertilization of colocynth with watermelon or zucchini sometimes leads to cases of poisoning. Cases of poisoning have also been observed in animals that consumed the fruits. The intake of just 3 g of colocynth and be fatal. Exposure of the skin to the active substances may cause blistering.