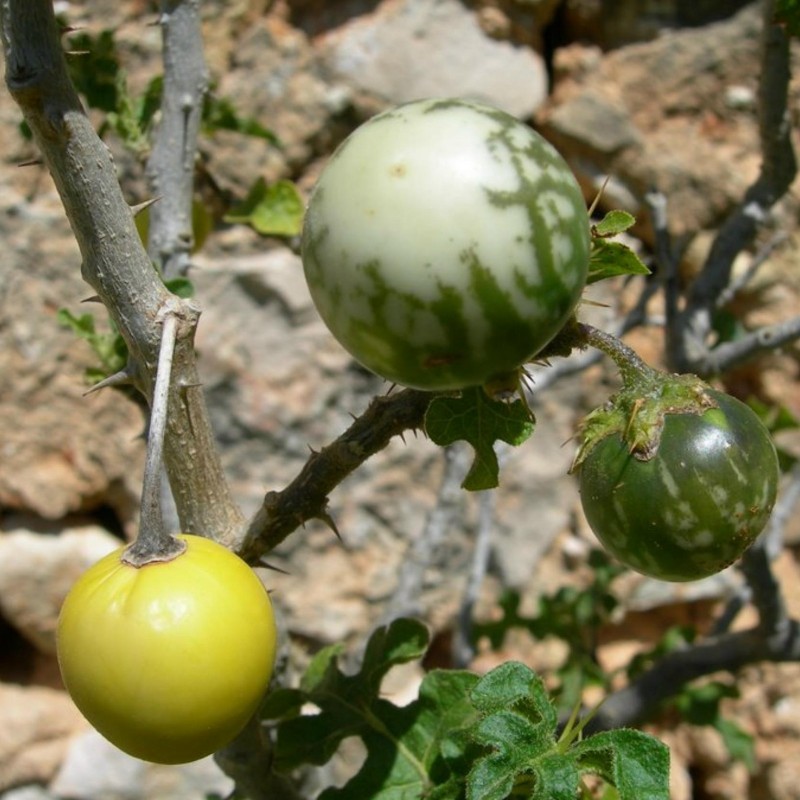 It is of African and Mediterranean origin but was introduced to Australia very early on with it being first collected and cataloged in Australia in the early 1880s.

It is a poisonous plant that is not eaten by anything as far as I can tell, except for the odd grasshopper which seems to become poisoned or drugged, sitting still in a stupor after a while. Handy in the greenhouse.

It is a spiky plant covered in straight needles which I find really cool. I love all the spiky Solanum, the same way some folks like Cacti I guess?

In Southern Africa, it has a long history of traditional use for skin conditions, toothache, cold and fever. Apparently the roots are carried as a talisman, for protection against poisoning.

It has long been used by pastoralists for skin disorders on the stock. Mashed and bound to the area needing treatment, or sliced and rubbed on regularly, its effectiveness where nothing else works is legendary.

Many folks swear by it, and there is a very popular "Devil's Apples Lotion" or "Poison Eggplant cream" made by blending the ripe fruit in olive oil then applying topically to the affected area.

I showed serious promise as a skin cancer treatment and in animal trials, it was shown to be very effective IN SOME CASES. Solamargine and solasonine are still being investigated as cancer treatment options in several places around the world. (There is a company in Vanuatu that currently sells a product under the name Curaderm BEC5, which is said to be effective, but it has not been approved for medical use by any regulatory agency.)

The big thing to remember in other cases it was just FATAL...

This is the reason the trials were discontinued, it wasn't because it didn't work, it's just that it killed and maimed a heap more critters than cancer would have statistically. Therefore it was not a safe or effective treatment in the majority of cases.

Like using a molotov cocktail to light your BBQ. Sure, sometimes it works great!

It is just unfortunate that you more often than not end up losing your eyebrows, blowing up your sausages, and setting fire to the neighbours clothesline...

Solbec told the ASX, among other things, that Coramsine™ brought about total remission of malignant mesothelioma in mice when combined with immunotherapy. Following that announcement, the share price of Solbec increased by some 92 percent.

Solbec later told the ASX that the study had tested Coramsine™ on five mice of which only two had gone into remission of malignant mesothelioma. Solbec elected to comply with the notice. As provided under section 1317DAJ(3)(b) of the Act, compliance with the notice is not an admission of guilt or liability, and Solbec is not regarded as having contravened section 674(2) of the Act.

It is still under investigation for its effects on skin cancer, but it is a poison, and I do not recommend or encourage or advise use, application or ingestion in any way..

It may kill you, or mangle you, just like it did to the mice.

In normal situations as a houseplant or a weed, poisoning is generally not a problem because the plant is rarely eaten, it is spiky and bitter, full of hard seeds and no really fruity flesh to it.

As a weed, it is easy to control as it rarely survives cultivation and its growth is quite slow for a Solanum species. The seeds can sit dormant in the soil for ages, but it is only in pastures this becomes a problem, and that is due to the cattle and sheep eating everything except the Devil's apple. Sensible grazing and occasional hand pulling is an effective control method.

Grasses will outcompete it, if given the chance, and they will block the light to dormant seeds meaning they never get the chance to germinate.

I grow this plant as an ornamental, and I sell the seeds only so you can do the same.

If your plans are to use this plant or its seeds for anything other than ornamental reasons, I humbly request you please bugger off now. Get it elsewhere, I don't need or want the drama your death or maiming could create.

It is a beautiful plant, and in my opinion, that is plenty of reason to grow it.

Like a bushy little rose, but big purple flowers and bright yellow fruits.

Does great in pots, germination takes about 6weeks normally, but it can be erratic. GA3 can often speed things up. Being a weed species it is not permitted to most places so pay attention to the big red text folks.