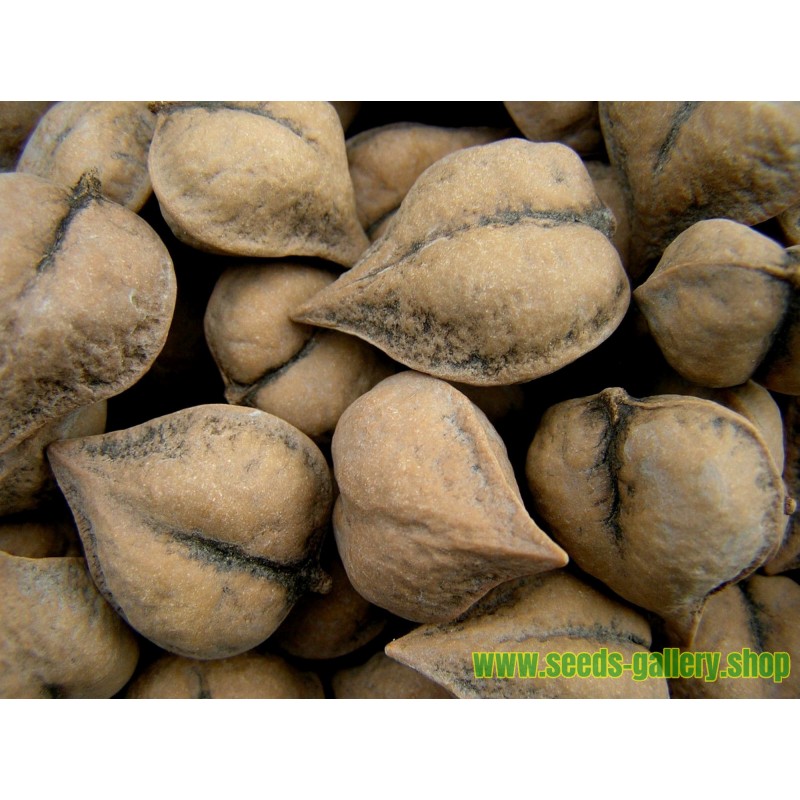 Heartnuts, like their parent the Japanese walnut, have an extremely hard exterior shell. The shell showcases a brown hue, often with darker brown to black striations. Like its name suggests the shell has a heart-like

Heartnuts, like their parent the Japanese walnut, have an extremely hard exterior shell. The shell showcases a brown hue, often with darker brown to black striations. Like its name suggests the shell has a heart-like shape and is smooth with slight ridging. Within the inedible shell lies the edible portion of the Heartnut. The shelled Heartnut has a thin, parchment-like skin that encases a creamy white nutmeat. The meat of the Heartnut has a smooth, soft, slightly oily texture and offers a mild and sweet walnut flavor without the bitterness found in conventional walnuts. Many varieties of Heartnut are fairly easy to crack perfectly in half which reveals a heart-shaped cross-section of the shell and whole, unbroken nutmeat.

Heartnuts are harvested in the fall, once dried they can be available year-round.

Heartnuts, botanically known as part of Juglans ailantifolia var. cordiformis, are a variety of the Japanese walnut and a member of the Juglandaceae family. Also known as Seibold or Cordate walnut, Heartnut is its most common name which not surprisingly was given as a result of the nut's shape that resembles a heart both inside its shell and out. Heartnuts are popular among nut enthusiasts in Japan, the United States, and Canada and today are known not only for their unique shape and superior walnut flavor but also for their tolerance to cold, humidity, and pests, characteristics that many other walnut varieties are lacking.

Heartnuts can be used in many preparations that call for conventional walnuts. Incorporate into baked applications such as banana bread, cookies, granola, cinnamon rolls, and muffins. Like many nuts, toasting will enhance their flavor. Toast, chop, and sprinkle atop oatmeal, fruit crisps, and yogurt. Chopped walnuts can also be added to savory applications such as pasta and green, grain, or potato salads. Heartnuts can be used to make sauces such as pesto, walnut cream sauce, or the Persian pomegranate walnut sauce known as fesenjan. Heartnuts can also be pressed to make walnut oil. When stored in a cool, dry place unshelled Heartnuts will keep for 6 months to a year. They can also be stored in the refrigerator or freezer to prolong their shelf life.

Heartnuts are being studied for their adaptability to see if they would be a viable and potentially improved nut crop for the United Kingdom in terms of the current and future climate there. Unlike many other walnut varieties, the Heartnut is tolerant of a wide range of climatic variances ranging from hot and humid to cold with winter frost, a characteristic that scientists are predicting will be one of great value considering the climate change predicted to occur in the next few decades.

Heartnuts are native to Japan and are a seed sport of the Japanese walnut, which means that both the Japanese walnut and Heartnut share the same species. In the 1860s Japanese walnuts and Heartnuts were first imported to the United States. They quickly caught on as an ornamental tree as a result of their tropical looking foliage. By the 20th century, they were widely available from nurseries and became a popular tree amongst specialty nut growers both in the United States and Canada. Trees grown from seed take approximately 3 to 5 years to produce their first nuts, and grafted trees will produce even earlier. It takes 6 to 8 years for trees to produce a full, commercially viable crop. Once established Heartnut trees will produce consistently high yields and can grow up to 50 feet in height.

The yield starts after 1-3 years, so rather faster than the ordinary walnut.