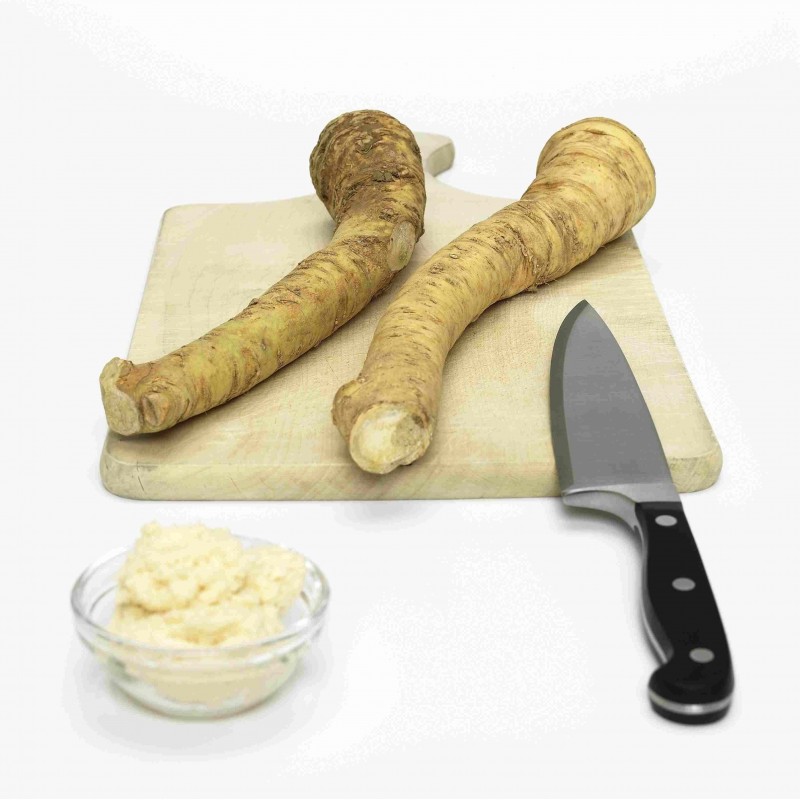 Grow your own horseradish from your own garden (they are also known as thongs). This is an easy plant to grow with a lovely hot tasty reward! Photo is an example of what you will receive

Grow your own horseradish from your own garden (they are also known as thongs).

This is an easy plant to grow with a lovely hot tasty reward!

Photo is an example of what you will receive, those you do receive will differ in size and shape.

Two, Three or Five fresh root sections, ready for planting out - similar but not identical to those pictured.

Use Drop Down List To Choose the Quantity YOU Require

Our planting roots are approx. a minimum of 8-10cm, they may signs of growth, which may need removing before you plant them as this may have suffered from lifting and postage.

Item Supplied: Fresh root sections ready for planting out - similar but not identical to those pictured - as all roots differ in shape and size.

Will grow well in most soil types, if you can't plant straight away it is advisable to place into a pot of compost until you are ready.

These will grow equally well when planting in the ground or large container.

Our horseradish plantation is grown entirely organically, without any need for herbicides, pesticides or fertilizers of any kind.

To ensure top quality stock is sent, we only lift our plants the day of dispatch.

These packages usually fit through your letter box.

Horseradish (Armoracia rusticana, syn. Cochlearia armoracia) is a perennial plant of the Brassicaceae family (which also includes mustard, wasabi, broccoli, and cabbage). It is a root vegetable used as a spice.

The plant is probably native to southeastern Europe and western Asia. It is popular worldwide. It grows up to 1.5 meters (4.9 feet) tall, and is cultivated primarily for its large, white, tapered root.

The intact horseradish root has hardly any aroma. When cut or grated enzymes from the now-broken plant cells break down sinigrin (a glucosinolate) to produce allyl isothiocyanate (mustard oil), which irritates the mucous membranes of the sinuses and eyes. Grated mash should be used immediately or preserved in vinegar for best flavor. Once exposed to air or heat it will begin to lose its pungency, darken in color, and become unpleasantly bitter tasting over time.

Horseradish is probably indigenous to temperate Eastern Europe, where its Slavic name chren seemed to Augustin Pyramus de Candolle more primitive than any Western synonym. Horseradish has been cultivated since antiquity.[6] According to Greek mythology, the Delphic Oracle told Apollo that the horseradish was worth its weight in gold. Dioscorides listed horseradish equally as Persicon sinapi (Diosc. 2.186) or Sinapi persicum (Diosc. 2.168),[8] which Pliny's Natural History reported as Persicon napy;[9] Cato discusses the plant in his treatises on agriculture, and a mural in Pompeii shows the plant. Horseradish is probably the plant mentioned by Pliny the Elder in his Natural History under the name of Amoracia, and recommended by him for its medicinal qualities, and possibly the wild radish, or raphanos agrios of the Greeks. The early Renaissance herbalists Pietro Andrea Mattioli and John Gerard showed it under Raphanus.[10] Its modern Linnaean genus Armoracia was first applied to it by Heinrich Bernhard Ruppius, in his Flora Jenensis, 1745, but Linnaeus himself called it Coclearia armoracia.

Both root and leaves were used as a medicine during the Middle Ages. The root was used as a condiment on meats in Germany, Scandinavia, and Britain. It was introduced to North America during European colonialization both George Washington and Thomas Jefferson mention horseradish in garden accounts.

William Turner mentions horseradish as Red Cole in his "Herbal" (1551–1568), but not as a condiment. In The Herball, or Generall Historie of Plantes (1597), John Gerard describes it under the name of raphanus rusticanus, stating that it occurs wild in several parts of England. After referring to its medicinal uses, he says:

The Horse Radish stamped with a little vinegar put thereto, is commonly used among the Germans for sauce to eat fish with and such like meats as we do mustard.

The word horseradish is attested in English from the 1590s. It combines the word horse (formerly used in a figurative sense to mean strong or coarse) and the word radish.

Horseradish is perennial in hardiness zones 2–9 and can be grown as an annual in other zones, although not as successfully as in zones with both a long growing season and winter temperatures cold enough to ensure plant dormancy. After the first frost in autumn kills the leaves, the root is dug and divided. The main root is harvested and one or more large offshoots of the main root are replanted to produce next year's crop. Horseradish left undisturbed in the garden spreads via underground shoots and can become invasive. Older roots left in the ground become woody, after which they are no longer culinarily useful, although older plants can be dug and re-divided to start new plants.[11][15] The early season leaves can be distinctively different, asymmetric spiky, before the mature typical flat broad leaves start to be developed.

Cooks use the terms "horseradish" or "prepared horseradish" to refer to the grated root of the horseradish plant mixed with vinegar. Prepared horseradish is white to creamy-beige in color. It can be stored for months under refrigeration, but eventually will darken, indicating it is losing flavour and should be replaced. The leaves of the plant, while edible, are not commonly eaten, and are referred to as "horseradish greens", which have a flavor similar to that of the roots.

Horseradish sauce made from grated horseradish root and vinegar is a popular condiment in the United Kingdom and in Poland.[19] In the UK, it is usually served with roast beef, often as part of a traditional Sunday roast; but can be used in a number of other dishes also, including sandwiches or salads. A variation of horseradish sauce, which in some cases may substitute the vinegar with other products like lemon juice or citric acid, is known in Germany as Tafelmeerrettich. Also popular in the UK is Tewkesbury mustard, a blend of mustard and grated horseradish originating in medieval times and mentioned by Shakespeare (Falstaff says: "his wit's as thick as Tewkesbury Mustard" in Henry IV Part II[20]). A very similar mustard, called Krensenf or Meerrettichsenf, is popular in Austria and parts of Eastern Germany.[citation needed] In France, sauce au raifort is popular in Alsatian cuisine.[citation needed] In Russia horseradish root is usually mixed with grated garlic and small amount of tomatoes for color.

In the US the term "horseradish sauce" refers to grated horseradish combined with mayonnaise or salad dressing. Prepared horseradish is a common ingredient in Bloody Mary cocktails and in cocktail sauce, and is used as a sauce or sandwich spread. Horseradish cream is a mixture of horseradish and sour cream and is served alongside au jus for a prime rib dinner.

In Central and Eastern Europe horseradish is called khren (in various spellings like kren) in many Slavic languages, in Austria, in parts of Germany (where the other German name Meerrettich isn't used), in North-East Italy, and in Yiddish (כריין transliterated as khreyn).

In parts of Southern Germany like Franconia, "Kren" is an essential component of the traditional wedding dinner. It is served with cooked beef and a dip made from lingonberry to balance the slight hotness of the Kren.

In Poland, a variety with red beetroot is called ćwikła z chrzanem or simply ćwikła.

In Transylvania and other Romanian regions, Red beetroot with horseradish is also used as a salad served with lamb dishes at Easter called sfecla cu hrean.

In Serbia, ren is an essential condiment with cooked meat and freshly roasted suckling pig.

In Slovenia, and in the adjacent Italian regions of Friuli Venezia Giulia and nearby Italian region of Veneto, horseradish (often grated and mixed with sour cream, vinegar, hard-boiled eggs, or apples) is also a traditional Easter dish.

Further west in the Italian regions of Lombardy, Emilia-Romagna, and Piedmont, it is called "barbaforte (strong beard)" and is a traditional accompaniment to bollito misto; while in north-eastern regions like Trentino-Alto Adige/Südtirol, Veneto and Friuli-Venezia Giulia, it is still called "kren" or "cren". In the southern region of Basilicata it is known as "rafano" and used for the preparation of the so-called "rafanata", a main course made of horseradish, eggs, cheese and sausage.

Horseradish is also used as a main ingredient for soups. In the Polish region of Silesia, horseradish soup is a common Easter Day dish.

In a 100 gram amount, prepared horseradish provides 48 calories and has high content of vitamin C with moderate content of sodium, folate and dietary fiber, while other essential nutrients are negligible in content. In a typical serving of one tablespoon (15 grams), horseradish supplies no significant nutrient content.

The enzyme horseradish peroxidase (HRP), found in the plant, is used extensively in molecular biology and biochemistry primarily for its ability to amplify a weak signal and increase detectability of a target molecule. HRP has been used in decades of research to visualize under microscopy and assess non-quantitatively the permeability of capillaries, particularly those of the brain.

How to Grow Horseradish from Seed

For first season harvests, start the seeds indoors in January to February and transplant out in April. The goal is to achieve large, fully established roots that can be divided and/or replanted. If time is not pressing, direct sow any time from March into summer. Optimal soil temperature: 7-23°C (45-75°F).

Ideal pH: 6.0-6.8. Well drained, warm soil in full sun is best. Raised beds help with both drainage and warmth. Use 1 cup of complete organic fertilizer for every 3m (10′) of row. Newly emerged leaves are edible, or should be left to mature if growing for the roots. The flower petals are also edible — flowers should be removed before they set seeds, as they will self-sow with enthusiasm.

For the leaves, harvest as needed, shortly after they emerge, before they become woody. For the roots, harvest November through March. The roots can also be lifted and stored for spring planting to keep the crop going from season to season.

In our experience, insects do not cause problems for horseradish.

Horseradish is thought to repel aphids and whiteflies, blister beetles, potato beetles, and some varieties of caterpillar. Its flowers attract beneficial predatory hoverflies.

How to plant Horseradish seedlings:

When you get seedlings, plant at a depth of 5-6 cm, planting seedlings horizontally, spacing between seedlings should be 25 cm.
Distance from row to row 70 cm.