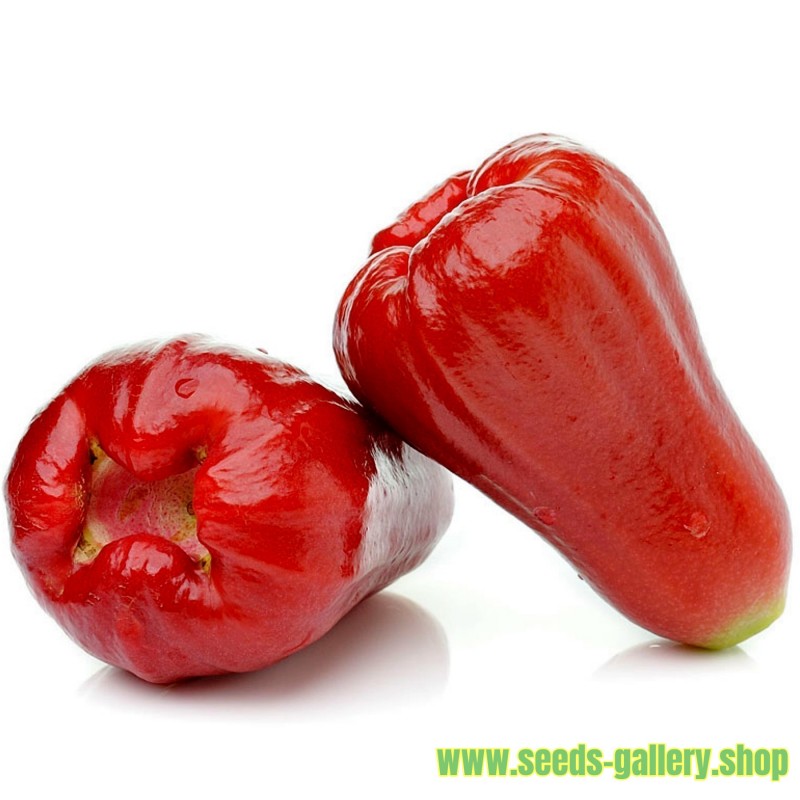 Syzygium samarangense is a plant species in the family Myrtaceae, native to an area that includes the Greater Sunda Islands, Malay Peninsula and the Andaman and Nicobar Islands, but introduced in prehistoric times to a wider area and now widely cultivated in the tropics. Common names in English

Syzygium samarangense is a plant species in the family Myrtaceae, native to an area that includes the Greater Sunda Islands, Malay Peninsula and the Andaman and Nicobar Islands, but introduced in prehistoric times to a wider area and now widely cultivated in the tropics.

Syzygium samarangense is a tropical tree growing to 12 m tall, with evergreen leaves 10–25 cm long and 5–10 cm broad. The flowers are white, 2.5 cm diameter, with four petals and numerous stamens. The fruit is a bell-shaped, edible berry, with colors ranging from white, pale green, or green to red, purple, or crimson, to deep purple or even black, 4–6 cm long in wild plants. The flowers and resulting fruit are not limited to the axils of the leaves, and can appear on nearly any point on the surface of the trunk and branches. When mature, the tree is considered a heavy bearer, yielding a crop of up to 700 fruits.

When ripe, the fruit will puff outwards, with a slight concavity in the middle of the underside of the "bell". Healthy wax apples have a light sheen to them. Despite its name, a ripe wax apple only resembles an apple on the outside in color. It does not taste like an apple, and it has neither the fragrance nor the density of an apple. Its flavor is similar to a snow pear, and the liquid-to-flesh ratio of the wax apple is comparable to a watermelon. Unlike either apple or watermelon, the wax apple's flesh has a very loose weave. The very middle holds a seed situated in a sort of cotton-candy-like mesh. This mesh is edible, but flavorless. The color of its juice depends on the cultivar; it may be purple to entirely colorless.

A number of cultivars with larger fruit have been selected. In general, the paler or darker the color, the sweeter it is.[clarification needed] In Southeast Asia, the black ones are nicknamed "Black Pearl" or "Black Diamond", while the very pale greenish-white ones, called "Pearl", are among the highest priced ones in fruit markets. The fruit is often served uncut, but with the core removed, to preserve the unique bell-shaped presentation.

In the cuisine of Indian Ocean islands, the fruit is frequently used in salads, as well as in lightly sautéed dishes.

In India, water apples are found in East Godavari district of Andhra Pradesh near the dry land areas of Rajanagaram mandal (mainly around G.Donthamuru village surroundings). In Telugu, these are called kammari kayalu (కమ్మరి కాయలు). It is also found throughout Kerala where it is called as Champakka or Chambakka. It is mainly eaten as a fruit and also used to make pickles (Chambakka Achar).

The flowers are astringent and used in Taiwan to treat fever and halt diarrhea. Investigators have found their principal constituent to be tannin. They also contain desmethoxymatteucinol, 5-O-methyl-4'-desmethoxymatteucinol, oleanic acid and B-sitosterol. They show weak antibiotic action against Staphylococcus aureus, Mycobacterium smegmatis, and Candida albicans.