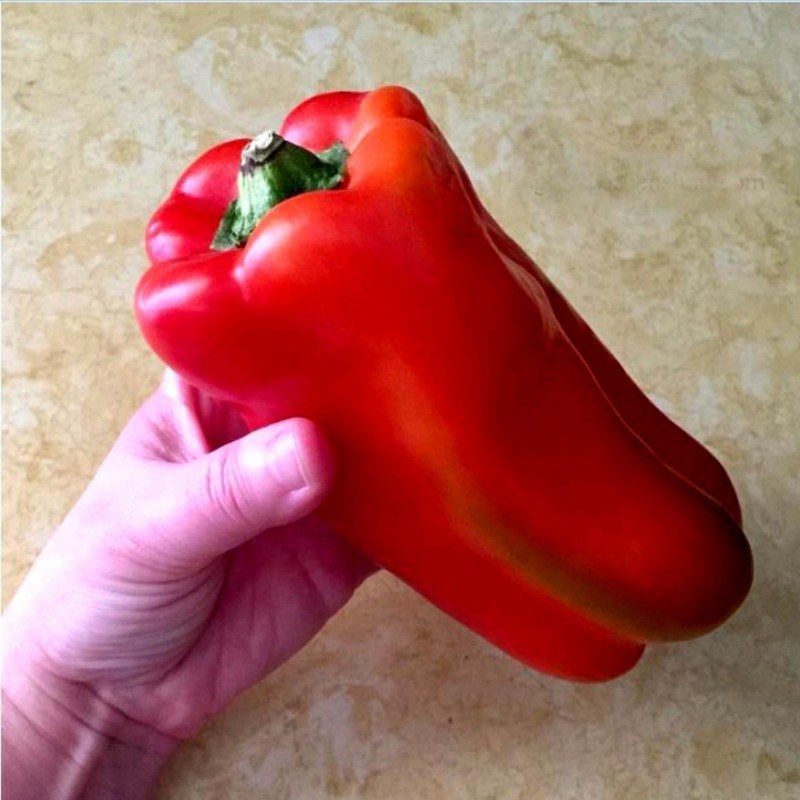 Largo de Reus from Spain is a huge sweet bell pepper from Spain. The aromatic, red pods can reach lengths up to 20 cm.

They are ideal as raw food in the salad, for roasting, stewing, grilling, and stuffing. The plants are prolific and support is recommended…

Capsicum annuum is a species of the plant genus Capsicum (chillies or peppers and capsicums or bell peppers) native to southern North America and northern South America.[1][4] This species is the most common and extensively cultivated of the five domesticated capsicums. The species encompasses a wide variety of shapes and sizes of peppers, both mild and hot, such as bell peppers, jalapeños, New Mexico chile, and cayenne peppers. Cultivars descended from the wild American bird pepper are still found in warmer regions of the Americas.[5] In the past, some woody forms of this species have been called C. frutescens, but the features that were used to distinguish those forms appear in many populations of C. annuum and are not consistently recognizable features in C. frutescens species.

Although the species name annuum means “annual” (from the Latin annus "year"), the plant is not an annual but is frost tender.[7] In the absence of winter frosts it can survive several seasons and grow into a large, shrubby perennial herb.[8] The single flowers are an off-white (sometimes purplish) color while the stem is densely branched and up to 60 cm (24 in) tall. The fruit are berries that may be green, yellow, orange or red when ripe.[9] While the species can tolerate most frost-free climates, C. annuum is especially productive in warm and dry climates.[citation needed]

While generally self-pollinating, insect visitation is known to increase the fruit size and speed of ripening, as well as to ensure symmetrical development. Pepper flowers have nectaries at the base of the corolla, which helps to attract pollinators. The anthers do not release pollen except via buzz pollination, such as provided by bumble bees.[10]

Five colors of peppers in an Israeli supermarket

Common naming in English falls generally in line with the flavor and size of the variant. Larger, sweeter variants are called "capsicums" in Australia and New Zealand and red or green peppers,[11] or "bell peppers" in the United States and Great Britain.[12][13] The smaller, hotter varieties are called chillis,[14] chilies, chile, or chili peppers, or in parts of the US, "peppers".

Capsinoid chemicals provide the distinctive tastes in C. annuum variants. In particular, capsaicin creates a burning sensation ("hotness"), which in extreme cases can last for several hours after ingestion. A measurement called the Scoville scale has been created to describe the hotness of peppers and other foods.

It is employed in medicine, in combination with Cinchona in intermittent and lethargic affections, and also in atonic gout, dyspepsia accompanied by flatulence, tympanitis, paralysis etc. Its most valuable application appears however to be in cynanche maligna (acute diphtheria) and scarlatina maligna (malignant Scarlet fever, used either as a gargle or administered internally.)

In Ayurveda, C. annuum is classified as follows:

Some cultivars grown specifically for their aesthetic value include the U.S. National Arboretum's 'Black Pearl'[17] and the 'Bolivian Rainbow'. Ornamental varieties tend to have unusually colored fruit and foliage with colors such as black and purple being notable. All are edible, and most (like 'Royal Black') are hot.

The potato tuber moth (Phthorimaea operculella) is an oligophagous insect that prefers to feed on plants of the family Solanaceae such as pepper plants. Female P. operculella use the leaves to lay their eggs and the hatched larvae will eat away at the mesophyll of the leaf.

Dear Massimo, we are glad that you are satisfied with our seeds and service.Best RegardsSeeds Gallery Team
Was this review helpful to you? Yes No