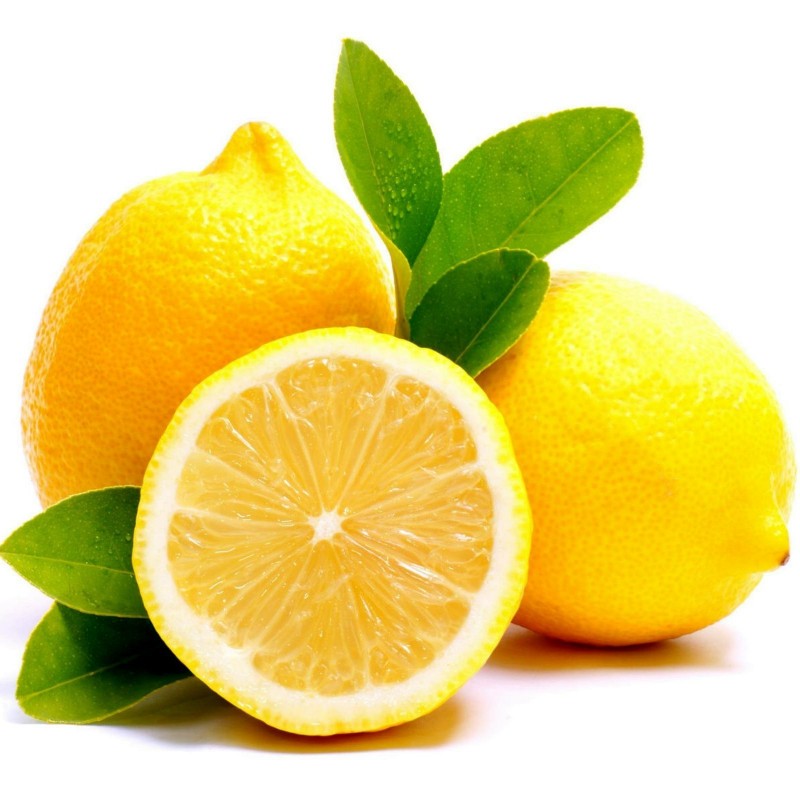 The lemon (Citrus × limon) is a small evergreen tree native to Asia, and the tree's ellipsoidal yellow fruit. The fruit is used for culinary and non-culinary purposes throughout the world, primarily for its juice, though the pulp and rind (zest) are also used in cooking and baking. The juice of the lemon is

The lemon (Citrus × limon) is a small evergreen tree native to Asia, and the tree's ellipsoidal yellow fruit. The fruit is used for culinary and non-culinary purposes throughout the world, primarily for its juice, though the pulp and rind (zest) are also used in cooking and baking. The juice of the lemon is about 5% to 6% citric acid, which gives lemons a sour taste. The distinctive sour taste of lemon juice makes it a key ingredient in drinks and foods such as lemonade.

The origin of the lemon is a mystery, though it is thought that lemons first grew in Assam (a region placed in Northeast India), northern Burma, and China.[1][2] A study of the genetic origin of the lemon reported that it is a hybrid between sour orange and citron.[3]

Lemons were known to the Jews of Jerusalem, who, according to Josephus, pelted an errant high priest with them during a festival in the 90s BC,[4] although Jewish tradition maintains that this was done with citrons, not lemons.[5] They entered Europe near southern Italy no later than the 1st century AD, during the time of Ancient Rome. However, they were not widely cultivated. They were later introduced to Persia and then to Iraq and Egypt around 700 AD. The lemon was first recorded in literature in a 10th-century Arabic treatise on farming, and was also used as an ornamental plant in early Islamic gardens.[1][2] It was distributed widely throughout the Arab world and the Mediterranean region between 1000 and 1150.

The first substantial cultivation of lemons in Europe began in Genoa in the middle of the 15th century.[2] The lemon was later introduced to the Americas in 1493 when Christopher Columbus brought lemon seeds to Hispaniola on his voyages. Spanish conquest throughout the New World helped spread lemon seeds. It was mainly used as an ornamental plant and for medicine.[2] In the 19th century, lemons were increasingly planted in Florida and California.

In 1747, James Lind's experiments on seamen suffering from scurvy involved adding lemon juice to their diets, though vitamin C was not yet known.

The origin of the word lemon may be Middle Eastern. One of the earliest occurrences of "lemon" appears in a Middle English customs document of 1420–1421. The word draws from the Old French limon, thence the Italian limone, from the Arabic laymūn or līmūn ليمون, and from the Persian līmūn لیمو, a generic term for citrus fruit, which is a cognate of Sanskrit निम्ब (nimbū, “lime”).

The Bush lemon tree, a naturalized lemon, grows wild in subtropical Australia. It is very hardy, and has a thick skin with a true lemon flavor; the zest is good for cooking. It grows to about 4 m in a sunny position.

The Eureka grows year-round and abundantly. This is the common supermarket lemon,[12] also known as "Four seasons" (Quatre Saisons) because of its ability to produce fruit and flowers together throughout the year. This variety is also available as a plant to domestic customers.

The Femminello St. Teresa, or Sorrento[14] is native to Italy. This fruit's zest is high in lemon oils. It is the variety traditionally used in the making of limoncello.

The Jhambiri (C. jhambiri), also known as rough lemon and bush lemon, has a rough skin, lemon yellow exterior and a very sour pulp. It is widely used as a rootstock in South Asia.[citation needed]

The Lisbon is a good quality bitter lemon with high juice and acid levels, the fruits of Lisbon are very similar to Eureka. The vigorous and productive trees are very thorny, particularly when young.[citation needed]

The Meyer lemon is a cross between a lemon and possibly an orange or a mandarin, and was named after Frank N. Meyer, who first discovered it in 1908. Thin-skinned and slightly less acidic than the Lisbon and Eureka lemons, Meyer lemons require more care when shipping and are not widely grown on a commercial basis. Meyer lemons have a much thinner rind, and often mature to a yellow-orange color. Meyer lemons are slightly more frost-tolerant than other lemons.

The Ponderosa lemon is more cold-sensitive than true lemons; the fruit are thick-skinned and very large. It is likely a citron-lemon hybrid.

The Variegated Pink is a varietal of the eureka or lisbon cultivars with variegated patterns in the foliage and the rinds of immature green fruit. Upon maturing to yellow, the variegated pattern recedes in the fruit rind. The flesh and juice are pink or pinkish-orange instead of yellow.[citation needed]

The Verna is a Spanish variety of unknown origin.[citation needed]

The Yen Ben is an Australasian cultivar.

Lemon juice, rind, and zest are used in a wide variety of food and drink. Lemon juice is used to make lemonade, soft drinks, and cocktails. It is used in marinades for fish, where its acid neutralizes amines in fish by converting them into non-volatile ammonium salts, and meat, where the acid partially hydrolyzes tough collagen fibers, tenderizing the meat, but the low pH denatures the proteins, causing them to dry out when cooked. Lemon juice is frequently used in the United Kingdom to add to pancakes, especially on Shrove Tuesday.

Lemon juice is also used as a short-term preservative on certain foods that tend to oxidize and turn brown after being sliced, such as apples, bananas and avocados, where its acid denatures the enzymes that cause browning and degradation.

Lemon juice and rind are used to make marmalade and lemon liqueur. Lemon slices and lemon rind are used as a garnish for food and drinks. Lemon zest, the grated outer rind of the fruit, is used to add flavor to baked goods, puddings, rice and other dishes.

Preserved lemons are a part of Moroccan cuisine. They are also one of the main ingredients in many Indian cuisines. Either lemon pickle or mango pickle is part of everyday lunches in Southern India.

The leaves of the lemon tree are used to make a tea and for preparing cooked meats and seafoods.

Lemons were the primary commercial source of citric acid prior to the development of fermentation-based processes.

As a cleaning agent

The juice of the lemon may be used for cleaning. A halved lemon dipped in salt or baking powder is used to brighten copper cookware. The acid dissolves the tarnish and the abrasives assist the cleaning. As a sanitary kitchen deodorizer the juice can deodorize, remove grease, bleach stains, and disinfect; when mixed with baking soda, it removes stains from plastic food storage containers.[17] The oil of the lemon's peel also has various uses. It is used as a wood cleaner and polish, where its solvent property is employed to dissolve old wax, fingerprints, and grime. Lemon oil and orange oil are also used as a nontoxic insecticide treatment.

A halved lemon is used as a finger moistener for those counting large amounts of bills, such as tellers and cashiers.

Lemon oil may be used in aromatherapy. Researchers at The Ohio State University found that lemon oil aroma does not influence the human immune system, but may enhance mood.[18] The low pH of juice makes it antibacterial, and in India, the lemon is used in Indian traditional medicines Siddha Medicine and Ayurveda.