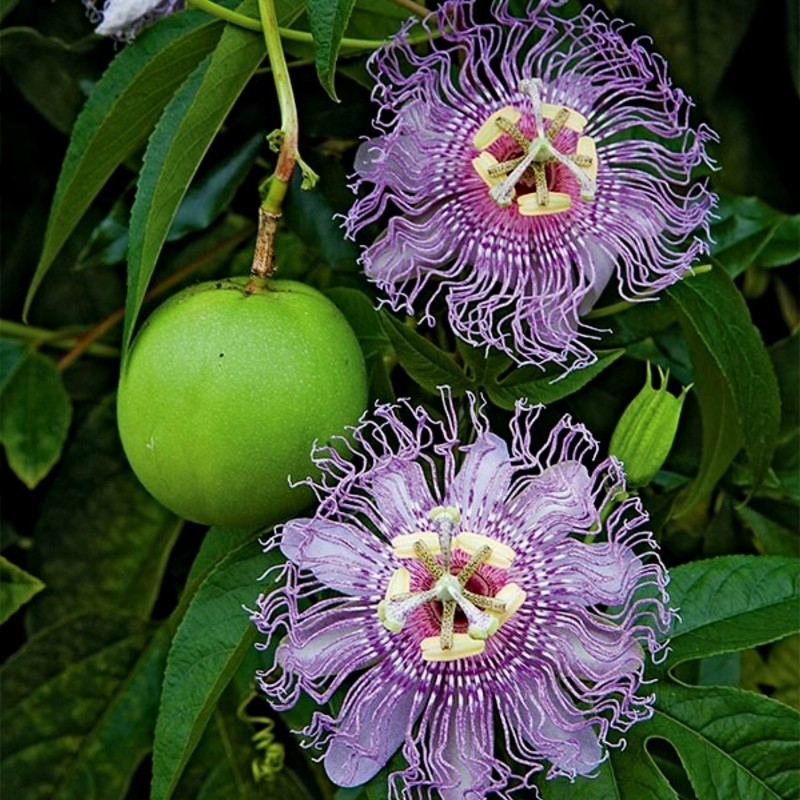 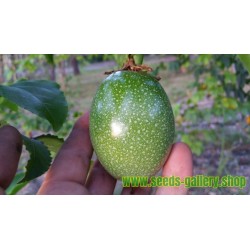 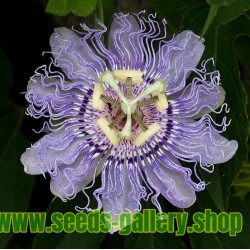 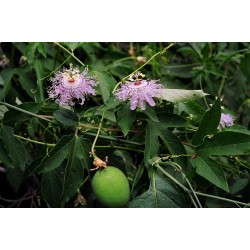 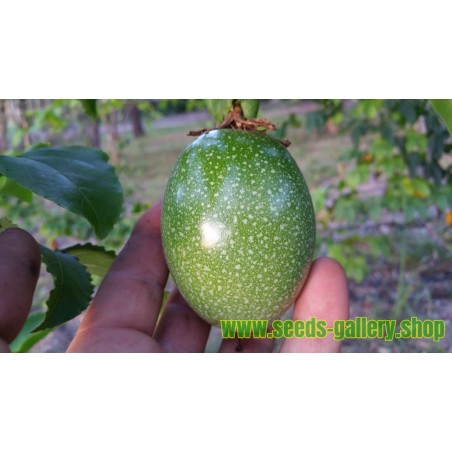 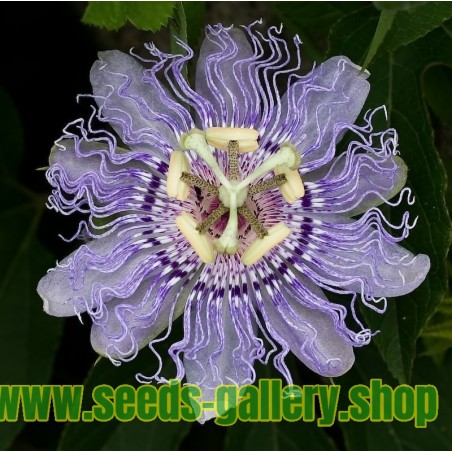 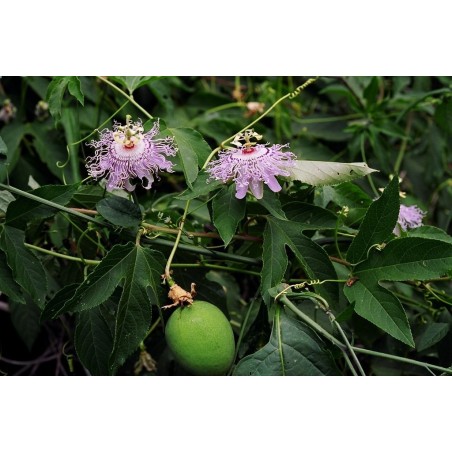 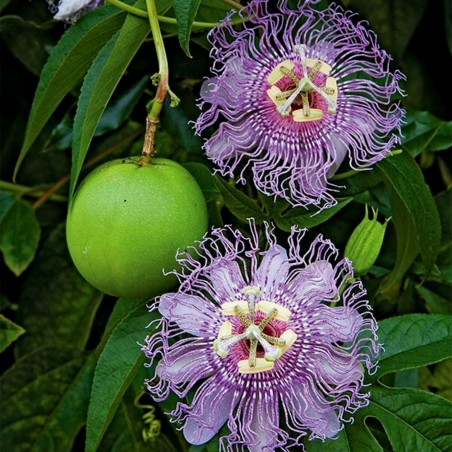 Passiflora incarnata, commonly known as maypop, purple passionflower, true passionflower, wild apricot, and wild passion vine, is a fast-growing perennial vine with climbing or trailing stems. A member of the passionflower genus Passiflora, the maypop has large, intricate flowers with prominent styles and stamens. One of the hardiest species of passionflower, it is a common wildflower in the southern United States. The Cherokee in the Tennessee area called it ocoee; the Ocoee River and valley are named after this plant, which is the Tennessee state wildflower.[1] This, and other passionflowers are the exclusive larval host plants for the Gulf fritillary and non-exclusive for the variegated fritillary butterflies.

The stems can be smooth or pubescent; they are long and trailing, possessing many tendrils. Leaves are alternate and palmately 3-lobed and occasionally 5-lobed, measuring 6–15 centimetres (2.4–5.9 in). They have two characteristic glands at the base of the blade on the petiole. Flowers have five bluish-white petals. They exhibit a white and purple corona, a structure of fine appendages between the petals and stamens. The large flower is typically arranged in a ring above the petals and sepals. They are pollinated by insects such as bumblebees and carpenter bees, and are self-sterile. The flower normally blooms in July.

The fleshy fruit, also referred to as a maypop, is an oval yellowish berry about the size of a hen egg; it is green at first, but then becomes orange as it matures. As with other passifloras, it is the larval food of a number of butterfly species, including the zebra longwing and Gulf fritillary. In many cases its fruit is very popular with wildlife. The egg-shaped green fruits 'may pop' when stepped on. This phenomenon gives the P. incarnata its common name.

The maypop occurs in thickets, disturbed areas, near riverbanks, and near unmowed pastures, roadsides, and railroads. It thrives in areas with lots of available sunlight. It is not found in shady areas beneath a forest canopy.

In cooking, the fruit of this variety is sometimes used for jam and jellies or as a substitute for its commercially grown South American relative Passiflora edulis – the fruit is of comparable size and juice yield, hence chilled maypop juice is a delicious treat in hot summer weather. The fruit can be eaten out of hand and historically it was a favorite of colonial settlers of the South and Native Americans alike. Today it is a very common plant growing in gardens in the American Southeast and parts of the Mid-Atlantic for this purpose as well as its showy violet flowers,[17] and still is a favorite of Cajuns, as evidenced by their name for the plant: liane de grenade, or "pomegranate vine".

One review found support for P. incarnata in anxiety disorders. Other review found the evidence insufficient to make any claims about health effects.

P. incarnata may increase main effects or side effects of medications listed above.

Pregnant or breast-feeding women should not use P. incarnata. The effects of the plant compounds on reproduction or on unborn child have not been tested yet. The consumption of this plant may prejudice the ability to drive and use machinery.

Historically, the plant been used as a herbal medicine to treat nervous anxiety and insomnia.[11] The dried, ground herb is frequently used in Europe by drinking a teaspoon of it in tea. A sedative chewing gum has even been produced albeit no sedative qualities have been noted, nor medical benefits beyond placebo.

P. incarnata has been used to reduce hypertension. Methanol extractions from the leaves has been reported to be an effective antitussive in mice.

After being brought to Europe, it became a popular remedy in herbology as a natural remedy for the relief of mild symptoms of mental stress, anxiety nervousness, constipation, dispepsia, mild infections and insomnia. "Today, passionflower is officially included in the national pharmacopeias of France, Germany, and Switzerland and is also monographed in the British Herbal Pharmacopoeia and the British Herbal Compendium, the ESCOP monographs, the Community Herbal Monographs of the EMA, the German Standard Licences, the German Homoeopathic Pharmacopoeia, the Homoeopathic Pharmacopoeia of the United States, and the Pharmacopeia of Egypt. In Poland, it has been prescribed to cure disorders such as hysteria and neurasthenia. Presently, P. incarnata is commonly used in phytotherapy as a mild sedative and anxiolytic. The botanical drugs included in the current European and British Pharmacopoeias are the dried aerial parts of the plant".

In North America it is used for the treatment of diarrhea, premenstrual syndrome, dysmenorrhea, neuralgia, burns, hemorrhoids, insomnia, muscle cramps, hysteria, neuralgia, and as a pain reliever for various conditions. P. incarnata is still used by Native Americans, for example Cherokees use the root of the plant as topical antiinflammatory medicine. Tea made from the roots is used as a tonic for the liver and for skin boils. The extracts of P. incarnata were also used for the relief of nervousness, abdominal cramps and anxiety.

In other parts of the world, P. incarnata is used for the treatment of partially different diseases. For example, in Argentina and Mexico, it is consumed for its sedative effects, whereas in Brazil it is used as an analgesic, antispasmodic, anti-asthmatic, wormicidal and sedative. In India however, it has been used to treat morphine dependence, but in Vietnam sleeplessness, anxiety and high blood pressure have been treated with extracts from this plant. In the Middle East P. incarnata has again slightly different applications, for example in Turkey, dysmenorrhoea, epilepsy, insomnia, neurosis and neuralgia are treated with P. incarnata. But it has also been used as a sedative and narcotic medicine in Iraq. "In the African countries of Rwanda, Kenya and Congo P. incarnata is used as a folk remedy by herbalists and natural health practitioners for its sedative, nervine, anti-spasmodic and analgesic effects. In Australia, it is commonly prescribed as a sedative and anxiolytic medicine .

Some notable substances in P. incarnata are flavonoids, but also alkaloids and other phyto-constituents can be found.

Flavonoids are the main component in P. incarnata. They can reach up to 2.5% of the total content. The greatest concentration of flavonoids has been reported to be in the leaves. Following flavonoids can be found in P. incarnata: chrysin, apigenin, luteolin, quercetin, kaempferol and isovitexin.[14] The flavonoid chrysin is thought to be the main substance responsible for the sedative effect of P. incarnata. The anxiety-reducing property is caused by the binding of chrysin to GABA-Benzodiazepinreceptors.[15] Little amounts of alkaloids has been reported in P. incarnata (<0.005%). Examples for alkaloids are: harmol, harmine, harmalol.[14] Other substances existing in P. incarnata includes mono- and polysaccharides, amino acids and essential oils.

P. incarnata can potentially become an agricultural weed. The gender Passiflora introduced for agricultural purpose has been reported as an important weed in certain regions of the world.[18] This plant is listed as invasive by the Department of Agriculture of the United-States according to these two authoritative sources:[19] Weeds of Kentucky and adjacent states: a field guide[20] and Weeds of the United States and Canada.

Mechanical control as removing the suckers regularly is advised to prevent the spreading of maypop. It is also recommended to train the vines onto trellis and fences to limit propagation.

P. incarnata extracts can be potentially used to produce organic sunscreens with a protective defense against UV radiations. The use of these plant compounds would diminish the concentration of synthetic UV filters in sunscreens. 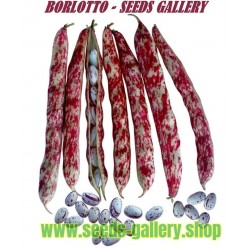 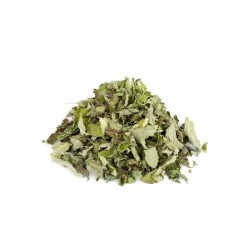 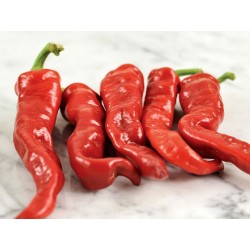 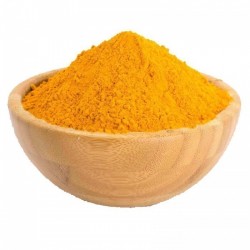 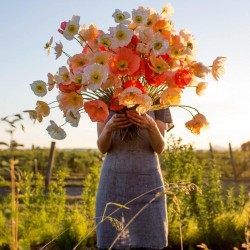