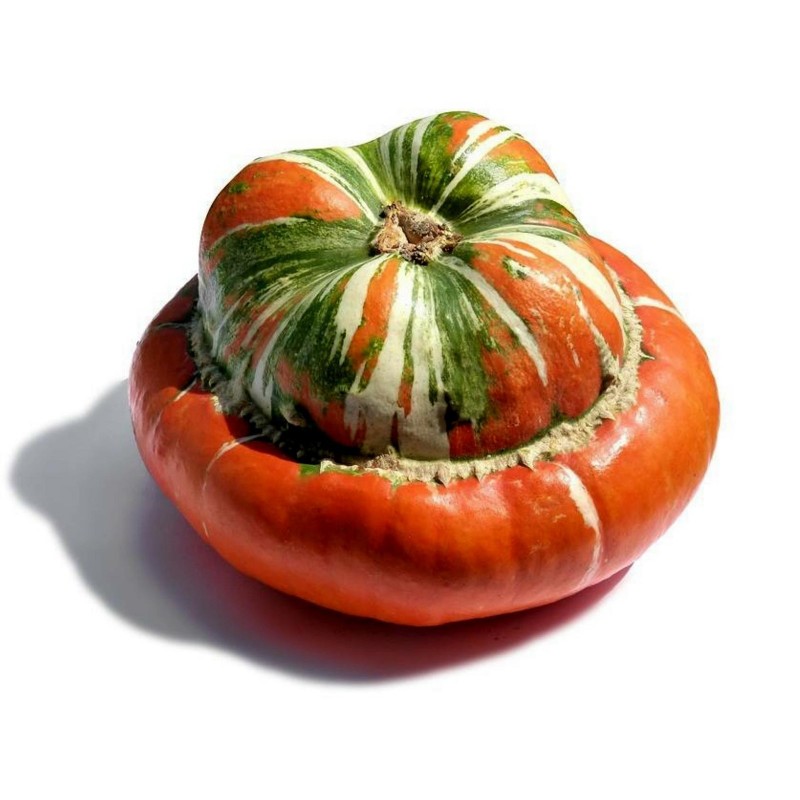 Turban squash can range in color from mottled green, orange to yellow in color, often displaying all of these colors on a single squash. At its blossom end is a turban-like cap, thus its name. This ornamental and edible

Turban squash can range in color from mottled green, orange to yellow in color, often displaying all of these colors on a single squash. At its blossom end is a turban-like cap, thus its name. This ornamental and edible variety can measure ten to fifteen inches in diameter and is heavy for its size. Wrapped in a thin but hard shell, the fine-textured orange flesh can vary from mild to sweet depending upon variety. When cooked the flesh has a floury texture that lends itself well to soups and stews.

Current Facts
The Turban squash, botanically classified as part of Cucurbita maxima, is a group of squashes known for having a shape similar to that of their namesake. Commonly known types are Turk’s Turban, French Turban, American Turban, and Marina di Chioggia. Due to the Turban squash's bright colors, unique shape, and semi-bland flavor, it is most frequently used today as an ornamental squash.

Applications
The large size and unique shape of the Turban squash make it a task to cut. Typically the acorn like protrusion is sliced off first then both that and the round cap are cut into wedges or cubes. The cut squash can then be cooked and then once cooled the skin removed. Turban squash shines when baked, roasted, and steamed. Cooked squash can be used whole as an accompaniment to meats and vegetable mains or pureed and added to soups, stews, and sauces as a thickener. The mild flesh of this winter squash pairs well with a wide range of companion ingredients such as pear, apple, chard, corn, kale, parsley, cilantro, nutmeg, cardamom, brown sugar, butter, cream, melting and hard cheeses, toasted nuts, ground beef, bacon, and roasted chicken. To store: keep the whole, uncut, squash in a cool dry place. Care should be taken to not damage the cap of the squash as it is the most delicate part of the Turban squash and where rot is most likely to occur first. Once cut it is best to wrap cut pieces in plastic and store in the refrigerator for up to one week.

Ethnic/Cultural Info
The Turban squash was known in France as Giraumon Turban and images of it can be found in Vilmorin-Andrieux’s famous album of illustrations, Les Plantes Potagères. A reprint book of his illustrations uses a close-up of the Turban squash featured on plate No. 23 originally illustrated in 1871 as the book’s cover photo.

Geography/History
The Turban squash is first mentioned in the 1818 publication of Le Bon Jardinier. Prior to 1818, there was no doubt turban shaped varieties though eating quality was so poor that there is little documentation of these varieties. A variety known as the French Turban is said to predate 1820, its flavor was bland and texture watery, so it was predominantly used as an ornamental. This French Turban, however, would go on to be parent along with the hubbard, acorn, and autumnal marrow to the American Turban which offered a much more desirable flavor and texture. Turban squash grows on vines which can reach eight to ten feet in length. Squash tends to be ready for harvest within 115 days of planting and should be harvested before the first hard frost of the season.