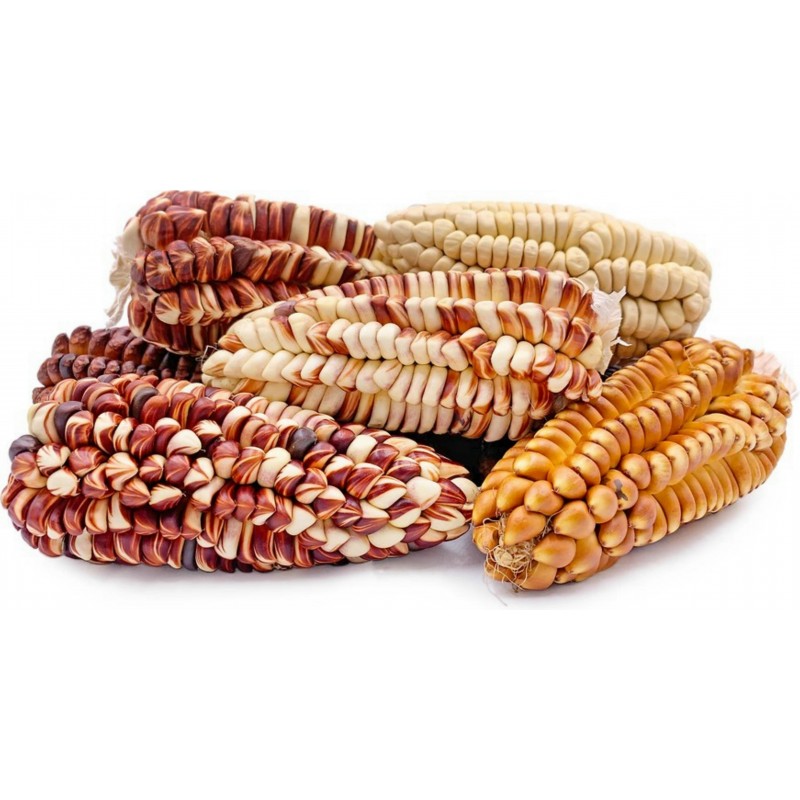 Large-kernel variety of field corn from the Andes, kernel is white-red color. Excellent for cooking and baking, very sweet and large grain so it is best used for cooking. One of the most widely

Large-kernel variety of field corn from the Andes, kernel is white-red color. Excellent for cooking and baking, very sweet and large grain so it is best used for cooking.

One of the most widely-consumed foodstuffs in Peruvian cuisine. This corn has been planted in Peru since at least 1200 BC. The ancient Peruvian farmers achieved a degree of sophistication in the selection and creation of new varieties which adapted to varying terrains and climates.

Sixteenth-century Spanish chronicler Bernabé Cobo wrote how in ancient Peru one could find corn (known locally as choclo) in every color under the sun: white, yellow, purple, black, red and mixed. Today, farmers along the Peruvian coast, highlands and jungle grow more than 55 varieties of corn, more than anywhere else on Earth.

Native historian Inca Garcilaso de la Vega, in his Royal Commentaries of the Incas, wrote in detail on eating habits in colonial times. In those days, corn was a key part of nutritional needs, and the locals called it Sara, eating it roasted or boiled in water. On major occasions, they milled the kernels to bake a type of bread called tanta or huminta. For solemn events such as the Festival of the Sun (Inti Raymi), they would bake breadrolls called zancu. The Peruvian corn was also roasted and called the same today as it was then: cancha (the predecessor of popcorn).

Today, Peru features regional varieties on ways to prepare delicious dishes based on corn. In northern Peru, the locals are particularly fond of pepián, a stew based on grated corn kernels mixed with onion, garlic and the chilli pepper and which takes on a particularly heightened flavor when cooked with turkey. Arequipa inhabitants prepare a dish called soltero (beans, corn, onion and dressing made from fresh cheese). In the jungle, one of the most typical dishes, inchi cache, is made from chicken cooked in a stew made of roasted corn and peanuts. Desserts include the sanguito (made from yellow cornflour, cooking fat, raisins and a sugarcane molasses called chancaca).

Peruvian Corn is also used to make cornmash pastries called tamales and humitas, which can come in a wide range of colors and flavors (green, brown and yellow; sweet and savory); peruvian corn is also the main ingredient of the chicha morada (drink made from purple corn) or chicha de jora (fermented corn beer) and the sweet purple corn jelly called mazamorra, for special occasions. 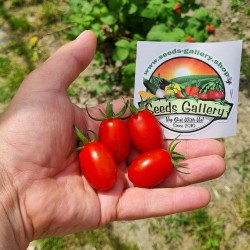 Regular price €2.05 -22% Price €1.60 (SKU: VT 3 D)
Offer ends in:
Seeds Gallery Shop,
5/ 5
<h2 class=""><strong>Datterino - Datterini Cherry Tomato Seeds</strong></h2> <h2><span style="color: #ff0000;"><strong>Price for Package of 10 seeds.</strong></span></h2> <p>Datterini is a super productive tomato variety native to Italy from the island of Sicily, a healthy variety, easily grown. Clusters with fruits of 15-20 gr weight on average. The fruits are sweet, mushy and firm, the skin of the fruit is very thin.</p> <p>Datterini tomatoes are by far the sweetest tomatoes and have a lovely inviting aroma. Their elongated shape holds fewer seeds than other varieties, and they also boast a thicker skin with more flesh.</p> <p>Excellent resistance to cracking and apical rot, the fruits can stay ripe for a long time on the plants without being damaged. The variety is resistant to many diseases that attack tomatoes</p> <script src="//cdn.public.n1ed.com/G3OMDFLT/widgets.js"></script>
VT 3 D (10 S)

Regular price €1.65 -18% Price €1.35 (SKU: VT 15)
Offer ends in:
Seeds Gallery Shop,
5/ 5
<!DOCTYPE html> <html> <head> <meta http-equiv="Content-Type" content="text/html; charset=UTF-8" /> </head> <body> <h2><strong>Garden Peach Tomato Seeds</strong></h2> <h2><span style="color: #ff0000;"><strong>Price for Package of<strong> 10 or 20 </strong>seeds.</strong></span></h2> <p>Peach tomatoes, like other peach-type tomato varieties, have a soft fuzz that covers their skin. The creamy yellow fruit (approx weight 80-90 grams) is about 5 centimeters (two inches) in size with superb taste and texture and is allegedly the sweetest of all peach tomato varieties. The fruity flavor is complex, with sweet well-balanced components. The fruits ripening approximately 80 days after transplanting. The indeterminate, regular leaf plant is extremely productive, yielding thousands of the round, delicate fruit continuously over the course of the season.</p> <p>Peach tomatoes have such a great natural flavor that they are fit for eating right off the vine. Their depth of sweetness is best eaten fresh, so they are not often used for preserves. They work beautifully in salads, or they can simply be drizzled with a bit of olive oil and sprinkled with chopped basil. They are also a nice complement to the dark, rich, slightly salty black Krim heirloom tomato. Store tomatoes at room temperature until fully ripe, after which refrigeration can slow the process of decay.</p> <p>Garden Peach tomatoes are a cultivar of tomato, native South American fruit mainly from Peru. It was the winner of the heirloom taste test in 2006 and has won numerous other contests thanks to its fruity yet spicy, complex tomato flavor.</p> </body> </html>
VT 15 (10 S)