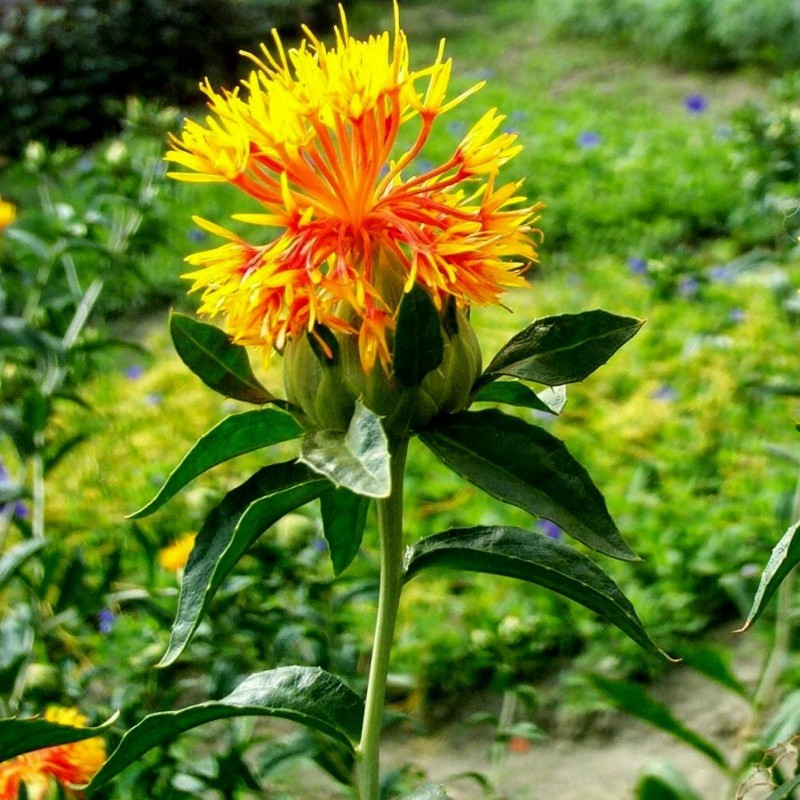 Safflower (Carthamus tinctorius) is a highly branched, herbaceous, thistle-like annual plant. It is commercially cultivated for vegetable oil extracted from the seeds and was used

Safflower (Carthamus tinctorius) is a highly branched, herbaceous, thistle-like annual plant. It is commercially cultivated for vegetable oil extracted from the seeds and was used by the early Spanish colonies along the Rio Grande as a substitute for saffron. Plants are 30 to 150 cm (12 to 59 in) tall with globular flower heads having yellow, orange, or red flowers. Each branch will usually have from one to five flower heads containing 15 to 20 seeds per head. Safflower is native to arid environments having seasonal rain. It grows a deep taproot which enables it to thrive in such environments.

Safflower is one of humanity's oldest crops. Chemical analysis of ancient Egyptian textiles dated to the Twelfth Dynasty identified dyes made from safflower, and garlands made from safflowers were found in the tomb of the pharaoh Tutankhamun.[3] John Chadwick reports that the Greek name for safflower κάρθαμος (kārthamos) occurs many times in Linear B tablets, distinguished into two kinds: a white safflower (ka-na-ko re-u-ka, 'knākos leukā'), which is measured, and red (ka-na-ko e-ru-ta-ra, 'knākos eruthrā') which is weighed. "The explanation is that there are two parts of the plant which can be used; the pale seeds and the red florets."

The early Spanish colonies along the Rio Grande in New Mexico used safflower as a substitute for saffron in traditional recipes. An heirloom variety originating in Corrales, New Mexico, called "Corrales Azafran", is still cultivated and used as a saffron substitute in New Mexican cuisine.

In 2016, global production of safflower seeds was 948,516 tonnes, led by Russia with 30% of the total. Other significant producers were Mexico and Kazakhstan.

Traditionally, the crop was grown for its seeds, and used for coloring and flavoring foods, in medicines, and making red (carthamin) and yellow dyes, especially before cheaper aniline dyes became available.[3] For the last fifty years or so, the plant has been cultivated mainly for the vegetable oil extracted from its seeds.

Safflower seed oil is flavorless and colorless, and nutritionally similar to sunflower oil. It is used mainly in cosmetics and as cooking oil, in salad dressing, and for the production of margarine. INCI nomenclature is Carthamus tinctorius.

There are two types of safflower that produce different kinds of oil: one high in monounsaturated fatty acid (oleic acid) and the other high in polyunsaturated fatty acid (linoleic acid). Currently the predominant edible oil market is for the former, which is lower in saturated fats than olive oil. The latter is used in painting in the place of linseed oil, particularly with white paints, as it does not have the yellow tint which linseed oil possesses.

Safflower flowers are occasionally used in cooking as a cheaper substitute for saffron, sometimes referred to as "bastard saffron".

The dried safflower petals are also used as a herbal tea variety.

In coloring textiles, dried safflower flowers are used as a natural dye source for the orange-red pigment carthamin. Carthamin is also known, in the dye industry, as Carthamus Red or Natural Red 26.

In Japan, dyers have mastered the technique of producing a bright red to orange-red dye (known as carthamin) from the dried florets of safflower (Carthamus tinctorius). A bath solution of cold water is first prepared, to which is added the collected flowers. Steeping in cold water releases a yellow pigment (colorant) which, after straining, is discarded. After pressing and drying once again the red petals, the petals are re-hydrated again, at which time alkali made from straw-ash is added to release the red colorant. The batch is then kneaded with one's hands and strained. Vinegar is then added to the solution, and the colorant is soaked up by using strips of linen. The strips of linen (now red) are then placed in a separate container and alkali is added once more to release the red absorbed by the linen. The solution obtained is then poured into a separate container. An extract made from a type of plum causes the colorant to precipitate onto a piece of silk. The colorant at this stage has the consistency of fine, red mud. Color used as a dye can be diluted.[9] 1.5 kilograms (3.3 lb) of dried florets produces enough dye pigment to dye a small piece of fabric. The dye color is fixed in the fabric with a mordant. Darker shades are achieved by repeating the dyeing process several times, having the fabric dry, and redyed.

In preliminary research where high-linoleic safflower oil replaced animal fats in the diets of people with heart disease, the group receiving safflower oil in place of animal fats had a significantly higher risk of death from all causes, including cardiovascular diseases.