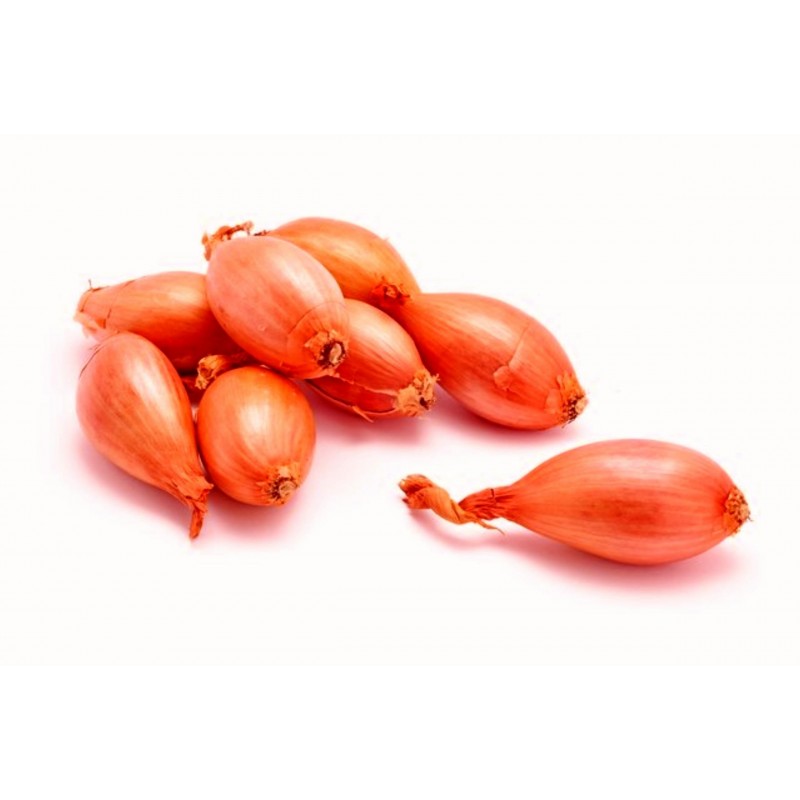 Price for package with 5 Bulbs

Grown in Brittany, in the heart of France’s main shallot growing region, these superb certified varieties are of superior quality and will produce an outstanding crop for you.

The shallot is a type of onion, specifically a botanical variety of the species Allium cepa.

The shallot was formerly classified as a separate species, A. ascalonicum, a name now considered a synonym of the currently accepted name.

Its close relatives include the garlic, leek, chive, and Chinese onion.

Shallots are called "small onions" in South India and are used extensively in cooking there.

Shallots probably originated in Central or Southwest Asia, travelling from there to India and the eastern Mediterranean. The name "shallot" comes from Ashkelon, an ancient Canaanite city,[5] where people in classical Greek times believed shallots originated.[6]

The name shallot is also used for the Persian shallot (A. stipitatum), from the Zagros Mountains in Iran and Iraq. The term shallot is further used for the French red shallot (Allium cepa var. aggregatum, or the A. cepa Aggregatum Group) and the French gray shallot or griselle (Allium oschaninii), a species referred to as "true shallot";[6] it grows wild from Central to Southwest Asia. The name shallot is also used for a scallion in New Orleans and among English-speaking people in Quebec while the term French shallot refers to the plant referred to on this page.[7] Anglophone Quebecers and British English speakers stress the second syllable of shallot.

The term eschalot, derived from the French word échalote, can also be used to refer to the shallot.[8]

Onion and shallot output in 2005

Shallots on sale in India

Like garlic, shallots are formed in clusters of offsets with a head composed of multiple cloves. The skin colour of shallots can vary from golden brown to gray to rose red, and their off-white flesh is usually tinged with green or magenta.

Shallots are extensively cultivated for culinary uses, propagated by offsets. In some regions ("long-season areas"), the offsets are usually planted in autumn (September or October in the Northern Hemisphere).[9] In some other regions, the suggested planting time for the principal crop is early spring (typically in February or the beginning of March in the Northern Hemisphere).

In planting, the tops of the bulbs should be kept a little above ground, and the soil surrounding the bulbs is often drawn away when the roots have taken hold. They come to maturity in summer, although fresh shallots can now be found year-round in supermarkets. Shallots should not be planted on ground recently manured.

In Africa, shallots are grown in the area around Anloga in southeastern Ghana.

Shallots suffer damage from leek moth larvae, which mine into the leaves or bulbs of the plant.