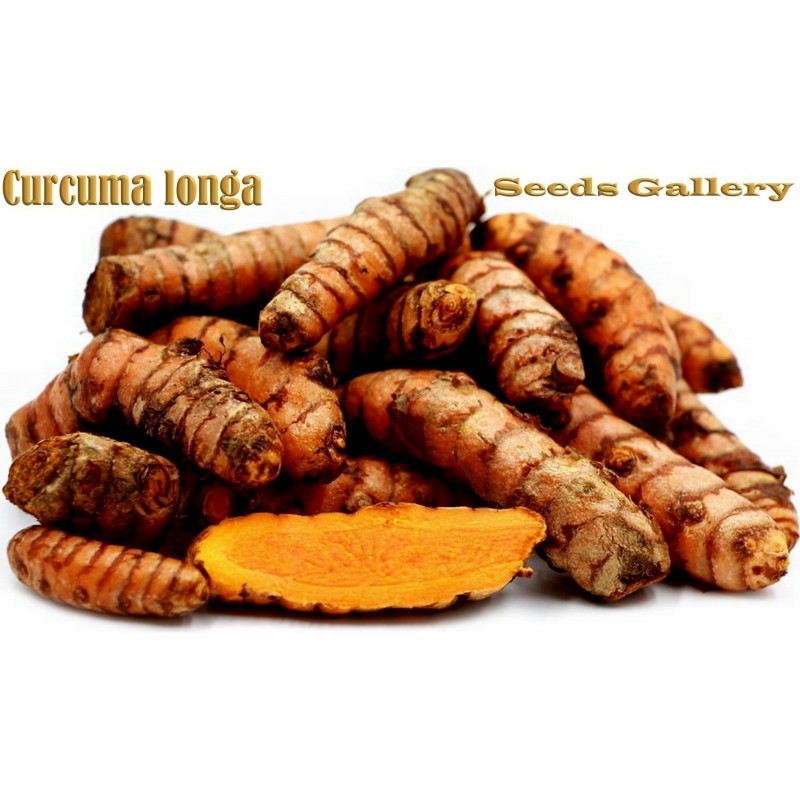 Price for package of 10 Rhizomes.

Turmeric (Curcuma longa) (/ˈtɜːrmərɪk/) is a rhizomatous herbaceous perennial plant of the ginger family, Zingiberaceae.[3] It is native to the Indian subcontinent

Price for package of 10 Rhizomes.

Turmeric (Curcuma longa) (/ˈtɜːrmərɪk/) is a rhizomatous herbaceous perennial plant of the ginger family, Zingiberaceae.[3] It is native to the Indian subcontinent and Southeast Asia, and requires temperatures between 20 and 30 °C (68–86 °F) and a considerable amount of annual rainfall to thrive. Plants are gathered annually for their rhizomes and propagated from some of those rhizomes in the following season.

When not used fresh, the rhizomes are boiled in water for about 30–45 minutes and then dried in hot ovens, after which they are ground into a deep-orange-yellow powder[4]commonly used as a coloring and flavoring agent in many Asian cuisines, especially for curries, as well as for dyeing. Turmeric powder has a warm, bitter, pepper-like flavor and earthy, mustard-like aroma.[5][6]

Although long used in Ayurvedic medicine to treat various diseases, there is little high-quality clinical evidence for use of turmeric or its main constituent, curcumin, as a therapy.[7][8]

Turmeric has been used in Asia for thousands of years and is a major part of Ayurveda, Siddha medicine, Unani, and traditional Chinese medicine.[9] It was first used as a dye, and then later for its medicinal properties.[10]

The origin of the name is uncertain. It possibly derives from Middle English or Early Modern English as turmeryte or tarmaret. It may be of Latin origin, terra merita ("meritorious earth").[11] The name of the genus, Curcuma, is derived from the Sanskrit kuṅkuma, referring to both turmeric and saffron, used in India since ancient times.[12] 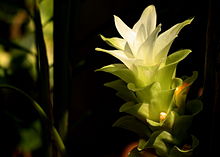 At the top of the inflorescence, stem bracts are present on which no flowers occur; these are white to green and sometimes, tinged reddish-purple, and the upper ends are tapered.[14]

The hermaphrodite flowers are zygomorphic and threefold. The three 0.8 to 1.2 cm (0.3–0.5 in) long sepals are fused, white, have fluffy hairs and the three calyx teeth are unequal. The three bright-yellow petals are fused into a corolla tube up to 3 cm (1.2 in) long. The three corolla lobes have a length of 1.0 to 1.5 cm (0.39–0.59 in) and are triangular with soft-spiny upper ends. While the average corolla lobe is larger than the two lateral, only the median stamen of the inner circle is fertile. The dust bag is spurred at its base. All other stamens are converted to staminodes. The outer staminodes are shorter than the labellum. The labellum is yellowish, with a yellow ribbon in its center and it is obovate, with a length from 1.2 to 2.0 cm (0.47–0.79 in). Three carpels are under a constant, trilobed ovary adherent, which is sparsely hairy. The fruit capsule opens with three compartments.[15][16][17]

In East Asia, the flowering time is usually in August. Terminally on the false stem is a 12 to 20 cm (4.7–7.9 in) long inflorescence stem containing many flowers. The bracts are light green and ovate to oblong with a blunt upper end with a length of 3 to 5 cm (1.2–2.0 in).

Phytochemical components of turmeric include diarylheptanoids, which occur from numerous curcuminoids, such as curcumin, demethoxycurcumin, and bisdemethoxycurcumin.[7]Curcumin constitutes 3.14% (on average) of powdered turmeric, having variations in content among the species of Curcuma longa.[18] Some 34 essential oils are present in turmeric, among which turmerone, germacrone, atlantone, and zingiberene are major constituents.[19][20][21]

Turmeric grows wild in the forests of South and Southeast Asia where it is collected for use in Indian traditional medicine (also called Siddha or Ayurveda).[7] From clinical research, there is no high-quality evidence that turmeric has medicinal properties.[7] 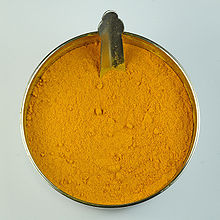 Curry using turmeric, referred to as haldi ki Sabji, a dish from India 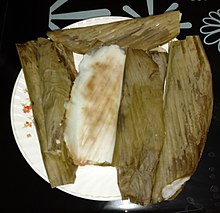 Turmeric is one of the key ingredients in many Asian dishes, imparting a mustard-like, earthy aroma and pungent, slightly bitter flavor to foods.[5][6] Turmeric is used mostly in savory dishes, but also is used in some sweet dishes, such as the cake sfouf. In India, turmeric plant leaf is used to prepare special sweet dishes, Patoleo, by layering rice flour and coconut-jaggery mixture on the leaf, then closing and steaming it in a special utensil (chondrõ).[22] Most turmeric is used in the form of rhizome powder to impart a golden yellow color.[5][6] It is used in many products such as canned beverages, baked products, dairy products, ice cream, yogurt, yellow cakes, orange juice, biscuits, popcorn color, cereals, sauces, and gelatin. It is a principal ingredient in curry powders.[5] Although typically used in its dried, powdered form, turmeric also is used fresh, like ginger. It has numerous uses in East Asian recipes, such as pickle that contains large chunks of soft turmeric, made from fresh turmeric.

Turmeric is used widely as a spice in South Asian and Middle Eastern cooking. Various Iranian khoresh dishes are started using onions caramelized in oil and turmeric, followed by other ingredients. The Moroccan spice mix ras el hanout typically includes turmeric. In South Africa, turmeric is used to give boiled white rice a golden color, known as geelrys(yellow rice) traditionally served with bobotie. In Vietnamese cuisine, turmeric powder is used to color and enhance the flavors of certain dishes, such as bánh xèo, bánh khọt, and mi quang. The staple Cambodian curry paste, kroeung, used in many dishes including Amok, typically contains fresh turmeric. In Indonesia, turmeric leaves are used for Minang or Padang curry base of Sumatra, such as rendang, sate padang, and many other varieties. In Thailand, fresh turmeric rhizomes are used widely in many dishes, in particular in the southern Thai cuisine, such as yellow curry and turmeric soup. Turmeric is used in a hot drink called the "turmeric latte" or "golden milk" made with non-dairy milks, such as coconut milk.[23]

Turmeric makes a poor fabric dye, as it is not very light fast, but is commonly used in Indian clothing, such as saris and Buddhist monks's robes.[6] Turmeric (coded as E100, when used as a food additive),[24] is used to protect food products from sunlight. The oleoresin is used for oil-containing products. A curcumin and polysorbate solution or curcumin powder dissolved in alcohol is used for water-containing products. Over-coloring, such as in pickles, relishes, and mustard, is sometimes used to compensate for fading.

In combination with annatto (E160b), turmeric has been used to color cheeses, yogurt, dry mixes, salad dressings, winter butter, and margarine. Turmeric also is used to give a yellow color to some prepared mustards, canned chicken broths, and other foods (often as a much cheaper replacement for saffron).[25]

Turmeric paper, also called curcuma paper or in German literature, Curcumapapier, is paper steeped in a tincture of turmeric and allowed to dry. It is used in chemical analysis as an indicator for acidity and alkalinity.[26] The paper is yellow in acidic and neutral solutions and turns brown to reddish-brown in alkaline solutions, with transition between pH of 7.4 and 9.2.[27] 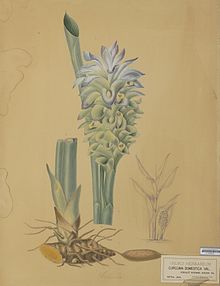 Curcuma domestica Valeton, a drawing by A. Bernecker around 1860

In Ayurvedic and Siddha practices, turmeric has been used as an attempted treatment for a variety of internal disorders, such as indigestion, throat infections, common colds, or liver ailments, as well as topically, to cleanse wounds or treat skin sores.[7][8]

In Eastern India, the plant is used as one of the nine components of navapatrika along with young plantain or banana plant, taro leaves, barley (jayanti), wood apple (bilva), pomegranate (darimba), asoka, manaka or manakochu, and rice paddy. The Navapatrika worship is an important part of Durga festival rituals.[28]

Haldi ceremony (called Gaye holud in Bengal) (literally "yellow on the body") is a ceremony observed during Hindu and South Asian Muslim wedding celebrations in many parts of India, including Bengal, Punjab, Maharashtra, and Gujarat, and in Pakistan.[29]

In Tamil Nadu and Andhra Pradesh, as a part of the Tamil–Telugu marriage ritual, dried turmeric tuber tied with string is used to create a Thali necklace, the equivalent of marriage rings in western cultures. In western and coastal India, during weddings of the Marathi and Konkani people, Kannada Brahmins turmeric tubers are tied with strings by the couple to their wrists during a ceremony, Kankanabandhana.[30]

Friedrich Ratzel reported in The History of Mankind during 1896, that in Micronesia, turmeric powder was applied for embellishment of body, clothing, utensils, and ceremonial uses.[31]

As turmeric and other spices are commonly sold by weight, the potential exists for powders of toxic, cheaper agents with a similar color to be added, such as lead(II,IV) oxide, giving turmeric an orange-red color instead of its native gold-yellow.[32] Another common adulterant in turmeric, metanil yellow (also known as acid yellow 36), is considered an illegal dye for use in foods by the British Food Standards Agency.[33]

Claims that curcumin in turmeric may help to reduce inflammation have not been supported by strong studies.[7][8]

Turmeric or its principal constituent, curcumin, has been studied in numerous clinical trials for various human diseases and conditions, but the conclusions have either been uncertain or negative.[7][34][35]