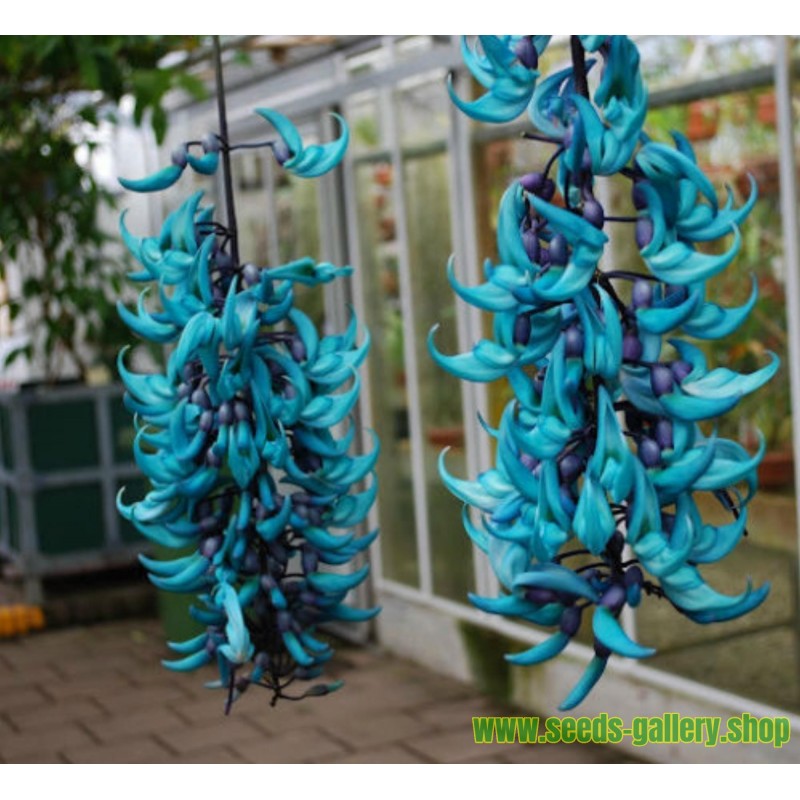 Strongylodon macrobotrys, commonly known as jade vine, emerald vine or turquoise jade vine, is a species of leguminous perennial liana (woody vine), a native of the tropical forests of the Philippines, with

Strongylodon macrobotrys, commonly known as jade vine, emerald vine or turquoise jade vine, is a species of leguminous perennial liana (woody vine), a native of the tropical forests of the Philippines, with stems that can reach up to 18 m in length. Its local name is "tayabak". A member of the Fabaceae (the pea and bean family), it is closely related to beans such as kidney bean and runner bean. Strongylodon macrobotrys is pollinated by birds and bats.

The pale green foliage consists of three leaflets. The claw-shaped flowers are carried in pendent trusses or pseudoracemes of 75 or more flowers and can reach as much as 3 m long.[4] The turquoise flower color is similar to some forms of the minerals turquoise and jade, varying from blue-green to mint green.[citation needed] The short, oblong, fleshy seedpods are up to 15 cm long and contain up to 12 seeds.

The plant grows beside streams in damp forests, or in ravines.[4] The inflorescences are only produced by mature vines. Each individual bloom resembles a stout-bodied butterfly with folded wings, they have evolved certain modifications to allow them to be pollinated by a species of bat that hangs upside down on the inflorescence to drink its nectar.[4] The flowers are also visited by a species of wasp,[citation needed] and are home to a species of butterflies.

There are several other species of Strongylodon, but the superficially similar red jade vine, Mucuna bennettii, is a species belonging to a different genus, Mucuna. It seems to be endemic to the Philippines and is usually found in forests. Propagation has always been difficult. It is considered an endangered species due to the destruction of its habitat and the decrease of its natural pollinators. There seems to be a method of marcotting through mature woody stems. It is best planted in ground near a water source, but not inundated. The vine entwines itself through the trunk and branches of trees and the leaves spread over the canopy. The flowers hang like clusters of grapes.

The characteristic flower coloration has been shown to be an example of copigmentation, a result of the presence of malvin (an anthocyanin) and saponarin (a flavone glucoside) in the ratio 1:9. Under the alkaline conditions (pH 7.9) found in the sap of the epidermal cells, this combination produced a pink pigmentation; the pH of the colorless inner floral tissue was found to be lower, at pH 5.6. Experiments showed that saponarin produced a strong yellow colouring in slightly alkaline conditions, resulting in the greenish tone of the flower.

Strongylodon macrobotrys is not frost-tolerant; it needs a minimum temperature of 15 °C (59 °F).[2] It is prized in tropical and subtropical gardens for its showy flowers which are a highly unusual colour, unlike that of almost any other plant. It is usually grown over a pergola or other tall support to display the spectacular cascading flower trusses which are produced generously once the vine is mature (after 2 years or more, depending on pruning regime). Curiously, on a large plant, the pale-coloured blooms can be difficult to see in strong sunlight and could be overlooked if not for the fallen blooms below the vine. Fallen blooms change color as they dry out, from mint green to blue-green to purple.

In South Africa the jade vine is mainly restricted to the warm humid strip of coastal Natal but grows in a few frost-free spots inland.

In colder latitudes the plant must be grown in a large glasshouse or conservatory, such as the famous examples grown at Kew Gardens, Cambridge University Botanic Garden[5] and the Eden Project in the UK. In cultivation the plant flowers in early spring. In the USA a jade vine can be found at the Naples Botanical Garden, Longwood Gardens, Franklin Park Conservatory, The New York Botanical Gardens and Nicholas Conservatory and Gardens. In Florida, it is at the Fairchild Tropical Botanic Garden and in Hawaii at the Hawaii Tropical Botanical Garden.