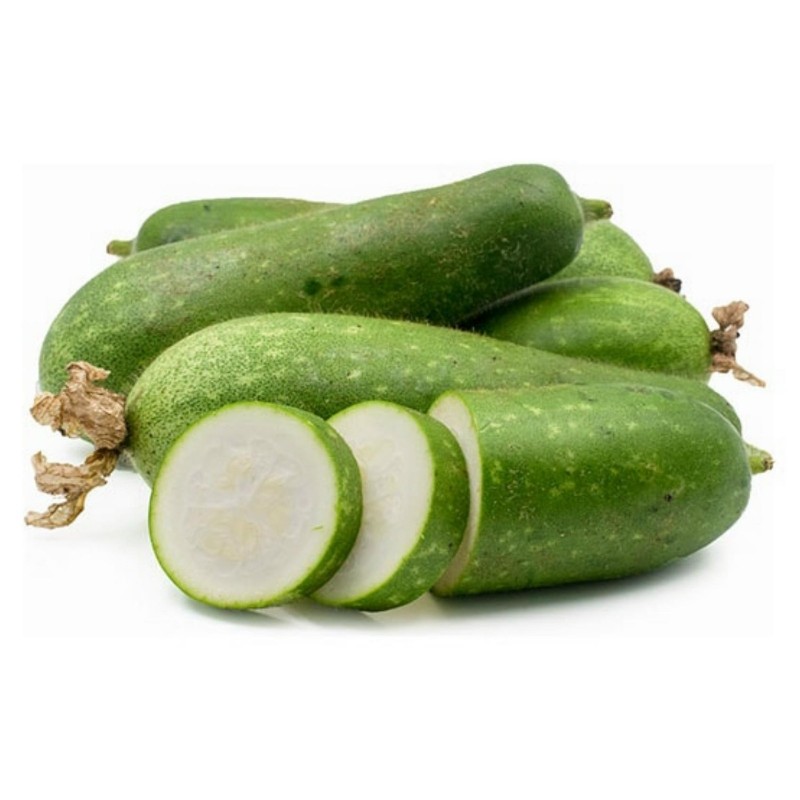 It is the only member of the genus Benincasa. The fruit is fuzzy when young. The immature melon has thick white flesh that is sweet when eaten. By maturity, the fruit loses its hairs and develops a waxy coating, giving rise to the name wax gourd, and providing a long shelf life. The melon may grow as large as 80 cm in length. It has yellow flowers and broad leaves. The taste is rather bland.

It is native to South Asia and Southeast Asia. The wax gourd is widely grown throughout Asia, including Java and Japan, the places where it is thought to have originated.

The name “winter melon” that is sometimes given to this plant is based on the Chinese name dōngguā (冬瓜), however, the character 瓜 (guā) can also mean “gourd” or “squash”. It is likely that the name “melon” is given because this gourd is sometimes candied or made into a sweet tea; see the Uses section below.

It is grown in well-drained loam and sandy soils, in warm mild climates, but will not tolerate frosts. The crops are grown in riverbeds or furrows, and needs constant irrigation during the growing season.

The wax gourd requires very warm weather to grow but can be stored for many months much like winter squash. Ash gourds of the Indian subcontinent have a white coating with rough texture (hence the name ash gourd, literally, in some vernaculars). South East Asian varieties have a smooth waxy texture. It is one of the few vegetables available during winter in areas of deciduous vegetation, hence its Chinese name literally means 'winter gourd'. The Wax Gourd can typically be stored for 12 months. In India, the wax gourd is recognized for its medicinal properties in the Ayurvedic system of medicine.[8] It is also has significance in spiritual traditions of India and Yoga, where it is identified as a great source of Prana.

In Vietnamese cuisine, it is called bí đao, which is usually used to make soup or stew.[11] When cooked with pork short ribs, the resulting soup is traditionally thought to help produce more milk for breastfeeding mothers.

In Chinese cuisine the gourds are used in stir fry or usually combined with pork or pork/beef bones to make winter gourd soup, often served in the scooped out gourd, carved by scraping off the waxy coating. It is also chopped and candied[12][unreliable source?] as wintermelon candy (táng dōng guā) to be commonly eaten at New Year festivals, or as filling for Sweetheart cake (lǎopó bǐng). It has also been used as the base filling in Chinese and Taiwanese mooncakes for the Moon Festival.

In the Philippines it is candied (referred to plainly as kundol) and is used as a pastry filling for bakpia (hopia in the Philippines). It is also an ingredient in some savory soups (sabaw) and stir-fries (guisado).

In Indian cuisine this gourd is traditionally used to prepare a wide variety of dishes. In northern India it is used to prepare a candy called petha. In South Indian cuisine, it is traditionally used to make a variety of curries, including a stew made with a yogurt base.[13] The juice of raw ash gourd(Maipawl) is used by the Mizo community of North-East India as a natural remedy to treat mild to severe dysentery. In north India, particularly in middle Himalayas, it is paired with pulses such as moong which when squashed along with winter gourd results in the making of a dish locally called bari. When dried in the cool winter sunlight it becomes somewhat hard and is used as a curry dish and eaten along with rice or chapati. This practice is done in Himalayas for quite a long time as people in mountains depend upon nature to help them survive harsh winters. This bari is a great source of iron and vitamins and eaten diversely in the mountains.

In Andhra Pradesh, it is called "boodidi gummidikaya" (Telugu language). It is used to make stews, stir fry and vadialu. Vadialu (plural; vadiam is singular) are made by chopping the gourd in small pieces and mixing with yogurt and spices, then sun-drying. To eat, vadiams are deep fried in oil and eaten as an accompaniment to rice and sambar (dish) or lentil stews.

In Kerala, the plant is called Kumbalam (കുമ്പളം) and the fruit is called Kumbalanga (കുമ്പളങ്ങ) or Kooshmandam (കൂശ്മാണ്ടം). It is traditionally used to offer 'Guruthi' (ഗുരുതി) instead of 'Kuruti' (കുരുതി) among Malayali Brahmins. It means, instead of offering someone's life in the pier, an ash gourd is cut into two as a symbolic performance in lieu human sacrifice.

In the Gujarat, is called kolu (કોળુ).

In Nepal, where it is called Kubhindo, it is cooked as a vegetable when young, but the ripe gourds are usually popular in making preserves or crystallized candied sweet known as "murabba" or "petha".[14][unreliable source?]

Occasionally, it is used to produce a fruit drink with a very distinctive taste. It is usually sweetened with caramelized sugar. In Southeast Asia, the drink is widely marketed as wax gourd tea or wax gourd punch.

The shoots, tendrils, and leaves of the plant may also be eaten as greens.