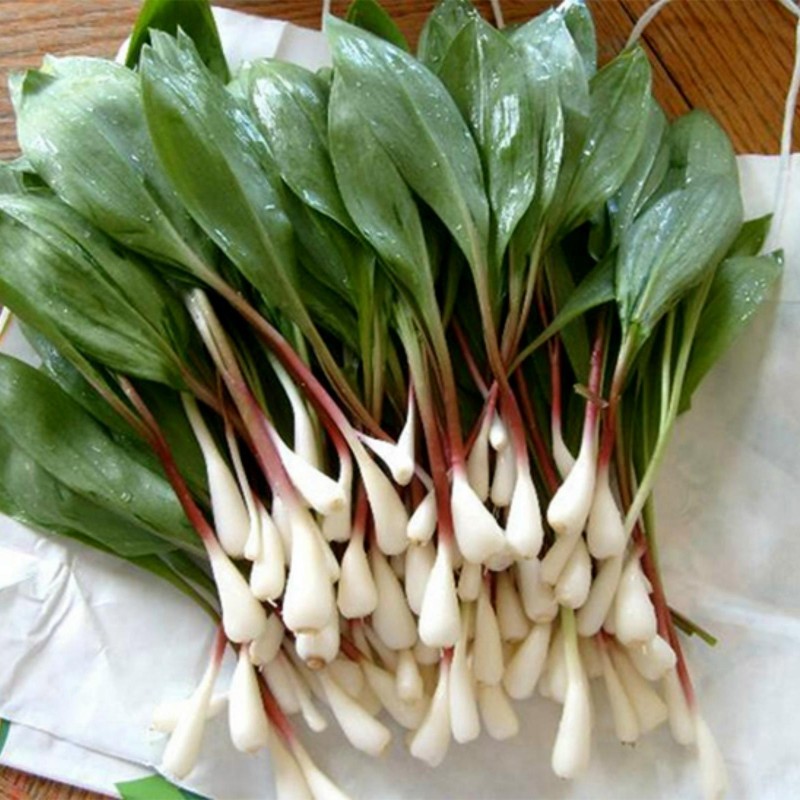 Allium ursinum – known as ramsons, buckrams, wild garlic, broad-leaved garlic, wood garlic, bear leek, or bear's garlic – is a wild relative of chives native to Europe and Asia. The Latin name is due to the brown bear's taste for the bulbs and its habit of digging up the ground to get at them, they are also a favourite of wild boar. In Europe, where ramsons are popularly harvested from the wild, similarity to poisonous plants such as lily of the valley or Colchicum autumnale regularly leads to cases of poisoning.

Allium ursinum is a bulbous, perennial herbaceous monocot, that reproduces primarily by seed. The narrow bulbs are formed from a single leaf base and produce bright green entire, elliptical leaves up to 25 cm long x 7 cm wide with a petiole up to 20 cm long. The inflorescence is an umbel of six to 20 white flowers only, lacking the bulbils produced by some other Allium species such as Allium vineale (crow garlic) and Allium oleraceum (field garlic). :394 :902 The flowers are star-like with six white tepals, about 16–20 mm in diameter, with stamens shorter than the perianth.

It flowers in the British Isles from April to June, :394 starting before deciduous trees leaf in the spring. The flower stem is triangular in cross-section and the leaves are broadly lanceolate similar to those of the lily of the valley (Convallaria majalis).

It is native to temperate regions of Europe, from Britain east to the Caucasus. It is common in much of the lowland British Isles with the exception of the far north of Scotland, Orkney, Shetland, and the Channel Islands.

A. ursinum is widespread across most of Europe. It grows in deciduous woodlands with moist soils, preferring slightly acidic conditions. In the British Isles, colonies are frequently associated with bluebells (Hyacinthoides non-scripta), especially in ancient woodland. It is considered to be an ancient woodland indicator species

The leaves of A. ursinum are edible; they can be used as salad, herb, boiled as a vegetable, in soup, or as an ingredient for a sauce that may be a substitute for pesto in lieu of basil. The stems are preserved by salting and eaten as a salad in Russia. A variety of Cornish Yarg cheese has a rind coated in wild garlic leaves. The bulbs and flowers are also edible. It is used for preparing herbed cheese, a Van speciality in Turkey.

The leaves are also used as fodder. Cows that have fed on ramsons give milk that tastes slightly of garlic, and butter made from this milk used to be very popular in 19th-century Switzerland.

Sow in late winter/late spring and late summer/autumn. The seeds need moist loamy soil with a damp shady environment. Sow either in situ or in a cold frame. It takes 200 seeds per square meter.

Wild Garlic sets seed profusely and germinates well. Plants should be large enough for planting out by the third year.

Scatter the seed on bare soil under trees. Lightly roll the soil but do not rake over. Seeds can be sown at a rate of up to 200 seeds per square meter.