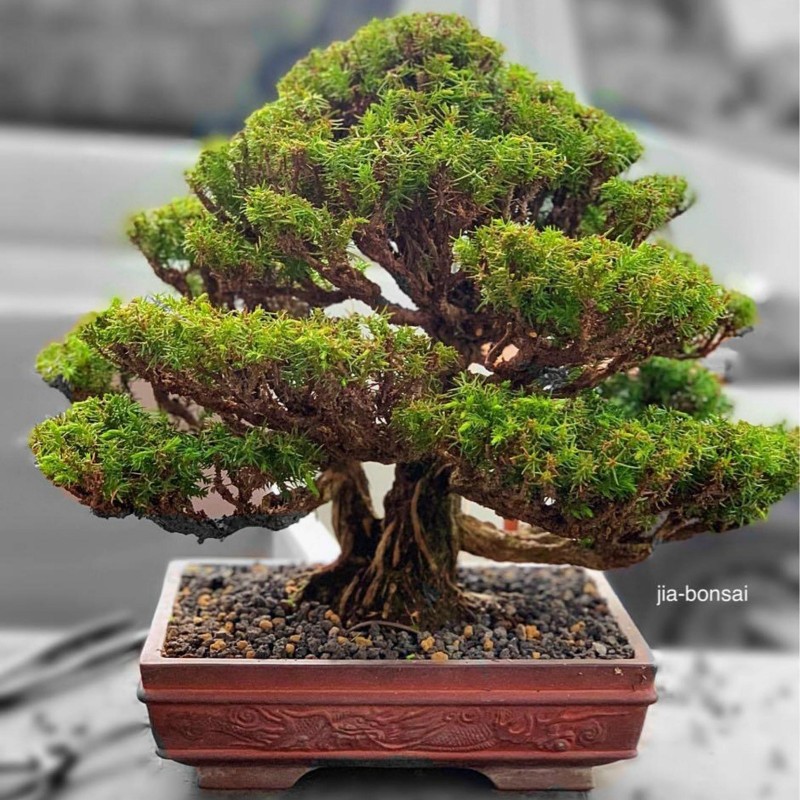 A popular plant for Bonsai, evergreen with needle leaves and slightly pendulous branches. It is fast growing and fairly easy to train.  Cryptomeria is a monotypic genus of conifer in the cypress family

A popular plant for Bonsai, evergreen with needle leaves and slightly pendulous branches. It is fast growing and fairly easy to train.  Cryptomeria is a monotypic genus of conifer in the cypress family Cupressaceae, formerly belonging to the family Taxodiaceae. It includes only one species, Cryptomeria japonica (syn. Cupressus japonica L.f.). It is endemic to Japan, where it is known as Sugi (Japanese: 杉). The tree is often called Japanese cedar in English, though the tree is not related to the true cedars (Cedrus).
It is a very large evergreen tree, reaching up to 70 m (230 ft) tall and 4 m (13 ft) trunk diameter, with red-brown bark which peels in vertical strips. The leaves are arranged spirally, needle-like, 0.5–1 cm (0.20–0.39 in) long; and the seed cones globular, 1–2 cm (0.39–0.79 in) diameter with about 20–40 scales. It is superficially similar to the related Giant Sequoia (Sequoiadendron giganteum), from which it can be differentiated by the longer leaves (under 0.5 cm in the Giant Sequoia) and smaller cones (4–6 cm in the Giant Sequoia), and the harder bark on the trunk (thick, soft and spongy in Giant Sequoia).
Sugi has been so long-cultivated in China that it is thought by some to be native there. Forms selected for ornament and timber production long ago in China have been described as a distinct varietyCryptomeria japonica var. sinensis (or even a distinct species, Cryptomeria fortunei), but they do not differ from the full range of variation found in the wild in Japan, and there is no definite evidence the species ever occurred wild in China. Genetic analysis of the most famous Chinese population ofCryptomeria japonica var. sinensis in Tianmu Mountain, containing trees estimated to be nearly 1000 years old, supports the hypothesis that the population originates from an introduction.
Cryptomeria grow in forests on deep, well-drained soils subject to warm, moist conditions, and it is fast-growing under these conditions. It is intolerant of poor soils and cold, drier climates.[4]
Cryptomeria is used as a food plant by the larvae of some moths of the genus Endoclita including E. auratus, E. punctimargo and E. undulifer.
Sugi (and Hinoki) pollen is a major cause of hay fever in Japan.
Sugi is the national tree of Japan, commonly planted around temples and shrines, with many hugely impressive trees planted centuries ago. Sargent (1894; The Forest Flora of Japan) recorded the instance of a daimyō (feudal lord) who was too poor to donate a stone lantern at the funeral of the Shogun Tokugawa Ieyasu (1543–1616) at Nikkō Tōshō-gū, but requested instead to be allowed to plant an avenue of Sugi, "that future visitors might be protected from the heat of the sun". The offer was accepted; the avenue, which still exists, is over 65 km (40 mi) long, and "has not its equal in stately grandeur".[6]
It is also extensively used in forestry plantations in Japan, China and the Azores islands, and is widely cultivated as an ornamental tree in other temperate areas, including Britain, Europe, North America and eastern Himalaya regions of Nepal and India. In the hills of Darjeeling and Sikkim, it is called dhuppi and the tall trees yield a light, soft wood that is extensively used for making planking for houses.
One very popular ornamental form is the cultivar "Elegans", which is notable for retaining juvenile foliage throughout its life, instead of developing normal adult foliage when one year old (see the picture with different shoots). It makes a small, shrubby tree 5–10m tall. There are numerous dwarf cultivars that are widely used in rock gardens and for bonsai, including 'tansu', 'koshyi', 'little diamond', 'yokohama' and 'kilmacurragh.'
The following cultivars have gained the Royal Horticultural Society's Award of Garden Merit:-
The wood is scented, reddish-pink in colour, lightweight but strong, waterproof and resistant to decay. It is favoured in Japan for all types of construction work as well as interior panelling, etc. In Darjeeling district and Sikkim in India, where it is one of the most widely growing trees, Cryptomeria japonica is called Dhuppi and is favoured for its light wood, extensively used in house building.
Its introduction in the Azores islands to be used commercially, resulted in the destruction of much of the original, now threatened, native laurel forest which affected an entire complex environment threatening many other species such as the priolo.
T 15 (2 S)
92 Elemek