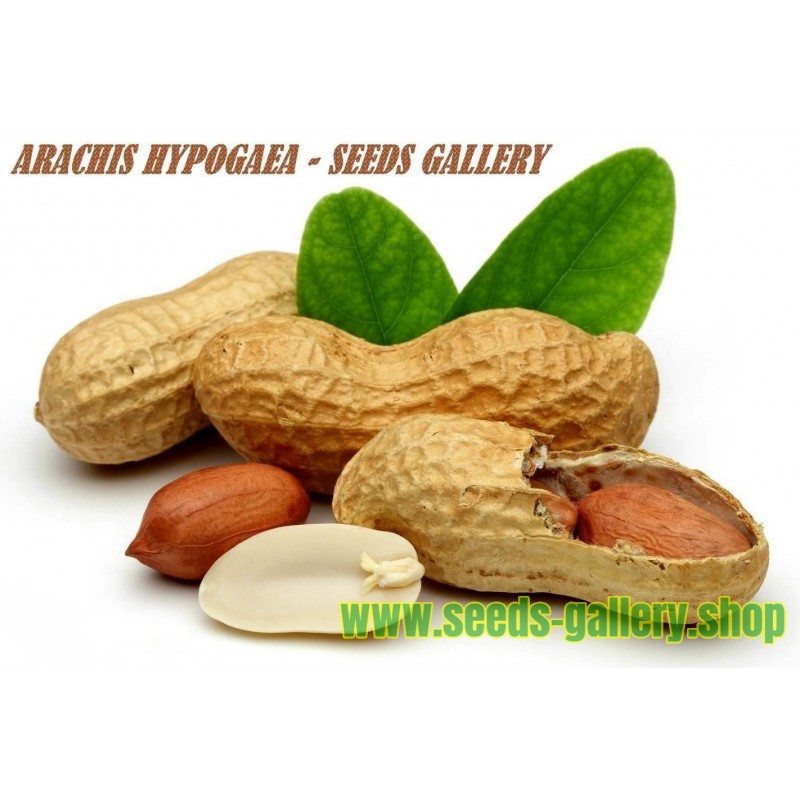 The peanut, or groundnut (Arachis hypogaea), is a species in the legume or "bean" family (Fabaceae). The peanut was probably first domesticated and cultivated in the valleys of Paraguay. It is an annual

The peanut, or groundnut (Arachis hypogaea), is a species in the legume or "bean" family (Fabaceae). The peanut was probably first domesticated and cultivated in the valleys of Paraguay.[1] It is an annual herbaceous plant growing 30 to 50 cm (1.0 to 1.6 ft) tall. The leaves are opposite, pinnate with four leaflets (two opposite pairs; no terminal leaflet), each leaflet is 1 to 7 cm (⅜ to 2¾ in) long and 1 to 3 cm (⅜ to 1 inch) broad.

The flowers are a typical peaflower in shape, 2 to 4 cm (0.8 to 1.6 in) (¾ to 1½ in) across, yellow with reddish veining. Hypogaea means "under the earth"; after pollination, the flower stalk elongates causing it to bend until the ovary touches the ground. Continued stalk growth then pushes the ovary underground where the mature fruit develops into a legume pod, the peanut – a classical example of geocarpy. Pods are 3 to 7 cm (1.2 to 2.8 in) long, containing 1 to 4 seeds.[2]

Peanuts are known by many other local names such as earthnuts, ground nuts, goober peas, monkey nuts, pygmy nuts and pig nuts.[3] Despite its name and appearance, the peanut is not a nut, but rather a legume.

The orange-veined, yellow-petaled, pea-like flower of the Arachis hypogaea is borne in axillary clusters above ground. Following self-pollination, the flowers fade and wither. The stalk at the base of the ovary, called the pedicel, elongates rapidly, and turns downward to bury the fruits several inches in the ground, where they complete their development. The entire plant, including most of the roots, is removed from the soil during harvesting.[8] The fruits have wrinkled shells that are constricted between pairs of the one to four (usually two) seeds per pod.

Peanuts grow best in light, sandy loam soil. They require five months of warm weather, and an annual rainfall of 500 to 1,000 mm (20 to 39 in) or the equivalent in irrigation water.[9]

The pods ripen 120 to 150 days after the seeds are planted. If the crop is harvested too early, the pods will be unripe. If they are harvested late, the pods will snap off at the stalk, and will remain in the soil.[8] They need an acidic soil to grow preferably with 5.9-7 pH.

Peanuts are particularly susceptible to contamination during growth and storage. Poor storage of peanuts can lead to an infection by the mold fungus Aspergillus flavus, releasing the toxic and highly carcinogenic substance aflatoxin. The aflatoxin-producing molds exist throughout the peanut growing areas and may produce aflatoxin in peanuts when conditions are favorable to fungal growth.

Harvesting occurs in two stages[citation needed]: In mechanized systems, a machine is used to cut off the main root of the peanut plant by cutting through the soil just below the level of the peanut pods. The machine lifts the "bush" from the ground and shakes it, then inverts the bush, leaving the plant upside down on the ground to keep the peanuts out of the soil. This allows the peanuts to dry slowly to a bit less than a third of their original moisture level over a period of three to four days. Traditionally, peanuts were pulled and inverted by hand.

After the peanuts have dried sufficiently, they are threshed, removing the peanut pods from the rest of the bush.

Peanuts have many uses. They can be eaten raw, used in recipes, made into solvents and oils, medicines, textile materials, and peanut butter, as well as many other uses. Popular confections made from peanuts include salted peanuts, peanut butter (sandwiches, peanut candy bars, peanut butter cookies, and cups), peanut brittle, and shelled nuts (plain/roasted). Salted peanuts are usually roasted in oil and packed in retail-size plastic bags or hermetically sealed cans. Dry roasted salted peanuts are also marketed in significant quantities. Peanuts are often a major ingredient in mixed nuts because of their relative cost compared to Brazil nuts, cashews, walnuts, and so on. Although peanut butter has been a tradition on camping trips and the like because of its high protein content and because it resists spoiling for long periods of time, the primary use of peanut butter is in the home. Large quantities are also used in the commercial manufacture of sandwiches, candy, and bakery products. Boiled peanuts are a preparation of raw, unshelled green peanuts boiled in brine and often eaten as a snack. More recently, fried peanut recipes have emerged – allowing both shell and nut to be eaten. Peanuts are also used in a wide variety of other areas, such as cosmetics, nitroglycerin, plastics, dyes and paints.

Peanut flour is lower in fat than peanut butter, and is popular with chefs because its high protein content makes it suitable as a flavor enhancer[citation needed]. Peanut flour is used as a gluten-free solution.

Boiled peanuts are a popular snack in the southern United States, as well as in India, China and West Africa.

Dry peanuts can be roasted in the shell in a home oven if spread out one layer deep in a pan and baked at a temperature of 350°F or 177°C for 18–20 minutes.

Peanuts are used in many sauces for South American meat dishes, especially rabbit. Peanuts are common in Peruvian cuisine, which marries native and European ingredients. For instance, roasted peanuts and hot peppers, both native to South America, appear with roasted onions, garlic, and oil—all of European origin—in a smooth sauce poured over boiled potatoes, a dish well known in the city Arequipa and called papas con ocopa. Another example is a fricassee combining a similar mixture with sautéed seafood or boiled and shredded chicken. These dishes are generally known as ajíes, meaning "hot peppers", such as ají de pollo and ají de mariscos. (Seafood ajíes may omit peanuts.)

Likewise, during Colonial times, the Spanish in Peru used peanuts to replace nuts unavailable in Peru but used extensively in Spanish cuisine, such as almonds, pine nuts, and other nuts, typically ground or as paste and mixed with rice, meats, and vegetables for dishes such as rice pilaf.

Crunchy coated peanuts, called kabukim in Hebrew, are a popular snack in Israel. Kabukim are commonly sold by weight at corner stores where fresh nuts and seeds are sold, though they are also available packaged. The coating typically consists of flour, salt, starch, lecithin, and sometimes sesame seeds. The origin of the name is obscure.(It may be derived from kabuk which means nutshell or husk in Turkish.) An additional variety of crunchy coated peanuts popular in Israel is "American peanuts". The coating of this variety is thinner, but harder to crack.

Another popular Israeli peanut snack, Bamba puffs, is similar in shape to Cheez Doodles, but are made of corn and flavored with peanut butter.

Peanuts are also widely used in Southeast Asian cuisine, particularly Indonesia, where they are typically made into a spicy sauce. Peanuts originally came to Indonesia from the Philippines, where the legume came from Mexico in times of Spanish colonization.

Common Indonesian peanut-based dishes include gado-gado, pecel, karedok and ketoprak, all vegetable salads mixed with peanut sauce, and the peanut-based sauce for satay.

In the Indian subcontinent, peanuts are known as a light snack by themselves, usually roasted and salted (sometimes with the addition of chilli powder), and often sold roasted in pod, or boiled with salt. They are also made into little dessert or sweet snack pieces by processing with refined sugar and jaggery. Indian cuisine uses roasted, crushed peanuts to give a crunchy body to salads; they are added whole (without pods) to leafy vegetable stews for the same reason. Another use of peanut oil as cooking oil. Most Indians use mustard, sunflower, and peanut oil for cooking. Peanuts are not native to India. They are thought to have come to India from Philippines. Notably, the name of this nut in northern parts of Tamil Nadu is 'மணிலாக் கொட்டை'- slang மல்லாக் கொட்டை- (Manila-k-kottai) means nut from Manila, the capital city of Philippines.

Peanuts grow well in southern Mali and adjacent regions of the Ivory Coast, Burkina Faso, Ghana, Nigeria and Senegal; peanuts are similar in both agricultural and culinary qualities to the Bambara groundnut native to the region, and West Africans have adopted the crop as a staple. Peanut sauce, prepared with onions, garlic, peanut butter/paste, and vegetables such as carrots, cabbage, and cauliflower, can be vegetarian (the peanuts supplying ample protein) or prepared with meat, usually chicken.

Peanut powder is an important ingredient in the spicy coating for kebabs in Nigeria and Ghana.

Peanuts are a common ingredient of several types of relishes (dishes which accompany nshima) eaten by the tribes in Malawi and in the eastern part of Zambia, and these dishes are now common throughout both countries. Thick peanut butter sauces are also made in Uganda to go with rice and other starchy foods. Across East Africa, roasted peanuts (often in cones of newspaper) are a popular snack sold in the street.

In the US, peanuts are used in candies, cakes, cookies, and other sweets. They are also enjoyed roasted and salted. Peanut butter is one of the most popular peanut-based foods in the US, and for four hundred years, recipes for peanut soup have been present in the South, Virginia in particular. In some southern portions of the US, peanuts are boiled for several hours until soft and moist. Peanuts are also deep-fried, shell and all.

Peanuts are used to help fight malnutrition. Plumpy Nut, MANA Nutrition,[14] and Medika Mamba[15] are high-protein, high-energy and high-nutrient peanut-based pastes developed to be used as a therapeutic food to aid in famine relief. The World Health Organization, UNICEF, Project Peanut Butter and Doctors Without Borders have used these products to help save malnourished children in developing countries.

Peanuts can be used like other legumes and grains to make a lactose-free milk-like beverage, peanut milk. Peanut plant tops are used for hay.

Low-grade or culled peanuts not suitable for the edible market are used in the production of peanut oil for manufacturing.[citation needed] The protein cake (oilcake meal) residue from oil processing is used as an animal feed and as a soil fertilizer. Low-grade peanuts are also widely sold as a garden bird feed.

Peanuts have a variety of industrial end uses. Paint, varnish, lubricating oil, leather dressings, furniture polish, insecticides, and nitroglycerin are made from peanut oil. Soap is made from saponified oil, and many cosmetics contain peanut oil and its derivatives. The protein portion is used in the manufacture of some textile fibers. Peanut shells are used in the manufacture of plastic, wallboard, abrasives, fuel, cellulose (used in rayon and paper) and mucilage (glue). Rudolf Diesel ran some of the first engines that bear his name on peanut oil[16] and it is still seen as a potentially useful fuel.

How to Sow Peanut

Peanuts need a long, hot growing season to fully mature. Do not plant in areas that do not have at least 4-5 months of frost-free weather. Shell the seeds before sowing. In loose, well-drained soil in a sunny location, sow seeds directly outdoors after the last frost. Plant in light, deeply dug and prepared alkaline soil. Create a furrow 2" deep and sow seeds 4-6" apart, being careful not to damage the tender seeds. Space rows 3' apart. Seeds germinate in 10-15 days.