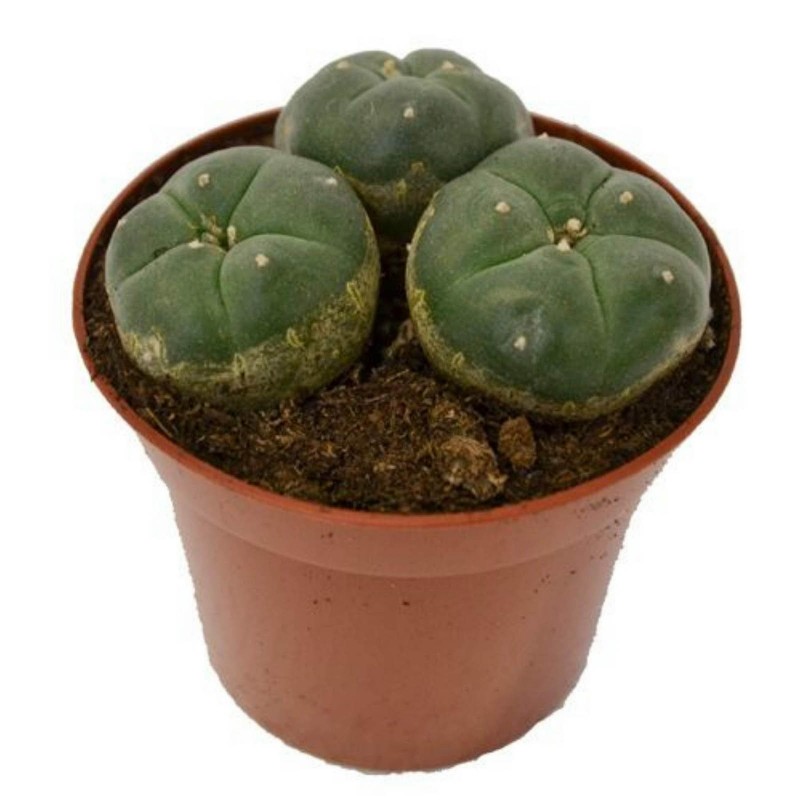 Lophophora williamsii (/loʊˈfɒfərə wɪliˈæmsiaɪ/) or peyote (/pəˈjoʊti/) is a small, spineless cactus with psychoactive alkaloids, particularly mescaline. Peyote is a Spanish word derived from the Nahuatl,

Lophophora williamsii (/loʊˈfɒfərə wɪliˈæmsiaɪ/) or peyote (/pəˈjoʊti/) is a small, spineless cactus with psychoactive alkaloids, particularly mescaline. Peyote is a Spanish word derived from the Nahuatl, or Aztec, peyōtl [ˈpejoːt͡ɬ], meaning "glisten" or "glistening". Other sources translate the Nahuatl word as "Divine Messenger".[3][4] Peyote is native to Mexico and southwestern Texas. It is found primarily in the Chihuahuan Desert and in the states of Coahuila, Nuevo León, Tamaulipas, and San Luis Potosí among scrub. It flowers from March to May, and sometimes as late as September. The flowers are pink, with thigmotactic anthers (like Opuntia).

Known for its psychoactive properties when ingested, peyote is used worldwide,[citation needed] having a long history of ritualistic and medicinal use by indigenous North Americans. Peyote contains the hallucinogen mescaline.

The various species of the genus Lophophora grow low to the ground and they often form groups with numerous, crowded shoots. The blue-green, yellow-green or sometimes reddish-green shoots are mostly flattened spheres with sunken shoot tips. They can reach heights of from 2 to 7 centimeters (0.79 to 2.76 in) and diameters of 4 to 12 cm (1.6 to 4.7 in). There are often significant, vertical ribs consisting of low and rounded or hump-like bumps. From the cusp areoles arises a tuft of soft, yellowish or whitish woolly hairs. Spines are absent. Flowers are pink or white to slightly yellowish, sometimes reddish. They open during the day, are from 1 to 2.4 cm long, and reach a diameter from 1 to 2.2 cm.

The cactus produces flowers sporadically; these are followed by small edible pink fruit. The club-shaped to elongated, fleshy fruits are bare and more or less rosy colored. At maturity, they are brownish-white and dry. The fruits do not burst open on their own and they are between 1.5 and 2 cm long. They contain black, pear-shaped seeds that are 1 to 1.5 mm long and 1 mm wide. The seeds require hot and humid conditions to germinate. Peyote contains a large spectrum of phenethylamine alkaloids. The principal one is mescaline for which the content of Lophophora williamsii is about 0.4% fresh[5] (undried) and 3–6% dried.

Peyote is extremely slow growing. Cultivated specimens grow considerably faster, sometimes taking less than three years to go from seedling to mature flowering adult. More rapid growth can be achieved by grafting peyote onto mature San Pedro root stock. The top of the above-ground part of the cactus, the crown, consists of disc-shaped buttons. These are cut above the roots and sometimes dried. When done properly, the top of the root forms a callus and the root does not rot.< When poor harvesting techniques are used, however, the entire plant dies. Currently in South Texas, peyote grows naturally but has been over-harvested, to the point that the state has listed it as an endangered species.[citation needed] The buttons are generally chewed, or boiled in water to produce a psychoactive tea. Peyote is extremely bitter and most people are nauseated before they feel the onset of the psychoactive effects.

When used for its psychoactive properties, common doses for pure mescaline range from roughly 200 to 400 mg. This translates to a dose of roughly 10 to 20 g of dried peyote buttons of average potency; however, potency varies considerably between samples, making it difficult to measure doses accurately without first extracting the mescaline. The effects last about 10 to 12 hours.[10] Peyote is reported to trigger rich visual or auditory effects (see synesthesia).

In addition to psychoactive use, some Native American tribes use the plant in the belief it may have curative properties. They employ peyote to treat such varied ailments as toothache, pain in childbirth, fever, breast pain, skin diseases, rheumatism, diabetes, colds, and blindness. Peyote also contains an alkaloid called peyocactin. It is now called hordenine. Peyote poisoning has been a concern in California.

In 2005 researchers used radiocarbon dating and alkaloid analysis to study two specimens of peyote buttons found in archaeological digs from a site called Shumla Cave No. 5 on the Rio Grande in Texas. The results dated the specimens to between 3780 and 3660 BCE. Alkaloid extraction yielded approximately 2% of the alkaloids including mescaline in both samples. This indicates that native North Americans were likely to have used peyote since at least five-and-a-half thousand years ago.[16]

Specimens from a burial cave in west central Coahuila, Mexico have been similarly analyzed and dated to 810 to 1070 CE.

From earliest recorded time, peyote has been used by indigenous peoples, such as the Huichol[18] of northern Mexico and by various Native American tribes, native to or relocated to the Southern Plains states of present-day Oklahoma and Texas. Its usage was also recorded among various Southwestern Athabaskan-language tribal groups. The Tonkawa, the Mescalero, and Lipan Apache were the source or first practitioners of peyote religion in the regions north of present-day Mexico.[19] They were also the principal group to introduce peyote to newly arrived migrants, such as the Comanche and Kiowa from the Northern Plains. The religious, ceremonial, and healing uses of peyote may date back over 2,000 years.

Under the auspices of what came to be known as the Native American Church, in the 19th century, American Indians in more widespread regions to the north began to use peyote in religious practices, as part of a revival of native spirituality. Its members refer to peyote as "the sacred medicine", and use it to combat spiritual, physical, and other social ills. Concerned about the drug's psychoactive effects, between the 1880s and 1930s, U.S. authorities attempted to ban Native American religious rituals involving peyote, including the Ghost Dance. Today the Native American Church is one among several religious organizations to use peyote as part of its religious practice. Some users claim the drug connects them to God.

Traditional Navajo belief or ceremonial practice did not mention the use of peyote before its introduction by the neighboring Utes. The Navajo Nation now has the most members of the Native American Church.

Dr. John Raleigh Briggs (1851–1907) was the first to draw scientific attention of the Western scientific world to peyote.[22] Louis Lewin described Anhalonium lewinii in 1888.[23] Arthur Heffter conducted self experiments on its effects in 1897.[24] Similarly, Norwegian ethnographer Carl Sofus Lumholtz[25] studied and wrote about the use of peyote among the Indians of Mexico. Lumholtz also reported that, lacking other intoxicants, Texas Rangers captured by Union forces during the American Civil War soaked peyote buttons in water and became "intoxicated with the liquid".

The US Dispensatory lists peyote under the name Anhalonium, and states it can be used in various preparations for neurasthenia, hysteria and asthma.

A study published in 2007 found no evidence of long-term cognitive problems related to peyote use in Native American Church ceremonies, but researchers stressed their results may not apply to those who use peyote in other contexts.[27] A four-year large-scale study of Navajo who regularly ingested peyote found only one case where peyote was associated with a psychotic break in an otherwise healthy person; other psychotic episodes were attributed to peyote use in conjunction with pre-existing substance abuse or mental health problems.[28] Later research found that those with pre-existing mental health issues are more likely to have adverse reactions to peyote.[29] Peyote use does not appear to be associated with hallucinogen persisting perception disorder (a.k.a. "flashbacks") after religious use.[30] Peyote does not seem to be associated with physical dependence, but some users may experience psychological dependence.

Peyote can have strong emetic effects, and one death has been attributed to esophageal bleeding caused by vomiting after peyote ingestion in a Native American patient with a history of alcohol abuse.[32] Peyote is also known to cause potentially serious variations in heart rate, blood pressure, breathing, and pupillary dilation.

Research into the huichol natives of central-western Mexico, who have taken peyote regularly for an estimated 1,500 years or more, found no evidence of chromosome damage in either men or women.