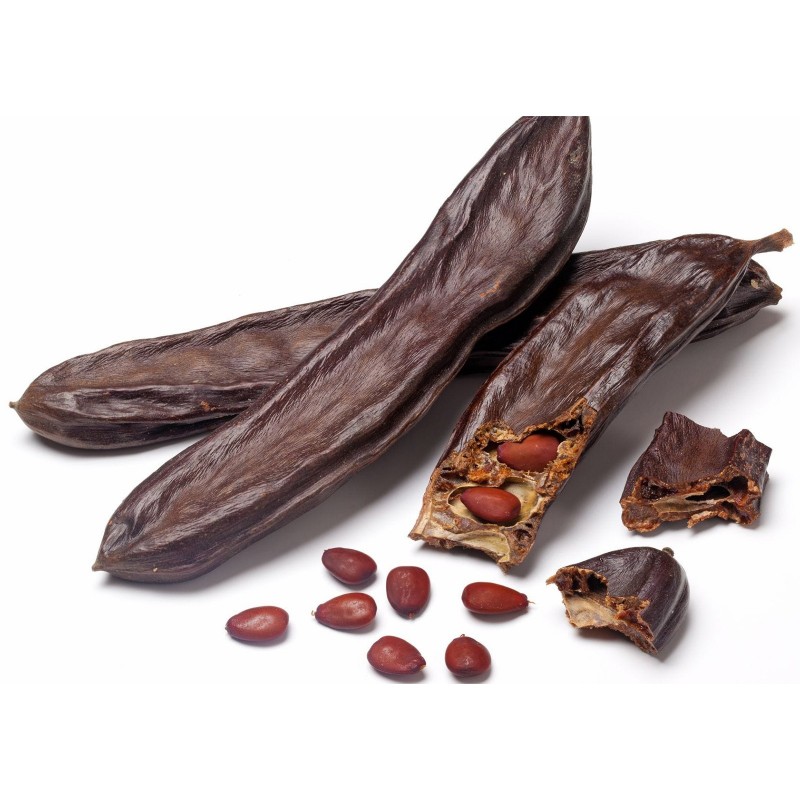 Ceratonia siliqua, commonly known as the carob tree and St John's-bread, is a species of flowering evergreen shrub or tree in the pea family, Fabaceae. It is widely cultivated for its edible legumes, and as

Ceratonia siliqua, commonly known as the carob tree and St John's-bread, is a species of flowering evergreen shrub or tree in the pea family, Fabaceae. It is widely cultivated for its edible legumes, and as an ornamental tree in gardens. The seed pod may be crushed and used as ersatz chocolate.

It is native to the Mediterranean region including Southern Europe, Northern Africa, the larger Mediterranean islands; to the Levant and Middle-East of Western Asia into Iran; and to the Canary Islands and Macaronesia.

The Ceratonia siliqua tree grows up to 15 metres (49 ft) tall. The crown is broad and semi-spherical, supported by a thick trunk with brown rough bark and sturdy branches. Leaves are 10 to 20 centimetres (3.9 to 7.9 in) long, alternate, pinnate, and may or may not have a terminal leaflet. It is frost-tolerant.

Most carob trees are dioecious. The trees blossom in autumn. The flowers are small and numerous, spirally arranged along the inflorescence axis in catkin-like racemes borne on spurs from old wood and even on the trunk (cauliflory); they are pollinated by both wind and insects. Male flowers produce a characteristic odour, resembling semen.

The fruit is a pod that can be elongated, compressed, straight or curved, and thickened at the sutures. The pods take a full year to develop and ripen. The ripe pods eventually fall to the ground and are eaten by various mammals, thereby dispersing the seed.

Carob consumed by humans is the dried (and sometimes roasted) pod, and not the 'nuts' or seeds. Carob is mildly sweet and is used in powdered, chip, or syrup form as an ingredient in cakes and cookies, and as a substitute for chocolate.

Chocolate contains theobromine, which is poisonous to some mammals, but carob does not, and is used to make chocolate-flavored treats for dogs.

The seeds, also known as locust beans, are used as animal feed, and are the source of locust bean gum — a food thickening agent. Crushed pods may be used to make a beverage; compote, liqueur, and syrup are made from carob in Turkey, Malta, Portugal, Spain and Sicily. Several studies suggest that carob may aid in treating diarrhea in infants. In Libya, carob syrup (there called rub) is used as a complement to Asida. The so-called carob syrup made in Peru is actually from the fruit of the Prosopis nigra tree.

Carob is rich in sugars - Sucrose = 531g ± 93 g/kg dry weight for cultivated varieties and 437 ± 77 g/kg in wild type varieties. Fructose and glucose levels do not differ between cultivated and wild type carob.