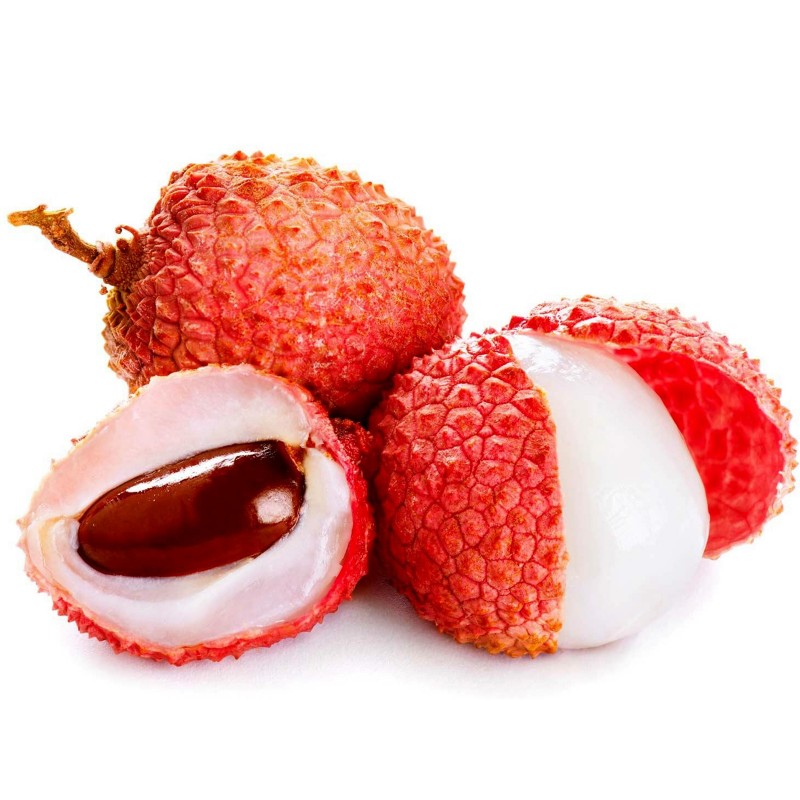 The lychee (Litchi chinensis) is the sole member of the genus Litchi in the soapberry family, Sapindaceae. It is a tropical and subtropical fruit tree native to southern China, Taiwan, Bangladesh, and Southeast Asia

The lychee (Litchi chinensis) is the sole member of the genus Litchi in the soapberry family, Sapindaceae. It is a tropical and subtropical fruit tree native to southern China, Taiwan, Bangladesh, and Southeast Asia, and now cultivated in many parts of the world. The fresh fruit has a "delicate, whitish pulp" with a floral smell and a fragrant, sweet flavor. Since this perfume-like flavor is lost in the process of canning, the fruit is usually eaten fresh.

An evergreen tree reaching 10–28 metres tall, the lychee bears fleshy fruits that are up to 5 cm (2.0 in) long and 4 cm (1.6 in) wide. The outside of the fruit is covered by a pink-red, roughly textured rind that is inedible but easily removed to expose a layer of sweet, translucent white flesh. Lychees are eaten in many different dessert dishes, and are especially popular in China, throughout Southeast Asia, along with South Asia and India.

The lychee is cultivated in China, Taiwan, Thailand, Vietnam, Japan, India, Bangladesh, Pakistan and Nepal. China is the main producer, followed by India.

The lychee has a history and cultivation going back as far as 2000 BC according to records in China. Cultivation began in the area of southern China, Malaysia, and Vietnam. Wild trees still grow in parts of southern China and on Hainan Island. There are many stories of the fruit's use as a delicacy in the Chinese Imperial Court. It was first described and introduced to the west in 1782.

Litchi chinensis is an evergreen tree that is frequently less than 19 m (62 ft) tall, sometimes reaching more than 15 m (49 ft). The bark is grey-black, the branches a brownish-red. Leaves are 10 to 25 cm (3.9 to 9.8 in) or longer, with leaflets in 2-4 pairs.[6] Litchee have a similar foliage to the Lauraceae family likely due to convergent evolution. They are adapted by developing leaves that repel water, and are called laurophyll or lauroid leaves. Flowers grow on a terminal inflorescence with many panicles on the current season's growth. The panicles grow in clusters of ten or more, reaching 10 to 40 cm (3.9 to 16 in) or longer, holding hundreds of small white, yellow, or green flowers that are distinctively fragrant.

Fruits mature in 80–112 days, depending on climate, location, and cultivar. Fruits reach up to 5 cm (2.0 in) long and 4 cm (1.6 in) wide, varying in shape from round, to ovoid, to heart-shaped. The thin, tough inedible skin is green when immature, ripening to red or pink-red, and is smooth or covered with small sharp protuberances. The skin turns brown and dry when left out after harvesting. The fleshy, edible portion of the fruit is an aril, surrounding one dark brown inedible seed that is 1 to 3.3 cm (0.39 to 1.3 in) long and .6 to 1.2 cm (0.24 to 0.47 in) wide. Some cultivars produce a high percentage of fruits with shriveled aborted seeds known as 'chicken tongues'. These fruit typically have a higher price, due to having more edible flesh.

Cultivation of lychee began in the region of southern China, Malaysia, and northern Vietnam. Wild trees still grow in rainforest in Guangdong province and on Hainan Island. Unofficial records in China refer to lychee as far back as 2000 BC.[7]

In the 1st century, fresh lychees were in such demand at the Imperial Court that a special courier service with fast horses would bring the fresh fruit from Guangdong. There was great demand for lychee in the Song Dynasty (960-1279), according to Cai Xiang, in his Li chi pu (Treatise on Lychees). It was also the favourite fruit of Emperor Li Longji (Xuanzong)'s favoured concubine Yang Yuhuan (Yang Guifei). The emperor had the fruit delivered at great expense to the capital.[2]

In the Chinese classical work, Shanglin Fu, it is related that the alternate name, meaning leaving its branches, is so-called because once the fruit is picked it deteriorates quickly.

The lychee early attracted attention of European travelers. Juan González de Mendoza in his History of the great and mighty kingdom of China (1585; English translation 1588), based on the reports of Spanish friars who had visited China in the 1570s, highly praises the fruit:[8]

[T]hey haue a kinde of plummes, that they doo call lechias, that are of an exceeding gallant tast, and neuer hurteth any body, although they shoulde eate a great number of them.

The lychee was scientifically described by Pierre Sonnerat (1748–1814) on a return from his travel to China and Southeast Asia. It was then introduced to the Réunion Island in 1764 by Joseph-François Charpentier de Cossigny de Palma. It was later introduced to Madagascar which has become a major producer.

Lychees are extensively grown in China, and also elsewhere in Brazil, South-East Asia, India, Pakistan, Bangladesh, southern Japan, and more recently in California,Jamaica and elsewhere in the Caribbean, Hawaii, Texas, Florida,[9] the wetter areas of eastern Australia and sub-tropical regions of South Africa, Israel and also in the states of Sinaloa and San Luis Potosí (specifically, in La Huasteca) in Mexico. They require a warm subtropical to tropical climate that is cool but also frost-free or with only very slight winter frosts not below -4°C, and with high summer heat, rainfall, and humidity. Growth is best on well-drained, slightly acidic soils rich in organic matter. A wide range of cultivars is available, with early and late maturing forms suited to warmer and cooler climates respectively. They are also grown as an ornamental tree as well as for their fruit.

Lychees are commonly sold fresh in Asian markets, and in recent years, also widely in supermarkets worldwide. The red rind turns dark brown when the fruit is refrigerated, but the taste is not affected. It is also sold canned year-round. The fruit can be dried with the rind intact, at which point the flesh shrinks and darkens.[2] Dried lychee are often called lychee nuts, though, of course, they are not a real nut.

According to folklore, a lychee tree that is not producing much fruit can be girdled, leading to more fruit production.

Seed Germination: Seeds can be sowed 1-2 cm into a loose potting soil (we use coco). Keep between 25-35C and don't allow to fully dry. Too moist, and there could be fungal problems. Normal germination time is 3-10 weeks, but in cooler temperature germinate time takes far longer, and germination rates drop. We experience a 80-90% germ rate with this species.