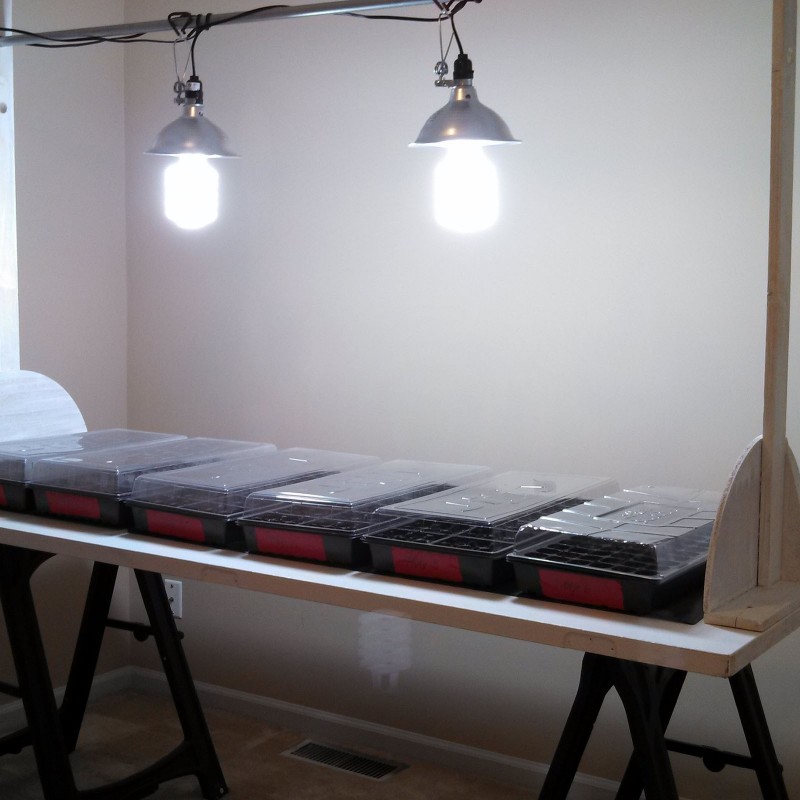 € 0,00
Sowing Seeds that Need Light for Germination
There's a general seed planting rule that says you should plant a seed to a depth that is 3 times its thickness. That means fat bean seeds can be planted 1-3 inches deep and tiny carrot seeds should be barely covered. Most seed packets will take the guess work out of the process and tell you how

There's a general seed planting rule that says you should plant a seed to a depth that is 3 times its thickness. That means fat bean seeds can be planted 1-3 inches deep and tiny carrot seeds should be barely covered. Most seed packets will take the guess work out of the process and tell you how deep to plant the seeds. It's a good idea to follow these recommendations, because a seed that is planted too deeply might not have enough stored energy to push itself above the soil line.

Seeds that Germinate Best if Exposed to Light

Some seeds actually germinate best if they are exposed to light. If these seeds are covered in soil, chances are good they will never sprout. These seeds should only be pressed onto the surface of the soil and kept moist, to germinate. They include:

Seeds that will Germinate with or without Light

Most plants that self-sow in your garden are able to germinate without being covered with soil. However that doesn't necessarily mean they need light. Several plant seeds are indifferent to light exposure. Flowers like alyssum and cosmos will self seed during their current growing season as well as the next one.

Other seeds that will germinate uncovered include:

How to Keep Exposed Seeds Moist

Although they don't require a covering a soil, you will probably get better germination if you follow the recommended planting depth, simply because it will be easier for you to keep them moist and safe from hungry birds.
Being able to sow seeds on the surface of soil makes planting easier, but keeping them moist until germination can be difficult, since they're exposed. If you are growing them in flats or containers, you can cover them lightly with plastic wrap, plastic domes or tuck them inside of plastic bags.
For seeds sown outdoors or if you prefer not to use plastic, another viable option is to cover the seeds with a thin layer of fine vermiculite. Vermiculite is porous enough to let light shine through, while retaining enough water to stay in place and keep the seeds and soil under it moist.
Vermiculite can often be found near seed starting supplies. It's a mica-type material that is heated up and expanded, to increase its water holding. Vermiculite is the small silvery metallic-looking flecks often included in seed starting mixes. The particles soak up water and nutrients and hold them in the mix until the plants are ready to access them.
Look for finely ground horticulture vermiculite. The vermiculite sold in home improvement stores is used in insulation and plaster and does not have the same water absorbing quality.

Germination is the growth of an embryonic plant contained within a seed; it results in the formation of the seedling. The seed of a vascular plant is a small package produced in a fruit or cone after the union of male and female sex cells. All fully developed seeds contain an embryo and, in most plant species some store of food reserves, wrapped in a seed coat. Some plants produce varying numbers of seeds that lack embryos; these are called empty seeds and never germinate. Most seeds go through a period of dormancy where there is no active growth; during this time the seed can be safely transported to a new location and/or survive adverse climate conditions until circumstances are favorable for growth. Dormant seeds are ripe seeds that do not germinate because they are subject to external environmental conditions that prevent the initiation of metabolic processes and cell growth. Under proper conditions, the seed begins to germinate and the embryonic tissues resume growth, developing towards a seedling.

Seed germination depends on both internal and external conditions. The most important external factors include temperature, water, oxygen and sometimes light or darkness. Various plants require different variables for successful seed germination. Often this depends on the individual seed variety and is closely linked to the ecological conditions of a plant's natural habitat. For some seeds, their future germination response is affected by environmental conditions during seed formation; most often these responses are types of seed dormancy.

Most common annual vegetables have optimal germination temperatures between 75-90 F (24-32 C), though many species (e.g.radishes or spinach) can germinate at significantly lower temperatures, as low as 40 F (4 C), thus allowing them to be grown from seed in cooler climates. Suboptimal temperatures lead to lower success rates and longer germination periods.

Scarification mimics natural processes that weaken the seed coat before germination. In nature, some seeds require particular conditions to germinate, such as the heat of a fire (e.g., many Australian native plants), or soaking in a body of water for a long period of time. Others need to be passed through an animal's digestive tract to weaken the seed coat enough to allow the seedling to emerge.

Some live seeds are dormant and need more time, and/or need to be subjected to specific environmental conditions before they will germinate. Seed dormancy can originate in different parts of the seed, for example, within the embryo; in other cases the seed coat is involved. Dormancy breaking often involves changes in membranes, initiated by dormancy-breaking signals. This generally occurs only within hydrated seeds. Factors affecting seed dormancy include the presence of certain plant hormones, notably abscisic acid, which inhibits germination, and gibberellin, which ends seed dormancy. In brewing, barley seeds are treated with gibberellin to ensure uniform seed germination for the production of barley malt.

In some definitions, the appearance of the radicle marks the end of germination and the beginning of "establishment", a period that ends when the seedling has exhausted the food reserves stored in the seed. Germination and establishment as an independent organism are critical phases in the life of a plant when they are the most vulnerable to injury, disease, and water stress. The germination index can be used as an indicator of phytotoxicity in soils. The mortality between dispersal of seeds and completion of establishment can be so high that many species have adapted to produce huge numbers of seeds

In epigeous (or epigeal) germination, the hypocotyl elongates and forms a hook, pulling rather than pushing the cotyledons and apical meristem through the soil. Once it reaches the surface, it straightens and pulls the cotyledons and shoot tip of the growing seedlings into the air. Beans, tamarind, and papaya are examples of plants that germinate this way.

Another way of germination is hypogeous (or hypogeal), where the epicotyl elongates and forms the hook. In this type of germination, the cotyledons stay underground where they eventually decompose. Peas, gram and mango, for example, germinate this way.

In monocot seeds, the embryo's radicle and cotyledon are covered by a coleorhiza and coleoptile, respectively. The coleorhiza is the first part to grow out of the seed, followed by the radicle. The coleoptile is then pushed up through the ground until it reaches the surface. There, it stops elongating and the first leaves emerge.

While not a class of germination, precocious germination refers to seed germination before the fruit has released seed. The seeds of the green apple commonly germinate in this manner.

Another germination event during the life cycle of gymnosperms and flowering plants is the germination of a pollen grain afterpollination. Like seeds, pollen grains are severely dehydrated before being released to facilitate their dispersal from one plant to another. They consist of a protective coat containing several cells (up to 8 in gymnosperms, 2-3 in flowering plants). One of these cells is a tube cell. Once the pollen grain lands on the stigma of a receptive flower (or a female cone in gymnosperms), it takes up water and germinates. Pollen germination is facilitated by hydration on the stigma, as well as by the structure and physiology of the stigma and style. Pollen can also be induced to germinate in vitro (in a petri dish or test tube).

During germination, the tube cell elongates into a pollen tube. In the flower, the pollen tube then grows towards the ovule where it discharges the sperm produced in the pollen grain for fertilization. The germinated pollen grain with its two sperm cells is the mature male microgametophyte of these plants.

Since most plants carry both male and female reproductive organs in their flowers, there is a high risk of self-pollination and thusinbreeding. Some plants use the control of pollen germination as a way to prevent this self-pollination. Germination and growth of the pollen tube involve molecular signaling between stigma and pollen. In self-incompatibility in plants, the stigma of certain plants can molecularly recognize pollen from the same plant and prevent it from germinating.

Germination can also refer to the emergence of cells from resting spores and the growth of sporeling hyphae or thalli from spores infungi, algae and some plants.

Conidia are asexual reproductive (reproduction without the fusing of gametes) spores of fungi which germinate under specific conditions. A variety of cells can be formed from the germinating conidia. The most common are germ tubes which grow and develop into hyphae. Another type of cell is a conidial anastomosis tube (CAT); these differ from germ tubes in that they are thinner, shorter, lack branches, exhibit determinate growth and home toward each other. Each cell is of a tubular shape, but the conidial anastomosis tube forms a bridge that allows fusion between conidia.

In resting spores, germination that involves cracking the thick cell wall of the dormant spore. For example, in zygomycetes the thick-walled zygosporangium cracks open and the zygospore inside gives rise to the emerging sporangiophore. In slime molds, germination refers to the emergence of amoeboid cells from the hardened spore. After cracking the spore coat, further development involves cell division, but not necessarily the development of a multicellular organism (for example in the free-living amoebas of slime molds).