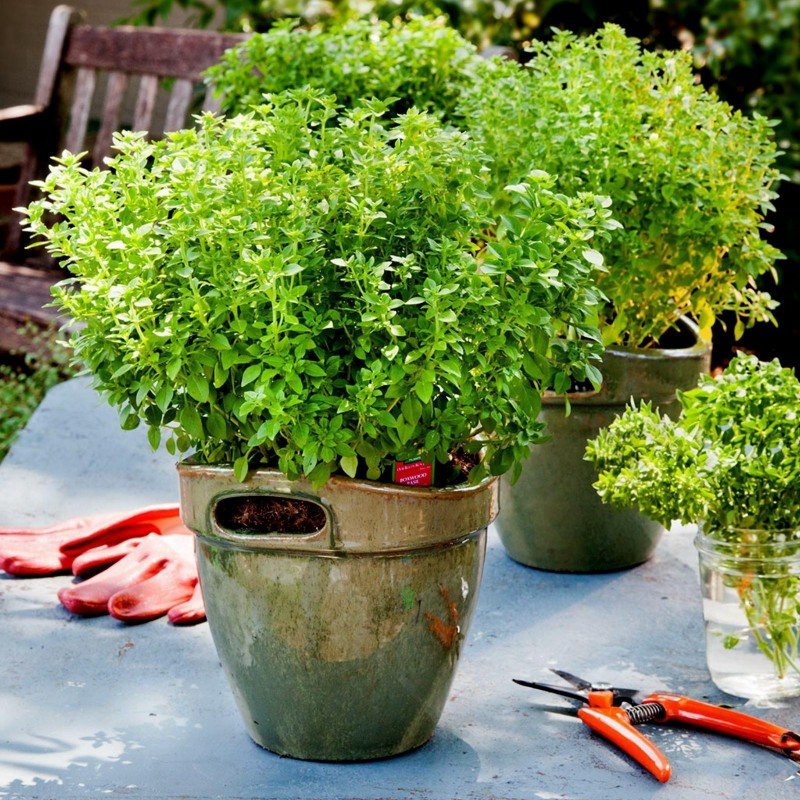 Basil is native to tropical regions from central Africa to Southeast Asia.[3] It is a tender plant, and is used in cuisines worldwide. Depending on the species and cultivar, the leaves may taste somewhat like anise, with a strong, pungent, often sweet smell.

There are many varieties of basil, as well as several related species or hybrids also called basil. The type used commonly as a flavor is typically called sweet basil (or Genovese basil), as opposed to Thai basil (O. basilicum var. thyrsiflora), lemon basil (O. × citriodorum), and holy basil (Ocimum tenuiflorum). While most common varieties of basil are treated as annuals, some are perennial in warm, tropical climates, including holy basil and a cultivar known as "African blue basil".

Basil is an annual, or sometimes perennial, herb used for its leaves. Depending on the variety, plants can reach between 30 cm (0.98 ft) and 150 cm (4.9 ft). Its leaves are richly green and ovate, but otherwise come in a wide variety of sizes and shapes depending on cultivar. Leaf sizes range from 3 cm (1.2 in) to 11 cm (4.3 in) long, and between 1 cm (0.39 in) and 6 cm (2.4 in) wide. Basil grows a thick, central taproot. Its flowers are small and white, and grow from a central inflorescence that emerges from the central stem atop the plant.[citation needed]

The various basils have such different scents because the herb has a number of different essential oils in different proportions for various cultivars.[3] The essential oil from European basil contains high concentrations of linalool and methyl chavicol (estragole), in a ratio of about 3:1.[3][4] Other constituents include: 1,8-cineole, eugenol, and myrcene, among others.[3][5] The clove scent of sweet basil is derived from eugenol.[6] The aroma profile of basil includes 1,8-cineole[7][8] and methyl eugenol.[7][9]

The exact taxonomy of basil is uncertain due to the immense number of cultivars, its ready polymorphy, and frequent cross-pollination (resulting in new hybrids) with other members of the genus Ocimum and within the species. Ocimum basilicum has at least 60 varieties, which further complicates taxonomy.[3]

Most basils are cultivars of sweet basil.

Several other basils, including some other Ocimum species, are grown in many regions of Asia. Most of the Asian basils have a clove-like flavor that is, in general, stronger than the Mediterranean basils. The most notable is the holy basil or tulsi, a revered home-grown plant in India and Nepal.

Lemon basil has a strong lemony smell and flavor very different from those of other varieties because it contains a chemical called citral. It is widely used in Indonesia, where it is called kemangi, served raw together with raw cabbage, green beans, and cucumber as an accompaniment to fried fish or duck. Its flowers, when broken up, are a zesty saladcondiment.

The name "basil" comes from Latin, basilius, and Greek βασιλικόν φυτόν (basilikón phutón), "royal/kingly plant", possibly because the plant was believed to have been used in production of royal perfumes.[15] The Latin name has been confused with basilisk, as it was supposed to be an antidote to the basilisk's venom.[15]

Basil is native to India and other tropical regions stretching from Africa to Southeast Asia, but has now become globalized due to human cultivation.[3]

Most culinary and ornamental basils are cultivars of the species Ocimum basilicum, but other species are also grown and there are many hybrids between species. Traditionally a green plant, some varieties, such as 'Purple Delight' have leaves that appear purple. Basil grows between 30–130 cm (12–51 in) tall, with opposite, light green, silky leaves 3–11 cm (1.2–4.3 in) long and 1–6 cm (0.39–2.36 in) broad. The flowers are small, white in color and arranged in a terminal spike. Unusual among Lamiaceae, the four stamens and the pistil are not pushed under the upper lip of the corolla, but lie over the inferior lip. After entomophilous pollination, the corolla falls off and four round achenes develop inside the bilabiate calyx.

Basil is sensitive to cold, with best growth in hot, dry conditions. It behaves as an annual if there is any chance of a frost. However, due to its popularity, basil is cultivated in many countries around the world. Production areas include countries in the Mediterranean area, those in the temperate zone, and others in subtropical climates.[16]

In Northern Europe, Canada, the northern states of the U.S., and the South Island of New Zealand it will grow best if sown under glass in a peat pot, then planted out in late spring/early summer (when there is little chance of a frost). Additionally, it may be sown in soil once chance of frost is past. It fares best in well-drained, sunny exposure.

Although basil grows best outdoors, it can be grown indoors in a pot and, like most herbs, will do best on a sun-facing windowsill. It should be kept away from extremely cold drafts, and grows best in strong sunlight, therefore a greenhouse or row cover is ideal if available. It can, however, be grown even in a basement, under fluorescent lights.

If its leaves have wilted from lack of water, it will recover if watered thoroughly and placed in a sunny location. Yellow leaves towards the bottom of the plant are an indication that the plant has been stressed; usually this means that it needs less water, or less or more fertilizer.

In sunnier climates such as Southern Europe, the southern states of the U.S., the North Island of New Zealand, and Australia, basil will thrive when planted outside. It also thrives over the summertime in the central and northern United States, but dies out when temperatures reach freezing point. It will grow back the next year if allowed to go to seed. It will need regular watering, but not as much attention as is needed in other climates.

Basil can also be propagated reliably from cuttings with the stems of short cuttings suspended for two weeks or so in water until roots develop.

Once a stem produces flowers, foliage production stops on that stem, the stem becomes woody, and essential oil production declines. To prevent this, a basil-grower may pinch off any flower stems before they are fully mature. Because only the blooming stem is so affected, some stems can be pinched for leaf production, while others are left to bloom for decoration or seeds.

Once the plant is allowed to flower, it may produce seed pods containing small black seeds, which can be saved and planted the following year. Picking the leaves off the plant helps promote growth, largely because the plant responds by converting pairs of leaflets next to the topmost leaves into new stems.

Basil is popularly recommended as a companion plant to the tomato. Common claims are that basil may deter pests or improve tomato flavor. However, in double-blind taste tests, basil did not significantly affect the taste of tomatoes when planted adjacent to them.

Basil suffers from several plant pathogens that can ruin the crop and reduce yield. Fusarium wilt is a soil-borne fungal disease that will quickly kill younger basil plants. Seedlings may be killed by Pythium damping off. A common foliar disease of basil is gray mold caused by Botrytis cinerea; it can cause infections post-harvest and is capable of killing the entire plant. Black spot can be seen on basil foliage and is caused by the fungigenus Colletotrichum. Downy mildew caused by Peronospora belbahrii is a significant disease, as first reported in Italy in 2004.[19] It was reported in the U.S. in 2007 and 2008.

Basil is most commonly used fresh in recipes. In general, it is added at the last moment, as cooking quickly destroys the flavor. The fresh herb can be kept for a short time in plastic bags in the refrigerator, or for a longer period in the freezer, after being blanched quickly in boiling water. The dried herb also loses most of its flavor, and what little flavor remains tastes very different, with a weak coumarin flavor, like hay.[citation needed]

Basil is one of the main ingredients in pesto—a green Italian oil-and-herb sauce.

The most commonly used Mediterranean basil cultivars are "Genovese", "Purple Ruffles", "Mammoth", "Cinnamon", "Lemon", "Globe", and "African Blue". The Chinese also use fresh or dried basils in soups and other foods. In Taiwan, people add fresh basil leaves to thick soups. They also eat fried chicken with deep-fried basil leaves. Basil (most commonly Thai basil) is commonly steeped in cream or milk to create an interesting flavor in ice cream or chocolates (such as truffles). The leaves are not the only part of basil used in culinary applications, the flower buds have a more subtle flavor and they are edible.

When soaked in water, the seeds of several basil varieties become gelatinous, and are used in Asian drinks and desserts such as faluda, sharbat-e-rihan, or hột é.

Research studies of the essential oil showed antifungal and insect-repelling properties,[23] including potential toxicity to mosquitos.[24]

In folk medicine practices, such as those of Ayurveda or traditional Chinese medicine, basil is thought to have therapeutic properties.[25][26]

There are many rituals and beliefs associated with basil. The French sometimes call basil "l'herbe royale" ("royal herb"),[27] while Jewish folklore suggests it adds strength while fasting.[28] In Portugal, dwarf bush basil is traditionally presented in a pot, together with a poem and a paper carnation, to a sweetheart, on the religious holidays of Saint John and Saint Anthony. However, basil represented hatred in ancient Greece, and European lore sometimes claims that basil is a symbol of Satan.[29]

In Europe, basil is placed in the hands of the dead to ensure a safe journey.[32] In India, they place it in the mouth of the dying to ensure they reach God.[33] The ancient Egyptians and ancient Greeks believed it would open the gates of heaven for a person passing on.[34]