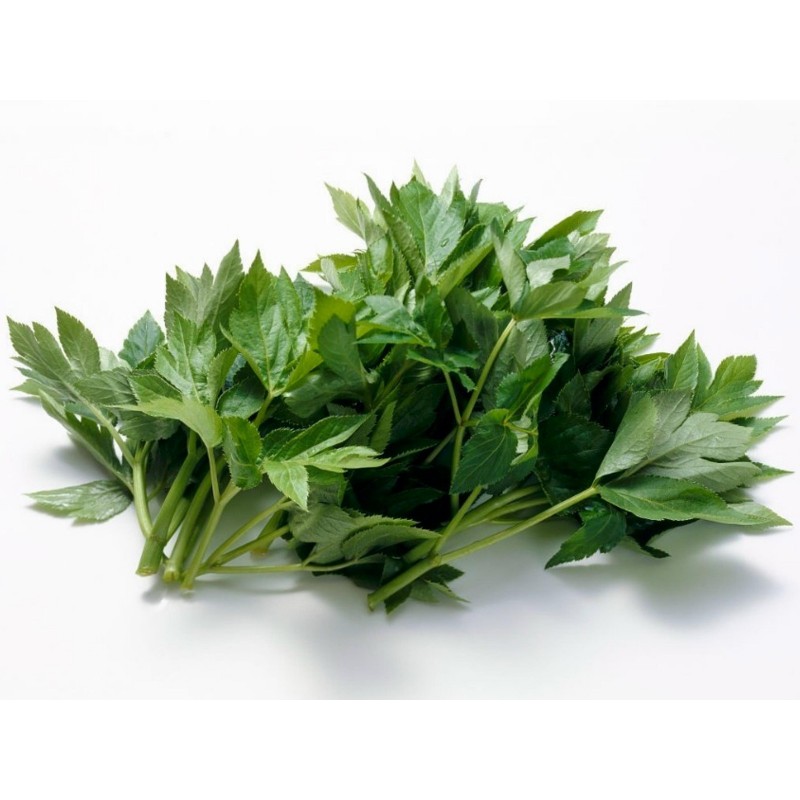 Angelica keiskei Koidzumi, commonly known under the Japanese name of Ashitaba (アシタバ or 明日葉 ashitaba, literally "Tomorrow's Leaf"), is a cold hardy perennial plant from the angelica genus with an

Angelica keiskei Koidzumi, commonly known under the Japanese name of Ashitaba (アシタバ or 明日葉 ashitaba, literally "Tomorrow's Leaf"), is a cold hardy perennial plant from the angelica genus with an average growth height of 50–120 cm. It is endemic to Hachijō-jima, though it is artificially cultivated in Izu Ōshima, Mikura-jima, Nii-jima, To-shima and parts of Honshū as well.

The plant's additional cultivar epithet koidzumi refers to botanist Gen'ichi Koizumi, while its Japanese nomenclature stems from the above-average regenerative capabilities it exhibits after injury. Harvesting a leaf at the break of day often results in a new sprout growing overnight, being visible the following morning.

Traditionally it is seen as a major contributor to the supposedly healthier, extended lives of the local residents, possibly due to the chalconoids that are unique to this species of angelica. At one point in Edo period, the haulm's yellow sap was effectively used in the external treatment of smallpox, which prompted Kaibara Ekken to describe the herb in his Yamato honzō (大和本草), under the name of ashitagusa (鹹草), as "a powerful tonic drug." In folk medicine it is claimed to be diuretic, tonic, to improve digestion, and, when applied topically, to speed wound healing and prevent infection. Also, its nutritive qualities are said to be the factor behind the internal exiles' and their families' never waning stamina in the face of their arduous compulsory labor.

For similar reasons, it very widely serves as pasture for cows, reckoned to improve the quality of milk as well as the yield and to maintain cattle health at the same time. It should be pointed out that most of these claims have yet to be proven in clinical trials, while studies have substantiated the presence of furocoumarins in several of these plants' components. Furanocumarin is an agent known to increase skin sensitivity to sunlight and may cause dermatitis.

Nonetheless, modest conditions for cultivation and fast rate of growth, with optimal temperatures ranging between 12-22 degrees, have led many locals to plant ashitaba in herb gardens, flower pots, and backyards. These days the main use of their stipes, leaves, and taproots is in regional cuisine, where they are prepared as soba, tempura, shōchū, tea, ice cream, pasta etc. The Mikura-jima variety might excel in this regard as it is reputed to be less bitter than others.

Note that ashitaba closely resembles Angelica japonica, but can be distinguished by its blooming period, which lasts from May to October whereas A. japonica's blooming period lasts only between May and July. Another indicator is the characteristic color of its sap.[2] The larvae of the Common Yellow Swallowtail are known to feed frequently on the plant.

A. keiskei has been claimed to exhibit cytotoxic, antidiabetic, antioxidative, anti-inflammatory, antihypertensive, and antimicrobial properties via in vitro studies, but the efficacy of these qualities have yet to be confirmed in vivo.[3] Among current investigations is its potential as a nerve growth factor,[4] as well as potential usefulness in cancer, menopause, and other conditions.[5] Ashitaba may have positive effects on circulation by preventing red blood cells from clumping.

Claims of being a vegetable source of vitamin B12

Although it is often suggested that A. keiskei is a vegetable source of vitamin B12 (cyanocobalamin), recently published, peer-reviewed scientific investigations of pharmacology and phytochemical constituents of interest report nothing that substantiates this claim.[7][8] Traditional methods for measuring vitamin B12 in foods are compromised by contaminants (e.g. soil, bacteria, etc.) that contain detectable concentrations of inactive B12 analogs, which may explain the origin of this belief.[9] More recent studies reveal certain mushrooms and algae as the only naturally occurring sources of B12 outside of the animal kingdom.[10] Of these, only Chlorella has demonstrated the ability to reduce methyl malonic acid (MMA) levels (a product of B12 deficiency) in human subjects.

Soak seeds overnight in cool, non-chlorinated water and then refrigerate the seeds (approximately 40 degrees F) in the moist medium for 3 days.

Note that our recommendation is MOIST, not SODDEN or VERY WET and that we are recommending REFRIGERATION not FREEZING.

After this pretreatment, plant the (still moist) seeds.

Sow on surface, barely cover with soil and press in firmly and keep evenly moist until germination.

Use a greenhouse, shade house or grow lights.

Germination Temperature is around 20C/68F

Germination occurs 30 to 60 days after sowing.

Seedlings are slow-growing and will require about 60 days to transplant.

Once past the seedling stage, the plant is fast growing.

Water every other day.