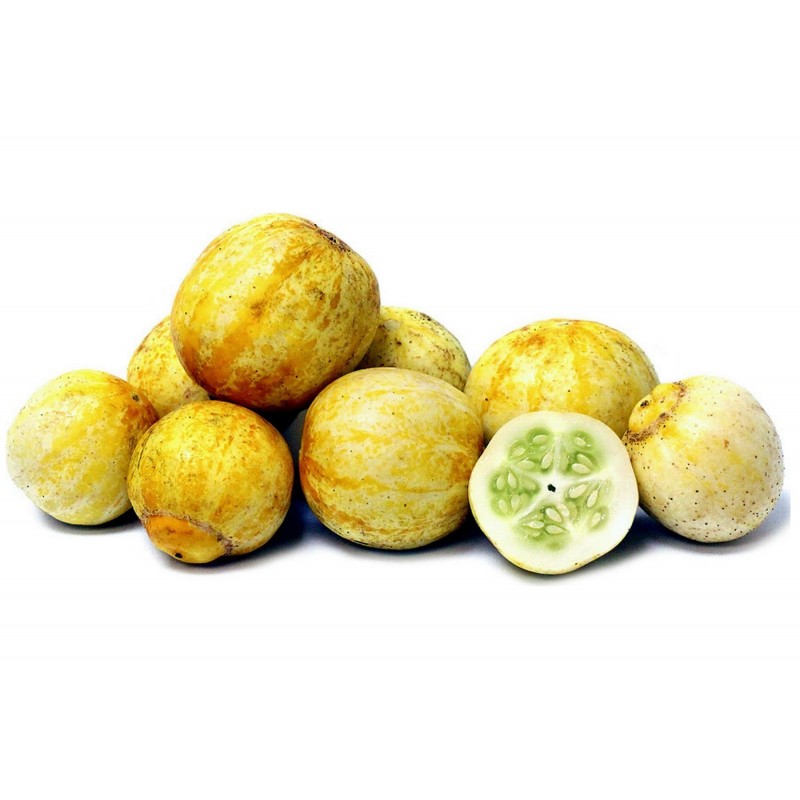 An unusual Heirloom variety producing a profusion of apple-shaped fruits, with lemon-coloured skin and lime green flesh, which is very mild, sweet, and never bitter. Best harvested at lemon

An unusual Heirloom variety producing a profusion of apple-shaped fruits, with lemon-colored skin and lime green flesh, which is very mild, sweet, and never bitter. Best harvested at lemon size. Although outstanding for salads or pickling, chances are (just like us) you will end up eating most of these delectable nuggets out-of-hand like an apple. This is a vigorous plant that should yield a tremendous crop.  70 days.

The cucumber species originates from India. The origin of lemon cucumbers isn't certain, it was introduced to America sometime between 1894 and 1905 but there are Middle-Eastern documents that mention this variety from the 16th century, making its likely origin from around this time in either the Middle-East or India.

Lemon cucumbers are sweet and crisp with no bitterness making them very versatile.  Burpless and thin-skinned.  Great for pickling, juicing, adding fresh to salads, or eating as a healthy and delicious snack.  Don't be fooled, the variety name 'Lemon' refers to the color of the skin of this cucumber, not its taste, it is not lemony in flavor nor particularly sour.

Cucumber 'Lemon' should be trellised for ease of picking and to save space.  Easy to grow, very prolific with fruits maturing quickly.  Fruits need less heat to ripen than most varieties making them a good variety for cooler climates.  Also a good variety for growing in pots and containers.  Avoid watering leaves where possible to reduce disease.  Lemon cucumbers are more resistant to drought than most cucumbers and are resistant to rusts.  Grows best in soil with a pH of around 6.5.