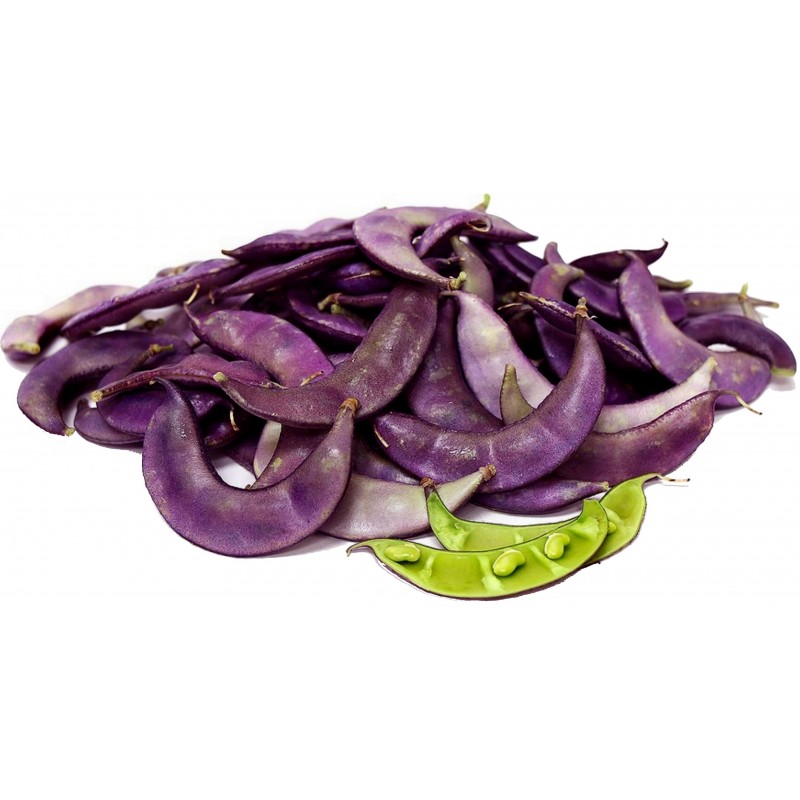 Lablab purpureus is a species of bean in the family Fabaceae. It is native to Africa and it is cultivated throughout the tropics for food. English language common names include hyacinth bean, lablab-bean

Lablab purpureus is a species of bean in the family Fabaceae. It is native to Africa and it is cultivated throughout the tropics for food. English language common names include hyacinth bean, lablab-bean bonavist bean/pea, dolichos bean, seim bean, lablab bean, Egyptian kidney bean, Indian bean, bataw and Australian pea. It is the only species in the monotypic genus Lablab.

The plant is variable due to extensive breeding in cultivation, but in general, they are annual or short-lived perennial vines. The wild species is perennial. The thick stems can reach six meters in length. The leaves are made up of three pointed leaflets each up to 15 centimeters long. They may be hairy on the undersides. The inflorescence is made up of racemes of many flowers. Some cultivars have white flowers, and others may have purplish or blue.[2] The fruit is a legume pod variable in shape, size, and color. It is usually several centimeters long and bright purple to pale green.[7] It contains up to four seeds. The seeds are white, brown, red, or black depending on the cultivar, sometimes with a white hilum. Wild plants have mottled seeds. The seed is about a centimeter long.

The hyacinth bean is an old domesticated pulse and multi-purpose crop. Due to seed availability of one forage cultivar (cv. Rongai), it is often grown as forage for livestock and as an ornamental plant. In addition, it is cited both as a medicinal plant and a poisonous plant.

The fruit and beans are edible if boiled well with several changes of the water. Otherwise, they are toxic due to the presence of cyanogenic glycosides, glycosides that are converted to hydrogen cyanide when consumed. Signs of poisoning include weakness, vomiting, dyspnea, twitching, stupor, and convulsions. It has been shown that there is a wide range of cyanogenic potential among the varieties.

The leaves are eaten raw or cooked like spinach. The flowers can be eaten raw or steamed. The root can be boiled or baked for food. The seeds are used to make tofu and tempeh.

In Bangladesh and West Bengal, the green pods along with the beans, known as Sheem (শিম), are cooked as vegetables or cooked with fish as a curry.

In China, the seeds are known as Bai Bian Dou. They are usually dried and baked before being used in traditional Chinese herbal remedies to strengthen spleen, reduce heat and dampness, and promote appetite.

In Kerala, it is known as Amarakka, Avara or Amara Payar (Malayalam: അമര പയർ ).[17] The beans as well as the bean pods are used in cooking curries. The bean pods are also used (along with spices) for preparing stir-fried dish known as Thoran.

In Maharashtra, dry preparations with green masala is often made out of these green beans (Ghevda varirties - Shravan ghevda (french beans), Bajirao Ghevda, Ghevda, Walwar, Pavta sheng..) mostly found at the end of monsoon during fasting festivals of Shravan month.

In Karnataka, the hyacinth bean is made into curry (avarekalu saaru)(Kannada: ಅವರೆಕಾಳು ಸಾರು), salad (avarekaalu usli), added to upma (avrekaalu uppittu), and as a flavoring to Akki rotti. Sometimes the outer peel of the seed is taken out and the inner soft part is used for a variety of dishes. This form is called hitakubele avarekalu, which means "pressed (hitaku) hyancinth bean, and a curry known as Hitikida Avarekaalu Saaru is made out of this deskinned beans.

In Telangana and Andra Pradesh, the bean pods are cut into small pieces and cooked as spicy curry in Pongal festival season. Sometimes the outer peel of the seed when tender and soaked over night is taken out and the inner soft part is used for a variety of dishes. This form is called pitakapappu,hanupa/anapa, which means "pressed (pitaku) hyancinth bean, and a curry known as Pitikida Anapaginjala Chaaru is made out of this deskinned beans along with bajra bread; it has been a very special delicacy for centuries.

In Kenya, the bean called 'Njahe' is popular among several communities, especially the Kikuyu. Seasons were actually based on it i.e the Season of Njahe (Kīmera kīa njahī). It is thought to encourage lactation and has historically been the main dish for breastfeeding mothers. Beans are boiled and mashed with ripe and/or semi-ripe bananas, giving the dish a sweet taste. Today the production is in decline in eastern Africa. This is partly attributed to the fact that under colonial rule in Kenya, farmers were forced to give up their local bean in order to produce common beans (Phaseolus vulgaris) for export.