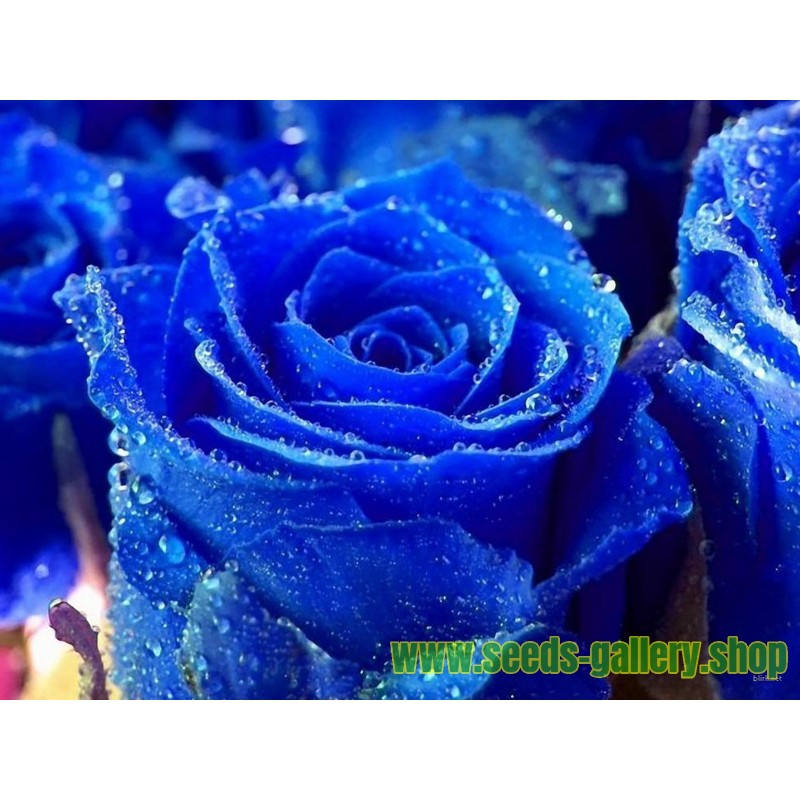 Roses which are light blue in color are sometimes referred to as a lilac or lavender rose. The blue rose meaning and symbolism imply many things such as a statement of love at first sight as well as reaching for the unattainable. Blue roses have an air of mystery to their beauty.

One of the most memorable moments you can have with you loved one is to see their reaction after you order and have delivered them a bouquet of a dozen blue roses. These beautiful flowers will show them how much you care for and adore them. You can find available help in finding the perfect arrangement to convey the blue rose meaning from an online florist.

You don’t often see blue roses delivered but when you do they simply take your breath away. Nothing spells romance better than light or dark blue roses which create a lasting impression for the recipient. You would be hard pressed to find another flower which would have a greater impact than that of sending a blue rose.

The beauty of blue roses has beguiled people for hundreds of years. Nowadays a number of species of blue roses are cultivated, from Old Garden to modern hybrids. These include large, single-bloom flowers and small bushes with many blossoms. The types that have long stems are the most wanted for bouquets, and these carry the most symbolic substance for the blue rose meaning.

Roses are best known for their flowers. Roses are popular garden shrubs, as flowering shrubs. They are also grown as cut flowers, as one of the most popular and commonly sold florists' flowers.

A few roses are grown for scented foliage (such as Rosa rubiginosa, ornamental thorns, Rosa sericea or their ornamental fruit Rosa moyesii).

The leaves of most species are 5–15 centimetres long, pinnate, with (3–) 5–9 (–13) leaflets and basal stipules; the leaflets usually have a serrated margin, and often a few small prickles on the underside of the stem. The vast majority of roses are deciduous but a few (particularly in South east Asia) are evergreen or nearly so.

The rose has always been valued for its beauty and has a long history of symbolism. Roses are ancient symbols of love and beauty. 'Rose' means pink or red in a variety of languages (such as Romance languages, Greek, and Polish). The rose was sacred to a number of goddesses (including Isis and Aphrodite), and is often used as a symbol of the Virgin Mary. The ancient Greeks and Romans identified the rose with their goddesses of love referred to as Aphrodite and Venus. In Rome a wild rose would be placed on the door of a room where secret or confidential matters were discussed. The phrase sub rosa, or "under the rose", means to keep a secret — derived from this ancient Roman practice.

The China roses, based on Rosa chinensis, were cultivated in East Asia for centuries and finally reached Western Europe in the late 1700s. They are the parents of many of today's hybrid roses, and they brought a change to the form of the flower. Compared with the aforementioned European rose classes, the Chinese roses had less fragrant, smaller blooms carried over twiggier, more cold-sensitive shrubs. Yet they possessed the amazing ability to bloom repeatedly throughout the summer and into late autumn, unlike their European counterparts. The flowers of China roses were also notable for their tendency to "suntan," or darken over time — unlike the blooms of European roses, which tended to fade after opening. This made them highly desirable for hybridisation purposes in the early 1800s. According to Graham Stuart Thomas, China Roses are the class upon which modern roses are built.[7] Today's exhibition rose owes its form to the China genes, and the China Roses also brought slender buds which unfurl when opening. Tradition holds that four "stud China" roses ('Slater's Crimson China' (1792), 'Parsons' Pink China' (1793), and the Tea roses 'Hume's Blush Tea-scented China' (1809) and 'Parks' Yellow Tea-Scented China' (1824)) were brought to Europe in the late eighteenth and early nineteenth centuries; in fact there were rather more, at least five Chinas not counting the Teas having been imported.[8] This brought about the creation of the first classes of repeat-flowering Old Garden Roses, and later the Modern Garden Roses. Examples: 'Old Blush China', 'Mutabilis' (Butterfly Rose), 'Cramoisie Superieur'.

③ Move it into soil after it sprouts.

Rose on soil not ask for much, just with some humus soil aggregate

structure be good training as long as the following three links will make good growth:

① Rose is drought tolerant plants, but it is afraid floods. It is necessary use non-glazed bonsai pots of soil cultivation. The principle is "do not pour water on it when soil is not dry. Wet it completely when you pour water on soil."

② Lend a high concentration of fertilizer (especially fertilizers) will result in the death of local rot.

③ All plants need sunlight. Rose like sunshine too.

2. The seed surface is 1-2 times the diameter of the seed.

3.Our seeds are very easy to cultivate and the survival rate is very high.

Cover seeds with preservative films,and then,piercing the films to make several holes. Keep seeds covered in the daytime and uncover it in the night. Take off the preservative films when the seeds are half-germinated. The plant will be in a state of dormancy in summer and the leaves will turn yellow. Begginers should better use sand to cultivate the seeds.although the seeds will grow slower in the sand,the plants will be the most vigorous in the future. If you tend to use other kind of soil, try to use the kind with good water permeability,for example,the clay would not be a good choice. The soil should be disinfected by microwave oven before been used. Pay attention:the surface of the soil not be too dry, which is very important. When watering,all the soil should be wetted and there is no need to water in a cloudy day.

The pot could be 6-8cm in depth,it be an earthen basin or a plastic one. The volume of the soil should keep a distance of 1-2cm from the rim of the pot.