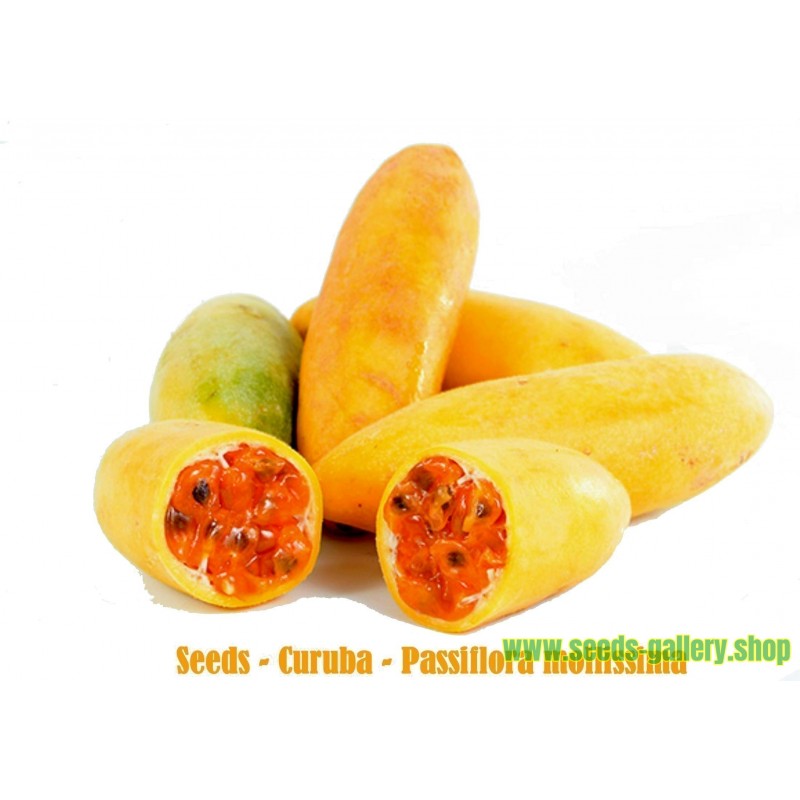 Banana passionfruit is the fruit of several plants in the genus Passiflora, and is therefore related to the passion fruit. They look somewhat like a straight, small banana with rounded ends. It was given this name in New Zealand, where passionfruit are also prevalent. In Hawaii, it is called banana poka. In its Latin American homeland, it is known as curuba, curuba de Castilla, or curuba sabanera blanca (Colombia); taxo, tacso, tagso, tauso (Ecuador); parcha, taxo (Venezuela), tumbo or curuba (Bolivia); tacso, tumbo, tumbo del norte, trompos, tintin or purpur (Peru).

There are several species of banana passion fruit, for example:

Mollissima and its close relative Passiflora mixta are vines with cylindrical stems densely coated with yellow hairs, and are vigorous climbers, growing up to seven metres. The leaves are a shiny green with clearly defined veins, the flower is large, pink and green petalled with a yellow and white centre. The fruit is yellow-orange when ripe and contains a sweet edible orange-colored pulp with black seeds.

The banana passionfruit is native to the Andean valleys from Venezuela to Bolivia. It was domesticated and cultivated since pre-Columbian times by various cultures of western South America before the Spanish Conquest and today it is commonly cultivated and its fruit are regularly sold in local markets. The vine is grown in California as an ornamental under the name "softleaf passionflower". It is grown to some extent in Hawaii and the State of Tamil Nadu, India.

P. tripartita var. mollissima and P. tarminiana were until recently considered to be one species, P. mollissima.

P. tarminiana and P. tripartita thrive in the climate of New Zealand. They are invasive species since they can smother forest margins and forest regrowth. It is illegal to sell, cultivate and distribute the plants.

Banana passionfruit vines are now smothering more than 200 square miles (520 km2) of native forest on the islands of Hawaii and Kauai. Seeds are spread by feral pigs, birds and humans. The vine can also be found all across the highlands of New Guinea.

It is considered an environmental weed in South Eastern Australia (Victoria, Tasmania and New South Wales), but not declared or considered noxious by any Australian state government authorities.

Banana passionfruit is used as rootstock for grafting the passionfruit varieties more commonly grown for food, especially in climates too cool for productive passionfruit growing. Regrowth from beneath the graft is one means of its outbreak as a weed, so growers should be vigilant for sprouting low on the main stem or from around the base of the plant, and should pull up and discard the plant when (typically after 6–9 years) the grafted passionfruit is no longer productive.

Keep the soil moist, not wet. A bright, warm place, approx. 25 °C, for the seeds would be fine.

Within 1-3 months the seeds will germinate, sometimes a bit longer.