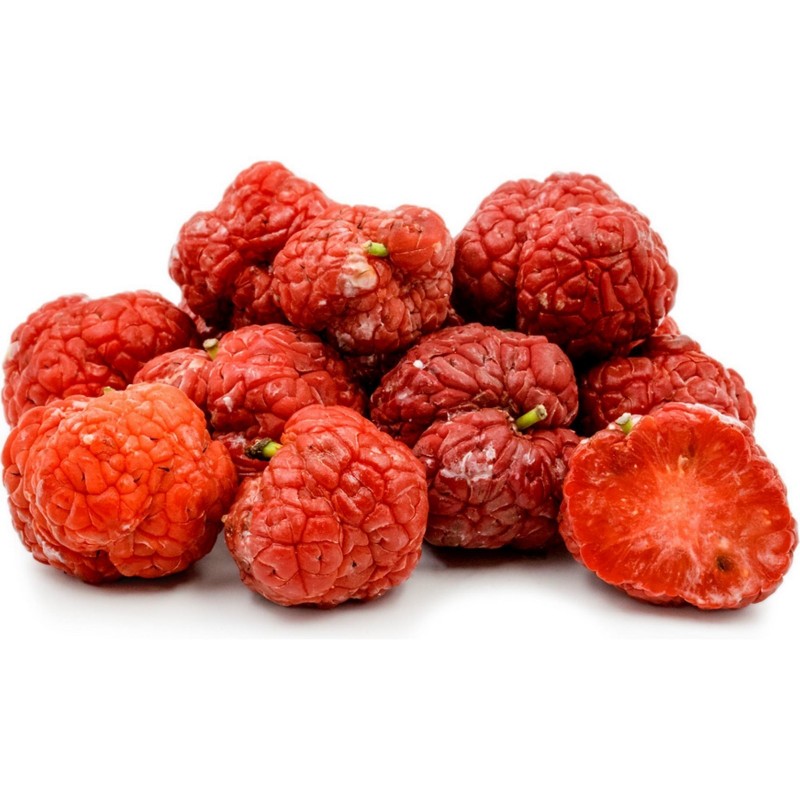 The Che fruit tree is a broad, spreading bush or small tree dotted with small thorns. Like its mulberry relatives, the fruits are technically not a berries but rather aggregates of tiny fleshy drupes clustered around a single stem. Somewhat resembling a lychee, they are round, approximately one to two inches in diameter and have a bumpy surface. The ripe fruits are an attractive red or maroon-red color with a juicy, rich red flesh with three to six small brown edible seeds. When fully ripe they have a soft texture and develop a watermelon-like flavor with hints of fig, mulberry and cotton candy.

Che fruit are best when very soft and almost overly ripe. They are often eaten out of hand or used like mulberries or figs. Mixing the ripe fruit in a blender and straining out the seeds yields a bright red, delicious juice. Che fruit have a low acid content and therefore benefit from the addition of citrus or other tart flavors. The fruit will keep for several days in a refrigerator in a covered dish.

While the White mulberry (Morus alba) is considered the ultimate food for silkworms, Che fruit leaves are a close second. The worms not only produce a superior silk from the leaves, but also high quality lute strings of the purest tone. The trees are also a favored specimen for the Japanese art of bonsai.

The earliest documentation of the Che fruit records them as native to many parts of eastern Asia from the Shantung and Kiangson Provinces of China to the Nepalese sub-Himalayas. It was the historic Silk Trade that brought all mulberries, including the Che fruit, into global commerce. It was introduced to France in 1862, England in 1872 and to the United States about 1909. The thrive in a sunny, warm location with rich, well-drained soil but have been successful in rock soils as well.