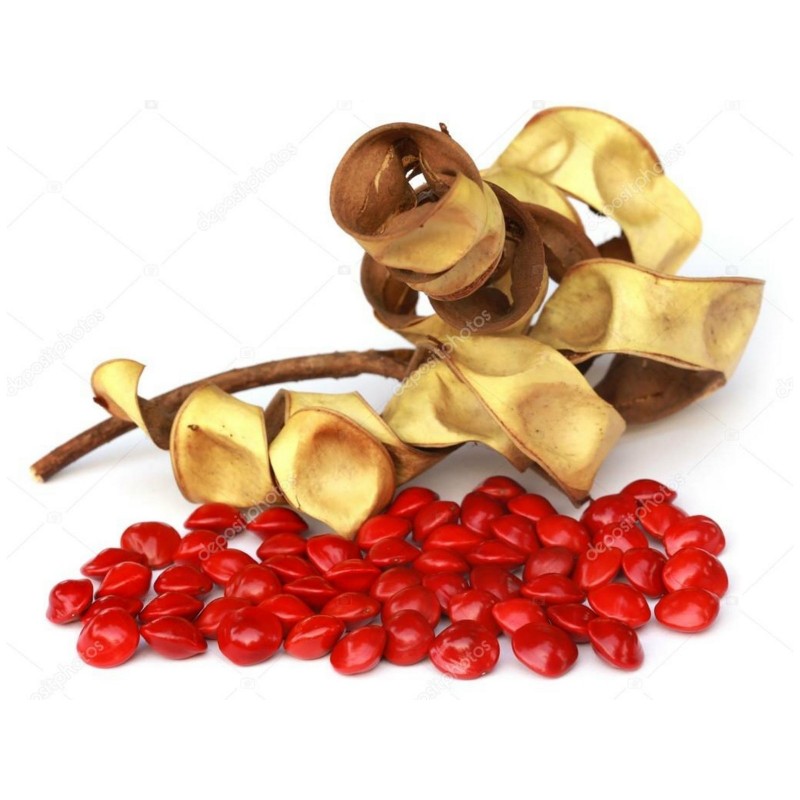 Adenanthera pavonina is a perennial and non-climbing species of leguminous tree. Its uses include food and drink, traditional medicine, and timber.

The tree is common within the tropics of the old world. It has also been introduced in the following countries of the America

This tree is useful for nitrogen fixation, and it is often cultivated for forage, as an ornamental garden plant or urban tree, and as a medicinal plant. For example, the young leaves can be cooked and eaten. The raw seeds are toxic, but may be eaten when cooked.

Adenanthera pavonina seeds have long been a symbol of love in China, and its name in Chinese is xiang si dou (Chinese: 相思豆), or "mutual love bean". The beauty of the seeds has led to them being used as beads for jewellery. Renowned botanist Edred Corner states that in India, the seeds have been used as units of weight for fine measures, of gold for instance, throughout recorded history because the seeds are known to be almost identical weights to each other.  Indeed, the Malay name for the tree, saga, has been traced to the Arabic for 'goldsmith'. The small, yellowish flower grows in dense drooping rat-tail flower heads, almost like catkins. The curved hanging pods, with a bulge opposite each seed, split open into two twisted halves to reveal the hard, scarlet seeds. This tree is used for making soap, and a red dye can be obtained from the wood. The wood, which is extremely hard, is also used in boat-building, making furniture and for firewood.

The tree is fast-growing, with an attractive, spreading canopy that makes it suitable as a shade tree, and for ornamental purposes in large gardens or parks. However, it is also known for producing lots of litter in the form of leaves, twigs and especially seed pods which crack open while still on the branch, so releasing their seeds, before themselves falling to the ground.

In traditional medicine, a decoction of the young leaves and bark of Adenanthera pavonina is used to treat diarrhoea.Also, the ground seeds are used to treat inflammation. Preliminary scientific studies appear to support these traditional uses. In vitro studies show that Adenanthera pavonina leaf extract has antibacterial activity against the intestinal pathogen Campylobacter jejuni. Also, high doses of seed extract have an anti-inflammatory effect in studies in rats and mice.