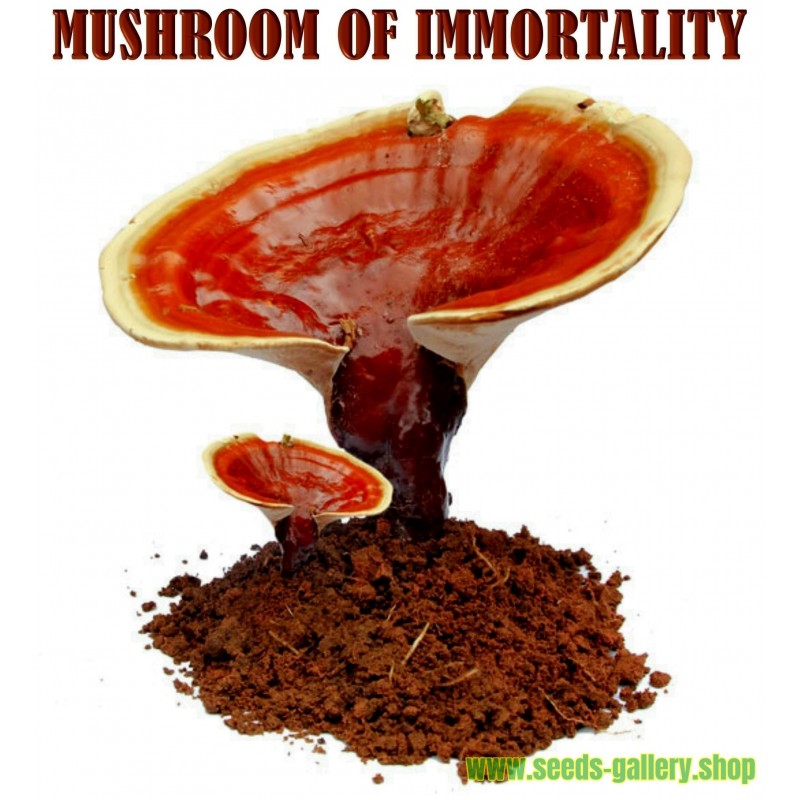 The lingzhi mushroom or reishi mushroom (traditional Chinese: 靈芝; pinyin: língzhī; Japanese: 霊芝; rōmaji: reishi; Vietnamese: linh chi; literally: "soul/spirit mushroom") is a species complex that encompasses several fungal species of the genus Ganoderma, most commonly the closely related species Ganoderma lucidum, Ganoderma tsugae, and Ganoderma lingzhi. G. lingzhi[1] enjoys special veneration in East Asia, where it has been used as a medicinal mushroom in traditional Chinese medicine for more than 2,000 years,[2] making it one of the oldest mushrooms known to have been used medicinally.

Lingzhi is a polypore mushroom that is soft (when fresh), corky, and flat, with a conspicuous red-varnished, kidney-shaped cap and, depending on specimen age, white to dull brown pores underneath.[9] It lacks gills on its underside and releases its spores through fine pores, leading to its morphological classification as a polypore.

Because of its bitter taste, lingzhi is traditionally prepared as a hot water extract product.[51] Thinly sliced or pulverized lingzhi (either fresh or dried) is added to a pot of boiling water, the water is then reduced to a simmer, and the pot is covered; the lingzhi is then simmered for two hours.[citation needed] The resulting liquid is fairly bitter in taste and dark, with the more active red lingzhi more bitter than the black. The process is sometimes repeated for additional concentration. Alternatively, it can be used as an ingredient in a formula decoction or used to make an extract (in liquid, capsule, or powder form). The more active red forms of lingzhi are far too bitter to be consumed in a soup.

A 2015 Cochrane database review found insufficient evidence to justify the use of G. lucidum as a first-line cancer treatment. It suggests that G. lucidum may have "benefit as an alternative adjunct to conventional treatment in consideration of its potential of enhancing tumour response and stimulating host immunity".[52] Existing studies do not support the use of G. lucidum for treatment of risk factors of cardiovascular disease in people with type 2 diabetes mellitus.

Ganoderma lucidum, and its close relative Ganoderma tsugae, grow in the northern Eastern Hemlock forests. These two species of bracket fungus have a worldwide distribution in both tropical and temperate geographical regions, growing as a parasite or saprotroph on a wide variety of trees.[9] Similar species of Ganoderma have been found growing in the Amazon.[26] In nature, lingzhi grows at the base and stumps of deciduous trees, especially maple.[27] Only two or three out of 10,000 such aged trees will have lingzhi growth, and therefore its wild form is extremely rare. Today, lingzhi is effectively cultivated on hardwood logs or sawdust/woodchips.

The word zhi 芝 occurs approximately 100 times in classical texts.[29] Occurrences in early Chinese histories, such as the (91 BCE) Shiji "Records of the Grand Historian" and (82 CE) Hanshu "Book of Han", predominantly refer to the "Mushroom of Immortality; elixir of life". They record that fangshi "masters of esoterica; alchemists; magicians", supposedly followers of Zou Yan (305–240 BCE), claimed to know secret locations like Mount Penglai where the magic zhi mushroom grew. Some sinologists propose that the mythical zhi 芝 derived from Indian legends about soma that reached China around the 3rd century BCE.[30] Fangshi courtiers convinced Qin and Han emperors, most notably Qin Shi Huang (r. 221–210 BCE) and Emperor Wu of Han (r. 141–87 BCE), to dispatch large expeditions (e.g., Xu Fu in 219 BCE) seeking the zhi Plant of Immortality, but none produced tangible results. Zhi occurrences in other classical texts often refer to an edible fungus. The Liji "Record of Ritual" lists zhi "lichens" as a type of condiment.[31] The Chuci "Song of the South" metaphorically mentions, "The holy herb is weeded out".[32] The Huainanzi "Philosophers of Huainan" records a zizhi 紫芝 "Purple Mushroom" Aphorism, "The zhi fungus grows on mountains, but it cannot grow on barren boulders."

Chi Zhi (Ganoderma rubra) is bitter and balanced. It mainly treats binding in the chest, boosts the heart qi, supplements the center, sharpens the wits, and [causes people] not to forget [i.e., improves the memory]. Protracted taking may make the body light, prevent senility, and prolong life so as to make one an immortal. Its other name is Dan Zhi (Cinnabar Ganoderma). It grows in mountains and valleys.[35][36]

While Chinese texts have recorded medicinal uses of lingzhi for more than 2,000 years, a few sources erroneously claim more than 4,000 years.[37] Modern scholarship accepts neither the historicity of Shennong "Divine Farmer" (legendary inventor of agriculture, traditionally r. 2737–2697 BCE) nor that he wrote the Shennong bencao jing[citation needed].

Tiny excresences. These grow deep in the mountains, at the base of large trees or beside springs. They may resemble buildings, palanquins and horses, dragon and tigers, human beings, or flying birds. They may be any of the five colors. They too number 120 for which there exist illustrations. All are to be sought and gathered while using Yu's Pace, and they are to be cut with a bone knife. When dried in the shade, powdered, and taken by the inch-square spoonful, they produce geniehood. Those of the intermediate class confer several thousands of years, and those of the lowest type a thousand years of life

Names for the lingzhi fungus have a two thousand-year history. The Chinese term lingzhi 靈芝 was first recorded during the Han dynasty (206 BC – 9 AD). Petter Adolf Karsten named the genus Ganoderma in 1881.

The fungus was given its first binomial name, Boletus lucidus, by English botanist William Curtis in 1781. The lingzhi's botanical names have Greek and Latin roots. The generic name Ganoderma derives from the Greek ganos γανος "brightness; sheen", hence "shining" and derma δερμα "skin".

The specific epithet lucidum is Latin for "shining". Tsugae is derived from the Japanese word for "hemlock" (tsuga 栂).

There are multiple species of lingzhi, scientifically known to be within the Ganoderma lucidum species complex and mycologists are researching the differences among species within this complex.

English lingzhi or ling chih (sometimes spelled "ling chi" from French EFEO Chinese transcription) is a Chinese loanword. The Oxford English Dictionary gives Chinese "líng divine + zhī fungus" as the origin of ling chih or lingzhi, and defines, "The fungus Ganoderma lucidum, believed in China to confer longevity and used as a symbol of this on Chinese ceramic ware."[15] The OED notes the earliest recorded usage of the Wade–Giles romanization ling chih in 1904,[16] and of the Pinyin lingzhi in 1980. In addition to the transliterated loanword, English names include "glossy ganoderma" and "shiny polyporus".